Sea temperatures around Scotland are affected by local climatic conditions (heat flux with atmosphere) and the heat transferred to the shores of Scotland by ocean currents (advective effects). Sea surface temperatures vary with an annual cycle, lagging behind the cycle of atmospheric temperature by around one month.

Average sea temperatures around Scotland reflect the influence of heat transported from oceanic waters. On average, winter temperatures on the west coast of Scotland are higher than those on the east coast. In summer this situation is reversed as waters in the shallower North Sea warm up more quickly, and so summer temperatures on the east coast are higher than on the west coast. The influence of the North Atlantic Current and climate system can also be observed in the long term variability of sea surface temperatures.

In deeper waters, the circulation patterns have a strong influence on temperatures. Cold Arctic waters fill the deep basins below about 800 m and intermediate waters lie between these and the warmer Atlantic waters above.

A towed CTD used to measure, amongst other parameters, temperature at the Stonehaven ecosystem monitoring site 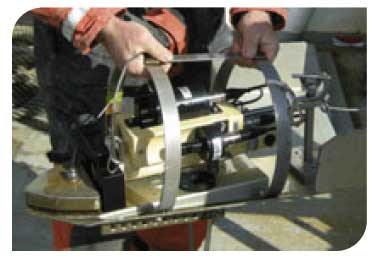 Sea surface temperature in the water around Scotland

Variation in water temperature off Stonehaven

Water temperature has been measured on a weekly basis at a site 3 km offshore of Stonehaven in the eastern North Sea, south of Aberdeen, since 1997. The station (56º57.8'N 02º06.2'W) is in a water depth of around 50 metres. Temperature is measured at both 1 m (surface; black line) and 45 m (near seabed; blue line). The annual variation shows the minimum occurring during February and the maximum around late August.

The harbour at Stonehaven, the base for the weekly sampling at a site 3 km offshore 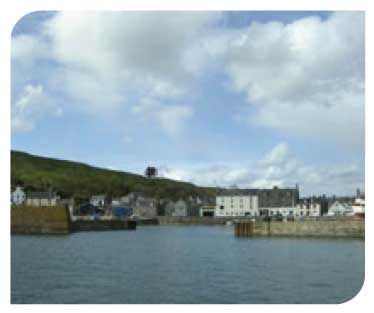 The Scottish Association for Marine Science ( SAMS) has been investigating temperature, salinity and flow variability on the European Shelf west of Scotland since 1982. The main time series are from the Tiree Passage mooring (T in map opposite) which has been maintained since June 1981, and a hydrographic section repeated at least annually across the shelf at approximately 56°N since 1975 (The Ellett Line). The overall trend for temperature variability on the continental shelf is of warming at a rate of +0.50ºC per decade. In addition it was found that the date of maximum annual temperature has been changing at the rate of 12 days per decade. Given the large inter-annual variation in temperature, a linear trend is a poor predictor of future temperature change. Furthermore, the seasonal timing trend is not indefinitely sustainable, and so neither should be used to predict future changes. 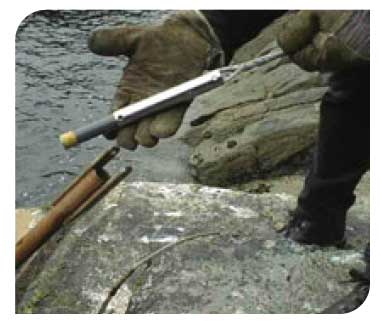 The dataset is created from a combination of satellite and in situ observations interpolated to provide complete coverage. OISST.v2 data provided by the NOAA/ OAR/ ESRLPSD, Boulder, Colorado, USA, from their web site at http://www.cdc.noaa.gov. (white line = Scottish Fisheries limits)

Salinity in the open sea is controlled by the balance between evaporation (fresh water out) and precipitation or run-off from land (fresh water in). In coastal waters, the direct input of fresh water from land run-off and rivers dominates the changes in salinity (figure below for Loch Ewe) and the salinity of many shelf areas is reduced as a result. Areas where fresh water inputs have high influence are the large estuaries and adjacent coastal waters of the Clyde, Solway Firth, Moray Firth, Firth of Tay and Firth of Forth as well as coastal areas on the west coast that receive a lot of fresh water from land runoff and numerous small rivers.

Many west coast Scottish sea lochs have restricted water exchange with the surrounding seas, particularly those with a sill at the mouth of the loch, and this means they can have salinities that differ considerably from those of the open sea.

Salinity can be an important factor determining the ecology of coastal communities. Moreover, depending upon flow rates in adjacent rivers, there will be large variations in salinity in some coastal regions. Since fresh water tends to sit on top of the denser salty water of the open sea, this variation can take place through the water column as well as geographically.

Variation in salinity measured on a weekly basis at a site 3 km offshore of Stonehaven in the eastern North Sea, south of Aberdeen. The station (56º57.8'N 02º06.2'W) is in water depth of around 50 m. The salinity has been recorded at both 1 m (surface: ---) and 45 m (near seabed: ---) since January 1997. Annual variation is observed as are periodic large, short term reductions in surface salinity.

Accurate salinity time-series are much shorter than those for temperature or currents. Between 2002 and mid-2009, shelf salinities have shown only weak seasonality. Variability peaks in October, and is smallest in May (Figure right).

Salinity anomalies (defined as deviations from the long-term average) show strong inter-annual variability. There was a prolonged decline in salinity from 2005 to 2007, suggesting a reduced influence of water from the Atlantic on the shelf during that time (Figure below right).

No single determining factor has been found for the movement of saline Atlantic Ocean waters across the shelf towards the Tiree Passage. Prolonged periods of high North Atlantic Oscillation index ( NAO) are found to coincide with periods of raised salinity of shelf waters ( NAO: high values of this index correspond to warm, wet and windy conditions over Scotland).

The oceans have, historically, been a net absorber of carbon dioxide (CO 2). This has reduced the rate of increase of CO 2 in the atmosphere. However, it also makes the oceans more acidic and potentially reduces their capacity to take up CO 2 in the future. Changing the acidity of sea water will have an impact on biogeochemical and ecosystem processes including planktonic calcification, carbon and nutrient assimilation, primary production and physiology. Since the Industrial Revolution, the CO 2 absorbed by the oceans has resulted in a decrease in pH of 0.1 units, but there are currently no baseline measurements of ocean acidity against which changes in UK waters can be judged. It will be some time before accurate judgements can be made about the rate of acidification relative to natural annual and inter-annual cycles.

Ocean acidification may impact the phytoplankton community in various ways. It may influence the calcification rates of some coccolithophore species such as Emilania huxleyi (pictured right; collected from a site off Stonehaven, North-East Scotland) as well as competition between phytoplankton groups with different carbon affinities. This includes the diatoms such as Thalassiosira (pictured right; sample collected from Loch nam Madadh, North Uist). 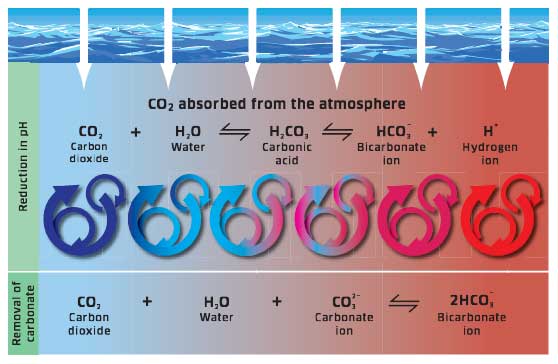