Sea surface waves are mainly caused by the effects of wind on the surface of the sea. Their height is predominantly determined by the fetch (i.e. distance wind has blown over) and length of time of the wind forcing. Some local modification of wave height can be caused by tides. The seabed also influences waves in shallow water as waves will become steeper and higher as they approach the shore.

Within Scottish waters, the wave climate is mainly influenced by conditions in the North Atlantic ocean, where the fetch is long enough to establish large, regular waves known as swell. The north and west of Scotland (Hebrides, Orkney and Shetland) are most exposed to these conditions. On the east coast of Scotland, conditions in autumn and winter may also be rough in the North Sea because the wind direction can lead to a large fetch. Moreover, the Moray Firth is also relatively exposed because of its shoaling bathymetry and exposure to the North Sea.

Seas breaking over the breakwater at Aberdeen Harbour 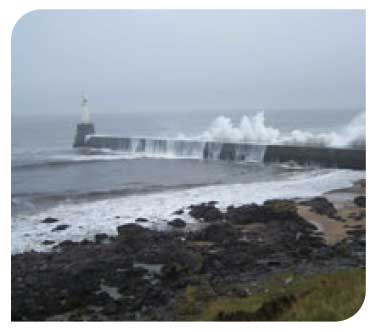 Fishing vessel ploughing through the sea 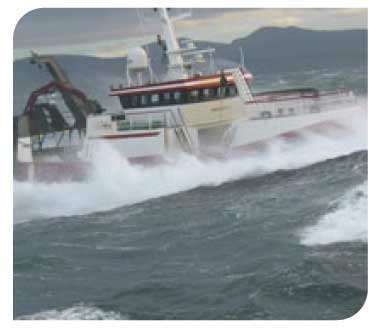 Annual mean significant wave height (m) (the average height of the highest 1/ 3 of waves). The wave height is greatest in the Atlantic, moderate in the North Sea and least in the immediate coastal zone where the values are generally < 1.2 m.

Sea levels are affected over short timescales by the rise and fall of the tide as well as the effects of storm surges. Over longer timescales, the sea level is affected by global climate change and movements of land masses relative to the Earth's crust.

The principal tidal components are the semi-diurnal (twice daily) tides although in some limited regions the diurnal (daily) tides are significant. The UK Tide Gauge Network, run by the Tide Gauge Inspectorate, records tidal elevations at a number of locations around the UK coast of which 11 are currently operating in Scotland. These measurements, together with those provided by the Scottish Environment Protection Agency ( SEPA) Tide Gauge Network, provide a long time series of sea level data. Annual mean sea level is the height of the sea averaged over a year. This removes short term fluctuations caused by waves and tides. Across the UK, mean sea level changes seasonally because of thermal expansion by approximately 10 cm (range), and is at a maximum in late summer.

Trends in sea level vary greatly at different sites. Much of this variation is probably caused by differential rates at which the land on which the tide gauges sit is moving up. This movement is caused by the land continuing to rise after the removal of the weight of ice after the Ice Age.

The rate of sea level rise around the UK coast, adjusted for land movements, was about 1.4 mm per year during the 20th Century.

Tidal surges caused by storms do occur in Scotland, and mainly affect the east coast. However, storm surges are less significant around Scotland than in regions further south because of the way that the surges grow as they propagate southward. For example, the most significant storm surge ever recorded over the last 100 years occurred in 1953. During that event surge levels of 0.60 m and 0.83 m were recorded at Aberdeen and Leith respectively, but reached 2.97 m in southern England (Kings Lynn) and 3.36 m in the Netherlands. The 1 in 50 year storm surge predictions for Scotland are around 1.25 m.