Oil and gas exploration and exploitation has been a major activity in Scottish offshore waters since the late 1960s. Most oil and gas fields on the United Kingdom Continental Shelf ( UKCS) are located in the North Sea. Only the Beatrice Field in the Moray Firth is close to shore and within the 12 nautical mile Territorial Sea limit. The remainder are much further offshore, within the 200 nautical mile limit. Since 1977 there has also been activity to the area west of Shetland following the discovery of the Clair Field.

There is extensive infrastructure associated with these oil and gas developments including seabed and platform-mounted production facilities and networks of pipelines bringing oil and gas ashore for processing. The shore-side reception facilities include the gas terminal at St Fergus in Aberdeenshire and the Sullom Voe oil terminal in Shetland, the largest oil terminal in Europe. There are three interconnector pipelines in the south west which take gas across the Irish Sea. There is no gas storage activity in Scottish waters, currently.

Source: based on SeaZone and DEAL data 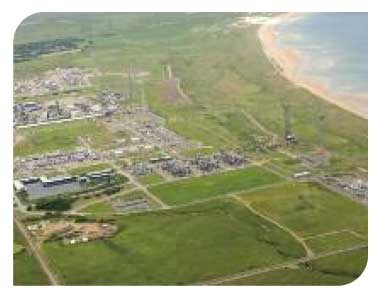 Responsibility for the oil and gas sector is reserved to the UK Government and all taxes go to the UK Treasury. The industry is the largest industrial contributor to the UK's GVA. Its' value to the UK economy was estimated to be £37 billion in 2008 (3). Based on the ABI figures, the GVA of the oil and gas sector in Scotland has been calculated as £16.033 billion in 2007 (at 2009 prices). The economic contribution of pipelines is included in the overall oil and gas value as they are part of the production process.

Offshore activity is supported by a highly specialised supply chain which supports a large downstream manufacturing sector. In 2008, supply chain exports were in the range of £4 billion to £5 billion.

The oil and gas industry continues to be a major employer. Oil & Gas UK estimates that in 2010 some 196,000 Scottish based jobs were supported by the servicing of activity on the UKCS and in the export of oil and gas related goods and services. This includes not just direct employment but also wider effects on the supply chain.

Pressure: Noise from seismic exploration activities
Impact: Potential impacts on noise sensitive species such as cetaceans and some fish species.

Pressure: Physical presence of structures
Impact: Loss of species and habitat within the footprint of the structure. Colonisation of structures by organisms. Behavioural changes, death or injury of birds through interactions/ collisions with surface structures.

Pressure: Habitat damage
Impact: Loss of habitat and species in the 'footprint' of the pipeline. Physical disturbance of seabed substrata causing sediment re-suspension and increased turbidity.

Pressure: Habitat change
Impact: Seabed pipelines and vertical concrete and steel jacket structures provide a hard substratum for a variety of sessile epibenthic species to colonise and provide shelter for fish. Many of these changes may be beneficial. 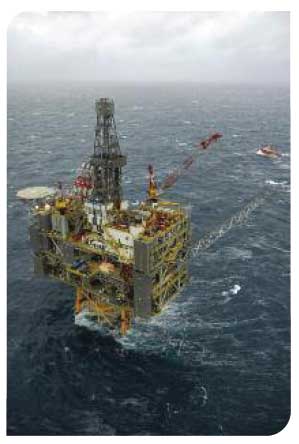 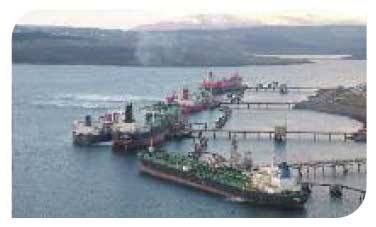 Scottish waters are a mature oil and gas province but there could be up to 24 billion barrels of oil still to be recovered from the UKCS(5), compared with 39.5 billion so far recovered. These are mainly in discoveries awaiting development, areas under current licence or regions where oil can be expected to be found, but has not yet been explored. Based on the average price of oil and gas forecast by the Energy Information Administration between 2009 and 2030, the wholesale gross value of these remaining reserves may be between £650 billion and £1.1 trillion.

A significant area with unexploited gas reserves lies to the west of Shetland. A new gas export pipeline from this area is currently being built to support the output from the Laggan and Tormore fields which are scheduled to start production in 2014. The amount of oil and gas imported into the UK is also likely to increase (5), requiring further gas pipeline import projects but none of the currently planned pipelines are in Scottish waters.

The longevity of the industry will depend on commodity prices, exploration and operational costs over the medium to long term and the ability to secure investment to fund new exploration and extraction activities.

Over the next thirty years decommissioning the offshore infrastructure will be a significant activity. Its timing will be influenced by a range of factors including long term trends in oil and gas prices, increased recovery of oil and gas from existing fields, future fiscal and regulatory regimes, reduction of decommissioning costs and technical innovations.

A potential new activity will be the use of depleted fields to store carbon dioxide captured onshore (see CCS section). When the geological conditions allow, depleted fields can be used as sites for the storage of gases generally (as a holding area) although these have not been developed in Scottish waters.

The skills and knowledge developed in the North Sea are still vital for the oil and gas sector but can also be transferred to other sectors such as renewable energy.