Abstraction involves taking water, via pipe, from the sea, using it for an industrial process and then returning it to the sea. Most abstracted water is used for cooling. There is a limit placed on the temperature at which water can be returned. The majority of coastal water abstractions, by volume, are for power stations (98% or 20.2M m 3 per day). The remainder 2% or 0.4M m 3 per day are for use by the fish processing and manufacturing industries. Cooling water used by ships is not included here.

A large power station may abstract up to 200m 3/second or more during peak load for cooling from either coastal or estuarine waters. In most cases non-evaporative cooling is used where the steam turbine exhausts are cooled via the main condensers before the water is discharged back to the sea. Evaporative cooling is often used by power stations located inland which use cooling towers to recycle the water.

Other uses include the operation of fish farms and fish processing factories, manufacture of food, wood and chemical products, agriculture, marine animal sanctuaries and navigation abstractions to maintain water levels in impounded docks. Use is also made by the construction industry (for use as a raw material) and by the defence industry. 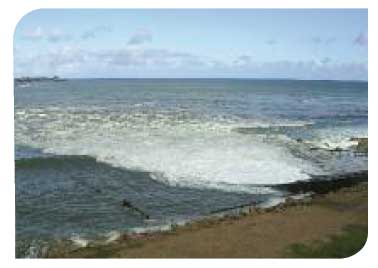 Water abstraction can create efficiency savings but does not generate a measurable economic value by itself. It is therefore not possible to measure its contribution in terms of GVA or employee jobs. However, it is clear that such abstractions are fundamental to sustaining certain key economic activities. The Charting Progress 2 approach (1) calculates the UK annual market value of electricity sales from coastal power stations as between £5 billion and £10 billion and attributes £100-200 million to coastal station production based on a 2% energy efficiency advantage over air cooled power stations. As there are about 25% of UK stations in Scotland, a value of between £25M and £50M per annum has been estimated. There are many other industries which abstract water, and other assumptions, that have not been taken into account in the assessment of economic value. However, the valuation highlights that coastal waters have an economic value for industry, even if there is difficulty in calculating it. Given the assumptions, it would not be appropriate to split this figure between the sea areas.

Fish entrapment is a commercially sensitive subject and there have been few studies on the matter. 'Fish Mortality by impingement on the cooling water intake screens of Britain's' largest direct-cooled power station', estimated that nearly 1.25 x 107 (95%c.i.: 7.10 x 106 - 2.21 x 107) fish weighing almost 74 t (43.0 - 127.8 t) were trapped at Longannet Power Station in 1999. Of these, the clupeids sprat and herring comprised 85%. However, inter-annual variation can be large. At nearby Kincardine the mass of dead fish increased from 10 t between June 1961 and November 1962 to 150 t in December 1962. A fish return system is being installed at Longannet to reduce mortality and return all fish (alive and dead) to the estuary to mitigate the impact on the estuarine ecosystem (5).

Pressure: Water flow changes (local)
Impact: Changes in water flow due to water intake pipes. Any scour effects are predicted to be localised. The main impact would be the removal of species.

Pressure theme: Pollution and other chemical pressures
Pressure: Pollution
Impact: Chlorine biocides and oxidants used to limit biofouling organisms. Studies have shown that fish livers may accumulate chlorinated by-products but harmful effects have not been discovered. (3)

Pressure theme: Biological pressures
Pressure: Species level pressures
Impact: Removal of species via cooling water inflows, number of fish impinged on the intake screens is proportional to the volume of water abstracted. Biological impingement and entrainment typically consists of fish, seaweeds, jellyfish, other macro-invertebrates and planktonic species. Considered less of a threat at coastal abstractions due to larger water body. 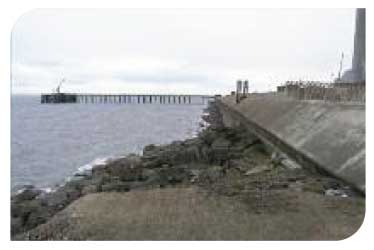 Water abstraction is generally important for industry and for economic growth but new development is led by the needs of industry and markets. Water abstraction is likely to continue at close to its current level and may increase in future. There is a strong possibility that electricity generation capacity will be built in future, so the need for abstraction for energy production is likely to continue even though the current emphasis is on renewable energy production. The Scottish Government's second National Planning Framework (6) identifies opportunities for generation at Longannet, Cockenzie, Boddam and Hunterston. Locations of future water intakes may need careful consideration, particularly if proposed for narrow estuaries that are important for protected habitats and species.