As a maritime nation with responsibility for about 6 times as much sea as land, Scotland has a long history of marine management, monitoring, research and education.

Marine Scotland, a directorate of Scottish Government established in April 2009, is responsible for the integrated management of Scotland's seas out to the fisheries limits, generally 200 nautical miles. Its' duties cover marine planning, policy development, licensing and enforcement, as well as scientific research, monitoring and assessment of the state of the seas.

Marine Scotland is the guardian of the marine vision of 'clean, healthy, safe, productive, biologically diverse marine and coastal environments, managed to meet the long-term needs of people and nature' and is implementing the Marine (Scotland) Act 2010. It also licenses a variety of activities which will be under the new Marine Licence regime from April 2011.

There is a range of other management structures which have a marine element, including:

The Scottish Environment Protection Agency ( SEPA), a non-departmental public body established in 1996, is Scotland's environmental regulator and accountable through Ministers to the Scottish Parliament. SEPA's aim is to provide an effective and integrated environmental protection system which will both improve the environment and contribute to sustainable economic growth and a greener and healthier Scotland. It works with Marine Scotland and others to achieve the marine vision and has powers from the coast out to 3 nautical miles. The main marine legislation used by SEPA includes various EC Directives, such as the Water Framework Directive, which aims to achieve good ecological status for all waters out to 3 nautical miles.

There are two bodies providing nature conservation advice. The main role of Scottish Natural Heritage ( SNH), an agency established in 1992, is to promote, care for and improve the natural heritage, help people enjoy it responsibly, enable greater understanding and awareness of it and promote its sustainable use, now and for future generations. It has responsibilities for the marine environment from the coast out to the limits of territorial waters.

There are also two national cultural heritage bodies with complementary functions. Historic Scotland is an executive agency of the Scottish Government charged with safeguarding the nation's historic environment and promoting its understanding and enjoyment. The Royal Commission on the Ancient and Historical Monuments of Scotland ( RCAHMS) collects, records and interprets information on the architectural, industrial, archaeological and maritime heritage of Scotland.

The Crown Estate Commissioners is a UK public body that manages about 55% of the foreshore and all the seabed in Scotland out to the 12 nautical mile limit on behalf of the Crown. They also manage the rights to minerals, except hydrocarbons, beyond 12 nautical miles.

Many other bodies exercise marine management and consenting roles in Scottish waters. For example, the Department of Energy and Climate Change has responsibility for the oil and gas regime, the Department for Transport for shipping and the Ministry of Defence for military activity.

The Knowledge-based Sustainable Management for Europe's Seas (KnowSeas) project is supported by the European Commission under the Environment (including climate change) Theme of the 7th Framework Programme for Research and Technological Development. The 4 year project, started in April 2009, has 30 partners from 15 countries and is coordinated by the Scottish Association for Marine Science. (1)

The Marine Alliance for Science and Technology for Scotland ( MASTS) was established in 2009 and pools the work of around 700 researchers in marine science from across Scotland. This includes much of the marine research in Scottish universities. MASTS' objective is to ensure coordination across marine science in Scotland so that it can remain internationally competitive. One of the policy related initiatives underway, at the Scottish Association for Marine Science (part of the UHI Millennium Institute), is KnowSeas. Non-environmental marine expertise is provided at university centres such as engineering at Robert Gordon, Strathclyde, Heriot Watt and marine law at Dundee.

There is a range of other education structures for various sectors. For example:

Contribution to the economy and to marine science

The ABI provides figures for the education sector. However, the data only include private institutions and do not identify a separate marine component. As education does not generate a physical, measurable output, it is difficult to establish an accurate figure of its value and contribution to the economy.

However, examining marine research expenditure demonstrates that the sector has a valuable economic role. For example, MASTS represents a combined research expenditure of about £60M per year. In addition, NERC, Marine Scotland, SEPA, SNH and JNCC spend about £40M per year on research although some of this is also included in the MASTS figure. The Universities of St. Andrews and Stirling and the UHI Millennium Institute have the largest amount of marine research spend among Scottish higher education institutions. 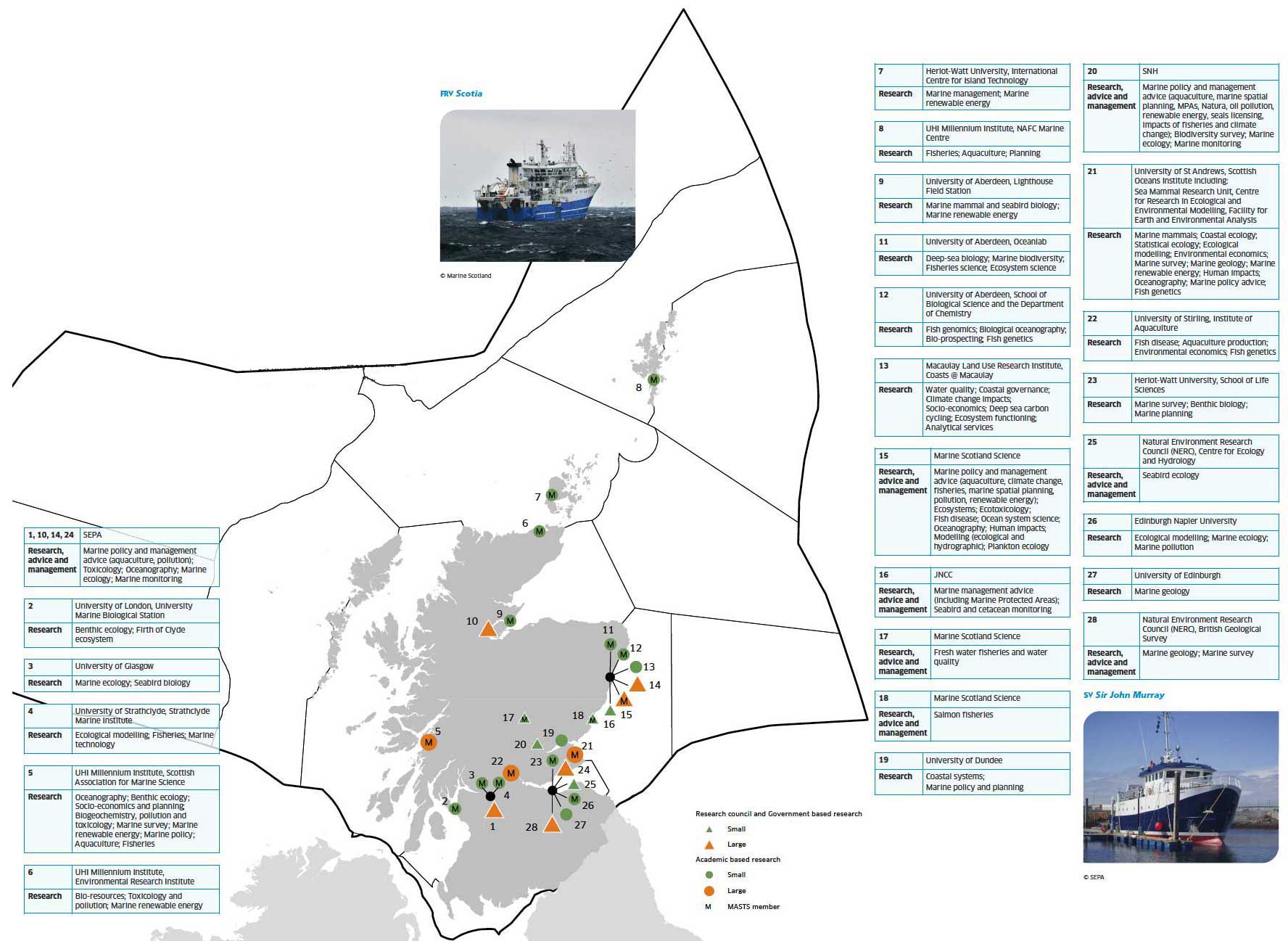 Research and development partnerships with industry

SARF - Scottish Aquaculture Research Forum is a registered charity and an independent company whose main aim is to support research into aquaculture and related areas. It was established as a priority action under the Strategic Framework for Scottish Aquaculture in 2004 and receives Scottish Government financial support. (5) 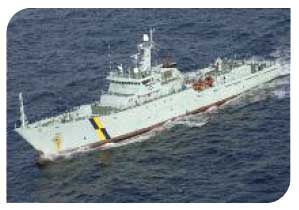 Existing work in the research community will inform future marine policy development and implementation. The Scottish Marine Science Strategy will identify government's priority areas to investigate and there is likely to be a need for collaborative research and effort and a new emphasis on understanding the socio-economics of marine activities. It is likely that knowledge will emerge on: