Historic ships, maritime museums, festivals of the sea, world heritage sites, scheduled monuments and designated wrecks are tangible aspects of Scotland's historic environment and cultural heritage. Also included are the remains of settlements from prehistory to the modern day such as harbours, lighthouses and ship-building yards; ecclesiastical buildings and defensive features from castles to war-time defences. They help to create a sense of place, wellbeing and identity, enhancing the distinctiveness of the coast and attracting visitors to Scotland. Scuba divers visit underwater wrecks of ships and aircraft, while in some areas archaeological sites once on land may now be submerged because of changes in the coastline and sea level since the last ice age, offering the potential of fresh insights into the settlement of Scotland.

Cultural heritage sites which make a contribution to the economy fall into two categories. First, those which lie wholly within the marine environment, such as shipwrecks. Second, those on land, where the sea forms an integral part of their identity such as lighthouses, maritime museums, coastal castles and island monasteries. A survey undertaken to obtain data for this atlas (1) reveals a lack of official statistics (for example, from the ABI) for this sector. However, many heritage sites (e.g. historic harbours and lighthouses) are in commercial use and others generate economic value from tourism. Cultural heritage makes a valuable contribution to Scotland's economy, although this is not currently reflected by official data.

Visitor income (ticket sales and other visitor expenditure) was £1.55 million in 2008 for the 20 of 97 managed and visitable coastal heritage sites that provided economic data. Limited availability of these data (due both to commercial confidentiality and the fact that some sites do not keep visitor number data) means that the values shown significantly underestimate the contribution to the economy, so it would not be appropriate to present regional figures. In addition, some sites, including shipwrecks offshore, can be visited for free, so do not contribute directly to the economy, but do contribute to less tangible social benefits such as education, health and well-being. However as a pointer to the wider economic picture, VisitScotland statistics indicate that approximately 83% of visitors come to Scotland primarily to visit historic sites (1).

The heritage tourism sector provides employment for staff with particular skills and knowledge including craftsmen and curators, as well as shop staff and guides. Trend data obtained for the 13 staffed Historic Scotland Properties in Care showed 23 full-time and 21 part-time in 2004 employees and 20 full-time and 23 part-time in 2009 (1). However as employment data have only been obtained for 13 out of the 97 managed and visitable heritage sites, the true number of jobs directly associated with coastal and marine cultural heritage will be significantly greater.

Kisimul Castle, Barra - the sea and coast define the setting 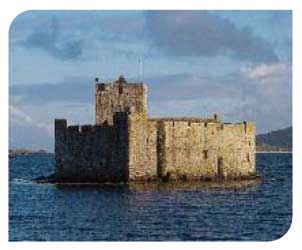 Source: Marine Scotland (1)
Note: * 'Managed and visitable sites' are those assessed by the survey for this atlas as being staffed and/or where visitor or income statistics are likely to have been kept.

Source: Historic Scotland
Notes: (*) identified as entirely in the marine zone - i.e. subtidal or located between high and low water; many other scheduled monuments and listed buildings along the coast have some marine elements
(**) administered by Ministry of Defence under Protection of Military Remains Act 1986
(***) Historic Scotland Coastal Zone Assessment Surveys have recorded c. 12000 sites along 30% of the Scottish coastal zone since 1997. The number of sites around the entire Scottish coast will be significantly larger.
(****) only about 1600 are identified sites where demonstrable remains have been located on the seabed 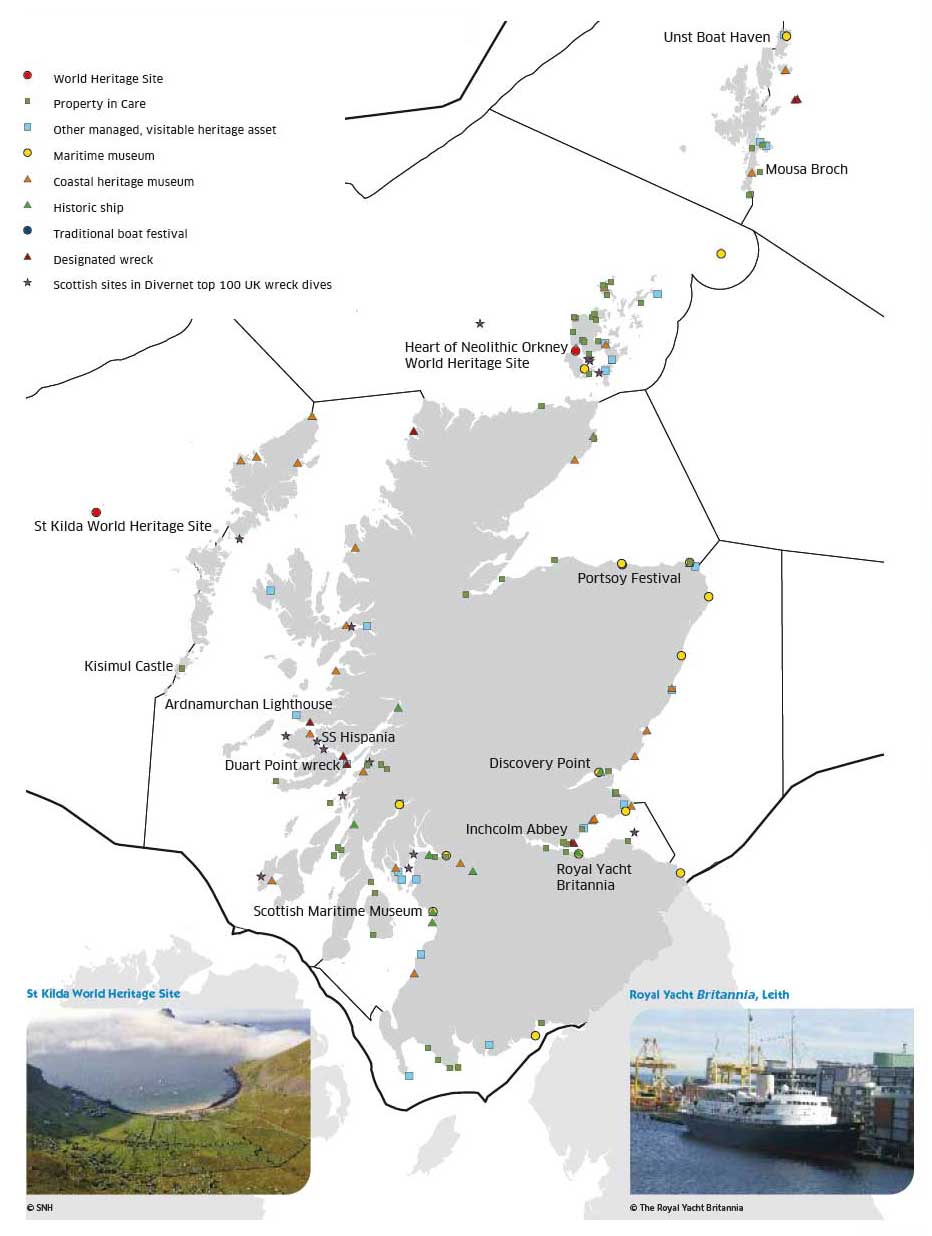 Pressures and impacts: heritage assets and the wider environment

Pressure theme: Pollution and other chemical pressures
Pressure: Pollution
Impact: From substances within wrecks of ships and aircraft, and some coastal structures

A recent study for the MCA, Potentially Polluting Wrecks Project, should provide data on pollution from wrecks in future. The HMS Royal Oak (Scapa Flow, Orkney) is known to leak oil but this is monitored and recovered.

Pressures and impacts: heritage tourism and the wider environment

Pressure theme: Other physical pressures
Pressure: Litter/pollution
Impact: Transport to access sites, waste water from visitor facilities and litter can all impact on the environment if not managed properly, Tourism and recreation can be a source of litter. Can impact on wildlife through ingestion, entanglement and smothering.

Pressure: Removal of marine fauna and flora
Impact: Visitors may collect marine species as souvenirs or remove for consumption.

The spatial footprint of heritage assets within the marine environment can be difficult to assess as most information is available as point rather than spatial data. However, the majority of heritage assets cover a very small area of seabed. Coastal sites on land are easier to define, but likewise tend to occupy comparatively small and discrete areas, although there can be more dense concentrations of individual sites along some sections of coast. Taking into account the net positive and negative effects outlined above, the overall impact is therefore considered most likely to be neutral (1).

The SCAPE Trust The Shorewatch initiative has involved the public in monitoring the risk posed by erosion on archaeological sites along the coast, for example at the Brora Saltpans, Sutherland.

The Nautical Archaeology Society Encourages public participation in the recording and conservation of coastal and marine heritage and organises internationally recognised training courses.

Wrecks and diving tourism Scotland has 16 wrecks listed in the top 100 UK wreck dives (2) (for example SS Hispania, Sound of Mull) and an estimated 15,260 dives were carried out on the wrecks of the German High Seas fleet (Orkney) in 2006 (3).

Lord of the Isles Galley Trust In 1991 the Trust built the 'birlinn' (west highland galley) Aileach. Aileach is used as a sailing and training vessel and has appeared in eight television programmes.

Far less is known about marine cultural heritage than about sites on land. Understanding more about the resource is a priority for effective management. Evidence from the 17th-century Duart Point wreck suggests that outstanding levels of preservation can occur where seabed conditions allow and disturbance is avoided. However, large numbers of relatively recent wrecks are in a phase of irreversible decay. Also coastal erosion for some of the Scottish coast is likely to continue to pose a significant threat to coastal heritage.

Heritage assets are vulnerable to a wide range of man-made and natural processes. Careful management is needed to ensure that future marine activities and developments are carried out in a way that respects the historic and cultural heritage, the setting of important coastal heritage assets and protects these for the benefit of future generations. Where natural processes present the risk, the challenge is to develop and prioritise effective responses to help conserve the most important sites and to mitigate loss where necessary and possible.

There has been a general increase in visitors to historic sites but this trend may reverse in the short term given the current economic climate. Underwater heritage remains accessible to relatively few, but digital technology is presenting new opportunities to promote this resource beyond the diving world. 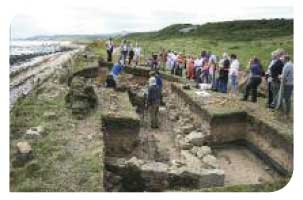 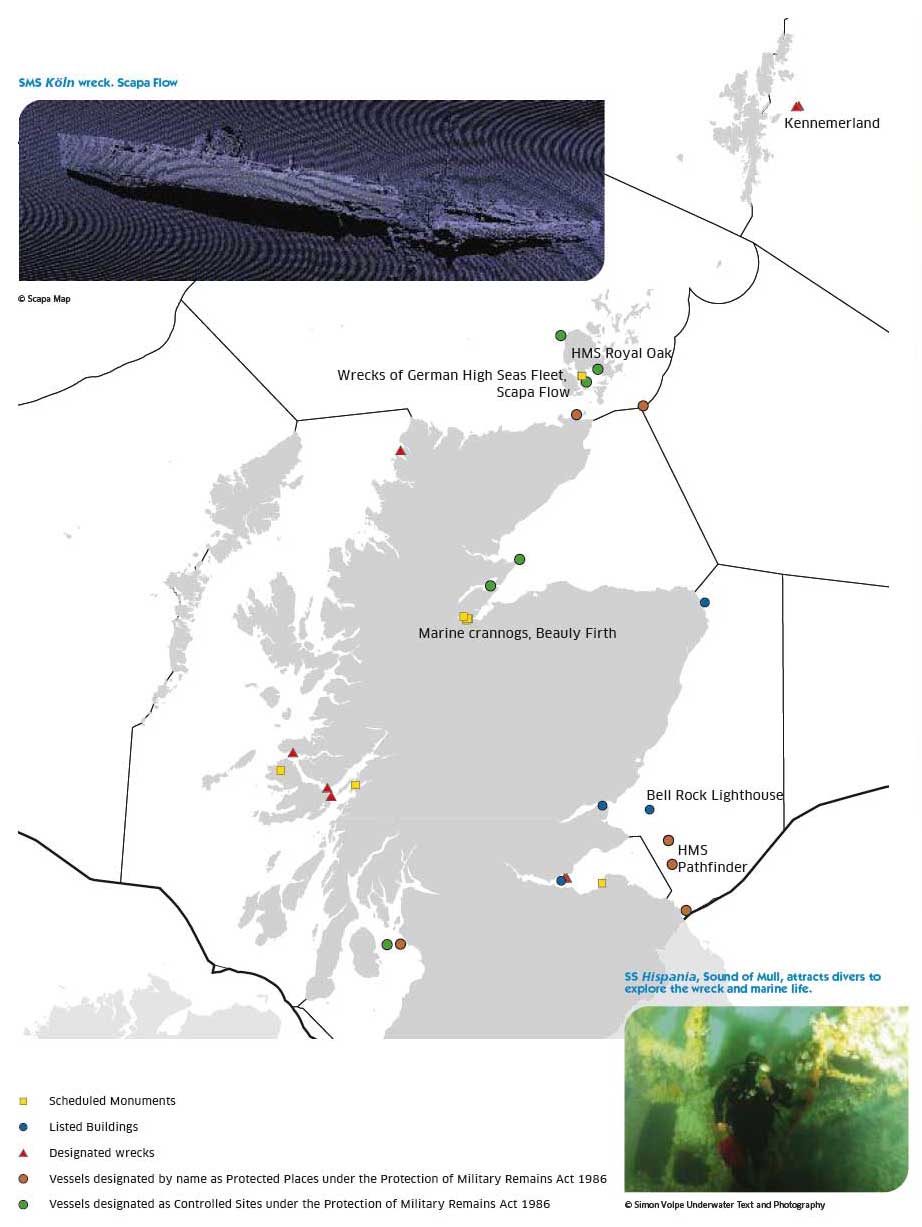