Why is marine litter a problem?

Significant quantities of marine litter appear in our seas and on our beaches. Litter is unsightly and can cause harm to marine wildlife through entanglement and ingestion, smothering of the seabed and as a platform for invasive species. The presence of sewage-related debris ( SRD) also suggests that adjacent waters are contaminated by sewage, which constitutes a health risk to water users. Plastics are the main type of litter found both on beaches and offshore, including increasing quantities of microscopic pieces of plastic resulting from degradation of larger plastic products in the sea. Marine litter originates from the land, ships and carried on currents from other countries.

The density and type of litter found on beaches has been recorded on annual surveys organised by the Marine Conservation Society since 1993. The surveys take place on the third weekend of September, in line with the International Coastal Clean Up and rely on volunteers to select and survey a beach. A record 61 Scottish beaches were surveyed and cleaned during the Beachwatch Big Weekend 2009. Only a few beaches in remote areas were included.

Sources of litter on Scottish beaches

The main sources of beach litter in Scotland were public litter (dropped by visitors to the beach), sewage related debris ( SRD), fishing litter and shipping litter. Plastic items made up the bulk of the material found, accounting for around 70% of the total litter. Every year a large percentage of litter cannot be confidently associated with a specific source. This 'non sourced litter' consists of small unidentifiable fragments or items that could have come from many different sources. 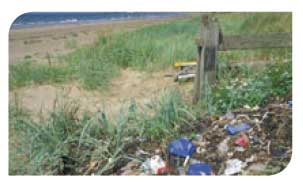 How does this compare with the UK?

The proportion of sewage related debris found on Scottish beaches (19%) is higher than the UK average (5.5%) and exceptionally high numbers of cotton buds are found at beaches in the Clyde. Sewage related debris enters the water from combined sewer overflows which activate to release excess water from the sewerage network during storms. Some overflows are screened to trap this material but small items such as cotton buds can pass through these screens. Many of the overflows in the Clyde are not screened so cotton buds and other small non degradable items are carried by tidal currents to beaches where they accumulate and cause an aesthetic nuisance. 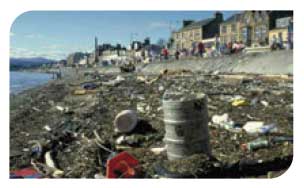 Scottish Water's 'Bag It and Bin It' campaign aims to reduce sewage related debris on beaches by encouraging the public not to dispose of unsuitable items, such as cotton buds, via the sewerage network.

Both beach and offshore litter surveys have shown that the majority of litter is made of plastic. Plastic litter can take hundreds, if not thousands, of years to break down, fragmenting into small pieces, and it may never truly biodegrade. The potential toxicity of degraded micro-particles of plastics is not fully understood, although it is thought that these can act as a mechanism by which toxic chemicals may enter the food chain.

Litter on shore at Arrochar 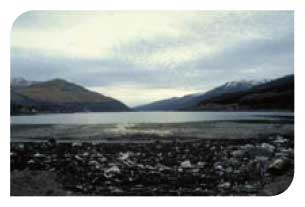 What do we know about seabed litter?

The Fishing for Litter scheme encourages fishermen to bring back to port litter brought up in fishing nets and gear. The litter is monitored on the quayside and then sent for proper disposal. During the project in Scotland from 2005 to 2008 15 harbours and 117 vessels took part in the scheme collecting just over 117 tonnes of litter. Plastic and polystyrene were the predominant types of litter found ( KIMO 2008).

The International Convention for the Prevention of Marine Pollution from ships banned the dumping of plastic in 1989 and regulates the disposal of other waste. 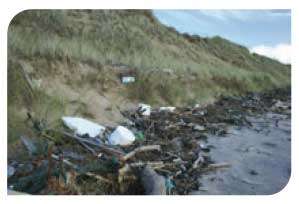 The importance of tackling the problems caused by marine litter has been highlighted in the EU Marine Strategy Framework Directive ( MSFD), which includes marine litter as one of eleven high level descriptors of good environmental status ( GES).

What can be done to reduce marine litter?

Whilst marine litter would appear to be a largely preventable issue, the wide range of sources of litter, the number of pathways by which it enters the marine environment, and the fact that litter can be easily transported by winds and currents, makes it difficult to tackle. Overall there appears to have been a slight decrease in average beach litter density recorded since 1996 but it is very variable.

At present responsibility for regulating marine litter is spread across several UK bodies e.g. Local Authorities, Scottish Government and the Maritime and Coastguard Agency. Further efforts need to be made to help all bodies or agencies responsible for litter to coordinate efforts and to enable them to fully enforce existing legislation.

The Scottish Government is developing a Marine Litter Strategy to reduce impacts of litter on our Coasts and Seas.

Scottish Beaches surveyed in the Beachwatch Big Weekend in 2009

The average litter density recorded in the 2009 Beachwatch survey in Scotland was 1,908 items/kilometre, this is higher than the UK average of 1,849 items/kilometre but a decrease of 26% from 2008 results. Average beach litter density has declined since 1996 although there is large inter annual variation.

Average litter density in Scotland compared to the UK average