Over 240 species of fish inhabit the seas around Scotland. Assessing their overall 'health' is difficult: defining 'health' is problematic and there are large gaps in the data. With this in mind, Marine Scotland Science undertook an investigation into the state of the demersal (generally living on or near the sea bed) fish community in Scottish waters. This work was done specifically for this publication. However, it employed a similar approach to comparable assessments for the UK's Charting Progress 2 and OSPAR's Quality Status Report.

Scientific trawl surveys are widely used to assess change in the status of demersal fish communities. The data collected are ideal for generating quantitative measures of particular characteristics of the fish community, and these can be used to monitor change in those characteristics over time and between different places. These measures are referred to as community indicators. OSPAR use a "large fish indicator", defined as the proportion of fish (by weight) in the community that is greater than 40cm in length; simply the weight of demersal fish greater than 40cm in length divided by the total weight of all demersal fish in the sample. The higher the value (varying between 0 and 1), the greater the proportion of large fish in the community. The need to conserve biodiversity has had a strong influence on the development of an ecosystem approach to managing marine natural resources, and this remains a core concern for the EU Marine Strategy Framework Directive and the Marine (Scotland) Act 2010. A range of additional indicators, such as species richness (simply a count of the number of demersal fish species recorded in any survey sample) and species diversity metrics (indices that also take account of the relative abundance of each species in the sample) can also be applied to survey data to act as indicators of change in demersal fish biodiversity.

All three aspects of the composition and structure of the demersal fish community, proportion of large fish, species richness and species diversity, vary markedly across Scottish waters. For example, fish greater than 40cm in length constituted a much greater proportion of the biomass of demersal fish in western waters than in regions to the east of Scotland.

In making any assessment of the state of the fish community, this spatial variation needs to be taken into account, so nine regional assessments (Minches, West of Hebrides, North-western waters, West of Shetland, East of Shetland, Moray Firth, North Sea (north), Firth of Forth, North Sea (south)) were carried out based on the results of two separate analyses. Long-term trends were determined based on comparisons of the average values calculated for each indicator over the first eight (North Sea regions, 1982-1991; western and northern regions, 1986-1995), and last five years (2004-2008) for which data are available for each region. Short-term trends were determined as a regression of the average indicator values calculated over the last ten years (1999-2008) of data for each region. Following the precedent established during development of the OSPAR large fish indicator, the first eight years for which data were available in each region was considered the "reference period". The average indicator value determined for each region during this period was therefore considered to be the baseline value, or minimum aspirational target. The logic underpinning the assessments is described in the table below.

Size composition among demersal fish occupying Scottish waters in the nine regions appeared to give greatest cause for concern; in five regions (West of Hebrides, Moray Firth, North Sea (north), Firth of Forth and North Sea (south)) the large fish indicator suggested a situation where remedial action might be necessary. The situation was generally better for the two biodiversity indicators. Indeed, the species diversity indicator suggested that a cautionary approach was required in just one region (Moray Firth). On the other hand the species richness indicator suggested that some remedial action might be required in two regions (Minches and Moray Firth), and precautionary monitoring required in a third (North Sea (north)). Only in one region, the Moray Firth, did all three indicators suggest the need for either remedial action or precautionary monitoring.

The sand goby is found on coarse sandy and muddy sediments in estuaries, lagoons, sea lochs and salt march pools. It is widely distributed around the coastline of Scotland but with most records on the west coast.

The main pressure on the species is loss or damage of habitat. 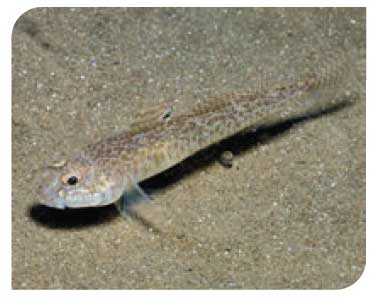