Scotland has a maritime climate that is strongly influenced by the oceanic waters of the North Atlantic and prevailing south-westerly winds. As these winds blow over the regions of the North Atlantic warmed by the North Atlantic Current, they pick up heat which is delivered to Scotland, giving Scotland a relatively mild, wet climate considering its latitude. As such, changes in the strength of the Atlantic Ocean circulation have a significant effect on the variability in the climate of Scotland.

Normally, in the atmosphere over the North Atlantic, a low pressure area is situated in the north, near Iceland, and a high pressure area is situated in the south of the region near the Azores. This pattern of sea-level pressure results in a stream of smaller, secondary depressions, travelling in a north-eastward direction between these two regions. The passage of these depressions accounts for the variable weather experienced in Scotland and although the predominant wind direction is from the south-west, wind direction varies as depressions pass. The depressions are often more intense during winter months bringing gales, which in the windiest places (Western Isles, Orkney and Shetland) can occur up to 30 days each year. Severe winter storms across the British Isles were most prominent in the 1920s, 1980s and 1990s. These severe storms over the UK often related to strong local gradients of pressure as well as to the large scale pressure differences over the Atlantic.

The low lying areas, including the shelf seas, on the west coast of Scotland that are exposed to the Atlantic Ocean tend to have more cloud, less sunshine and be slightly warmer and wetter than the east of Scotland. Mean annual air temperatures in low lying areas are between 7-9°C. However, sea fog (haar) from the North Sea is common in spring and summer, particularly in the Northern Isles and on the east coast. All areas of Scotland have shown an increase in the annual average daily mean temperature between 1961 and 2006, with the increase being slightly greater on the east of the country (1). A relatively uniform increase has been observed in the average daily maximum temperature across Scotland, apart from in the south-east of Scotland where the change is slightly greater than elsewhere. Average temperatures in Scotland and Northern Ireland have risen by approximately 0.8ºC since about 1980.

Rainfall over Scotland is high compared to the UK as a whole. Total rainfall is 113,150 million cubic metres of water per year of which 73% is estimated to runoff into the sea. This equates to approximately 1 million cubic metres runoff per square km of land. Between 1961 and 2006, the average total rainfall in some areas of Scotland increased by between 25 and 50% and average days of rain of = 1 mm decreased by between 12 and 22 days.

The latitude of Scotland causes large variations in length of daylight throughout the year. Some northern areas receive almost 24 hours daylight in midsummer and just a few hours of daylight at midwinter. The duration of light availability is known to produce a varied response in different phytoplankton species. The short, dark winter days, typical of the north of Scotland, mean that phytoplankton growth is considerably reduced between the months of November and February and very low numbers of plankton are observed in the water column. In contrast, some phytoplankton growth is observed in more southerly latitudes of the UK during the winter period. The extended daylength, which is most exaggerated in the northern waters of Scotland, has been shown to affect the biotoxin production of some phytoplankton routinely detected in Scottish waters such as Pseudo-nitzschia seriata. 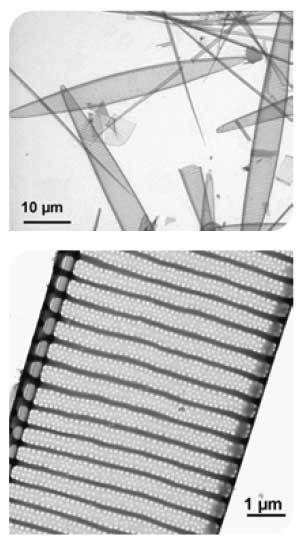 Reproduced by permission of the Met Office