Trends in GVA, turnover and employment

This analysis examines the core marine sector in terms of Gross Value Added ( GVA), turnover and employment from 2000-2008 with figures extracted from the Annual Business Inquiry ( ABI). The industries that form the core marine sector are listed in the table and pie chart. GVA is the value of the output produced minus the cost of all inputs and raw materials used in its production.

The seas have generated a significant amount of economic output and, on this basis, are a valuable asset to the future of the Scottish economy. Overall, the core marine sector, minus the extraction of oil and gas, contributed £3,577M (£3,626M when adjusted to 2009 prices) of GVA in 2008, which amounted to 3.5% of overall Scottish GVA. Extraction of Crude Petroleum and Natural Gas contributed a further £13,334M in 2007. i Around 39,800 ii were employed in the core marine sector in 2008 (1.6% of Scottish employment). Of these, 31% were employed in the Fishing, Fish Farming or Fish Processing sectors.

Source: Data from Annual Business Inquiry ( ABI)(6)
Note: GVA and turnover at 2009 prices. Excludes Extraction of Crude
Petroleum and Natural Gas as data were not available for all the years.

Although displaying data from only one year, GVA by industry sector 2007 offers a representative picture of the relative size of the core sector industries. 2007 data were used here because figures were not available for all sectors for 2008 due to confidentiality issues. The figure shows that the oil and gas sector contributes the majority of core sector GVA and, while individual sectors may exhibit year-on-year fluctuations, these are not sufficiently large to affect the overall core sector composition.

The distribution of core secto­­r GVA among local authorities is influenced by the distribution of the oil and gas sector. Between 2000 and 2008, Aberdeen City and Aberdeenshire combined produced over 60% of the core sector GVAii of all local authority areas and employed around 50% of individuals working in the core marine sector. Glasgow, Highland and Shetland Islands combined contributed an additional 10% of GVA and over 10% of employment. In 2008, five local authorities produced approximately £3,000M of the core sector's £3,600M of GVA with Aberdeen City alone contributing £2,200M.

Source: Data from Annual Business Inquiry ( ABI) (6)
*All prices are for 2009, **Rounded to nearest 100. Due to rounding, totals for all columns may differ from the sum of the individual sectors.

Some areas have been more heavily reliant on core marine activities for overall employment than others. The lower map shows employment in fisheries iv activities as a percentage of total employment by Travel to Work Area ( TTWA) v, which provides a finer regional breakdown than the local authority level. It shows that Fraserburgh, Berwickshire and the Uists and Barra each have more than 10% of total employment coming from the fisheries sectors. While the proportion of the population employed in fishing activities is generally small in most areas, fishing provides an important source of employment for some local communities.

This analysis provides evidence that the seas generate a significant amount of economic output. It does not fully assess the value of economic activity or whether the seas are being used sustainably, nor does it assess the economic value of all activity. Answering these questions would require additional information on the environment or on activities that are currently difficult to quantify using official data. A more detailed assessment will only be possible if more data and information becomes available.

i 2008 data were not separately available for this sector.

ii Not including SIC 11.10: Extraction of Crude Petroleum and Natural Gas.

iii These two sectors had to be combined as data were not available for them individually.

v Travel to Work Areas are defined as areas where, of the resident economically active population, 75% work in that area and of those working in that area, 75% live in that area. Employment is measured based on people's workplace.

Direct employment in fishing, processing and aquaculture activities by travel to work areas (% of total employment, 2007) 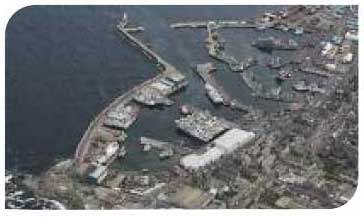