The Ministry of Defence uses Scotland's coasts and seas. The coasts are mainly used for training and locating bases and the seas, while also used for training, are important for test and evaluation activities as well as surveillance and monitoring of potential threats, and for combating these threats.

Most use of the coasts and seas is by the Royal Navy (submarine base, jetties and exercise areas), but coastal locations for both the Army (training camp and firing ranges), Royal Air Force (bases, coastal Air Weapon Ranges and Danger Areas) and Defence Test and Evaluation Ranges (used by the MOD to trial weapon systems) are also important. Detailed information about the intensity of defence use of the seas is not available for reasons of national security. However, the firing ranges, for example, are not in constant use but vary depending on operational requirements.

The major training activity each year is the Joint Maritime Course ( JMC) with navy, army and air force exercises conducted off the Scottish north west coast. These waters, with the Inner Hebrides, form the Navy's Scottish Exercise Areas ( SXAs), part of the overall practice exercise areas ( PEXA) (1). These are marked on navigation charts and cover large areas of sea although actual exercises are restricted to a limited number of weeks per year and cover only a proportion of these areas at any one time. The areas marked on the chart shows the full area of the marine environment available for military training and other defence activities.

Her Majesty's Naval Base Clyde at Faslane is home for UK's four Vanguard class submarines and is the largest single site employer in Scotland with a workforce of 6,500, drawn from the Royal Navy, MoD civilians, Babcock Naval Services and external contractors.

Defence facilities are important sites which contribute to the national and local economy. As this sector produces no measurable output, it is not possible accurately to measure the GVA for marine related defence for Scotland. 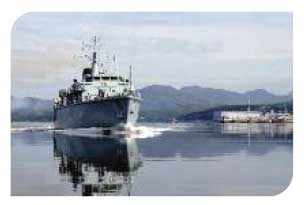 Pressures and impacts on socio-economics

The US navy used the Holy Loch as a base from 1961 to 1992. Following their departure the MoD cleaned up the seabed in the late 1990s and it has since been re-opened for fishing. 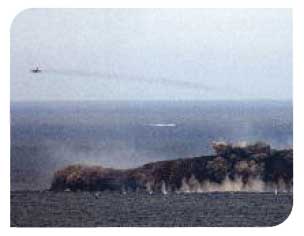 Pressure theme: Pollution and other chemical pressures
Pressure: Release of antifouling substances and other synthetic substances
Impact: Release of chemicals may result in contamination of water and sediments and biological impacts on biota. Potential legacy issues around some munitions dump sites where there was disposal of chemical weapons.

Pressure: Introduction of non-synthetic substances and compounds
Impact: Release of oil and other hazardous substances (from accidental and incidental discharge of cargo or fuel, munitions, discharges from port facilities and shipbuilding/ship repair yards) may result in contamination of water and sediments and ecological impacts on wildlife, mariculture and tourism.

Pressure theme: Other physical pressures
Pressure: Litter
Impact: Introduction of litter (e.g. spent shells and explosives) poses a risk of harm/death to marine wildlife through ingestion of, or entanglement. Little information on this available centrally but local ranges know what has been fired.

Pressure: Noise impacts
Impact: Noise from construction, ship movements, sonar activity and use of live explosives for training purposes. Can cause disturbance of behaviour, damage to hearing, and in the worst-case fatality.

Pressure: Death or injury by collision
Impact: Collisions with vessels, missiles may kill or injure.

Pressure theme: Biological pressures
Pressure: Microbial pathogens
Impact: Release of sewage from vessels introduces pathogens and nutrients into the water, affecting water quality and potentially passing on diseases to humans through contact with contaminated water or consumption of contaminated shellfish.

Pressure: Introduction or spread of non-native species
Impact: Non-native species may be trans-located or spread through the UK in ballast water and as fouling organisms on ships' hulls. These may cause habitat modification and competition with native species.

To reduce the impacts of its activities, the Ministry of Defence has a Policy Statement on Safety, Health, Environmental Protection and Sustainable Development, as well as a Climate Change Strategy. It is required to carry out sustainability appraisals and environmental assessments, as appropriate, for new or revised activities.

It is difficult to assess levels of future defence plans. It is reasonable to assume that training, surveillance and monitoring will continue. The operation of Scottish bases and the use of Scottish seas for military purposes is reserved to the UK government.