Aquaculture produces Scotland's most valuable food export. It involves the farming or culturing of fish, molluscs, crustaceans or algae. The industry in Scotland is dominated by farming of Atlantic salmon but also has significant rainbow trout and mussel production. It is also important because of its capacity to produce food rich in omega-3 oils that help to promote health. Although much of the production is exported, aquaculture also makes an important contribution to food security.

Scotland is one of the three largest producers of farmed Atlantic salmon in the world along with Norway and Chile, and the largest in the EU. 144,000 tonnes were produced in 2009. Rainbow trout (2,620t), brown trout (157t), halibut (69t) and some Arctic charr are also produced. Cod production in 2009 was negligible compared with 2008 when 1,821t was produced. This change was because of the closure of the major production company.

Aquaculture has been the fastest-growing food production sector in the world, with an average worldwide growth rate of 6-8% per year since the millennium. Global aquaculture has increased by a third since 2000, and currently provides around half of the world's seafood for human consumption (3).

Aquaculture is a growing and increasingly important industry, helping to underpin sustainable economic growth in rural and coastal communities in the Highlands & Islands. It has a production value (turnover) worth around £427M per year to the Scottish economy, at farm gate prices in 2009. This was composed of about £412M Atlantic salmon, £6M rainbow and brown trout and £0.5M halibut, with £7M mussels, £1.4M other shellfish. Farmed salmon exports are valued at £285M annually. Exports from fish and aquaculture are Scotland's largest food export.

A survey of the Scottish Salmon Producers' Organisation members indicates that employees stayed an average of eight years against a UK average for length of service of 5.6 years. 13% of staff were migrant workers.

Locations and production figures of finfish and shellfish sites (2005-2009) 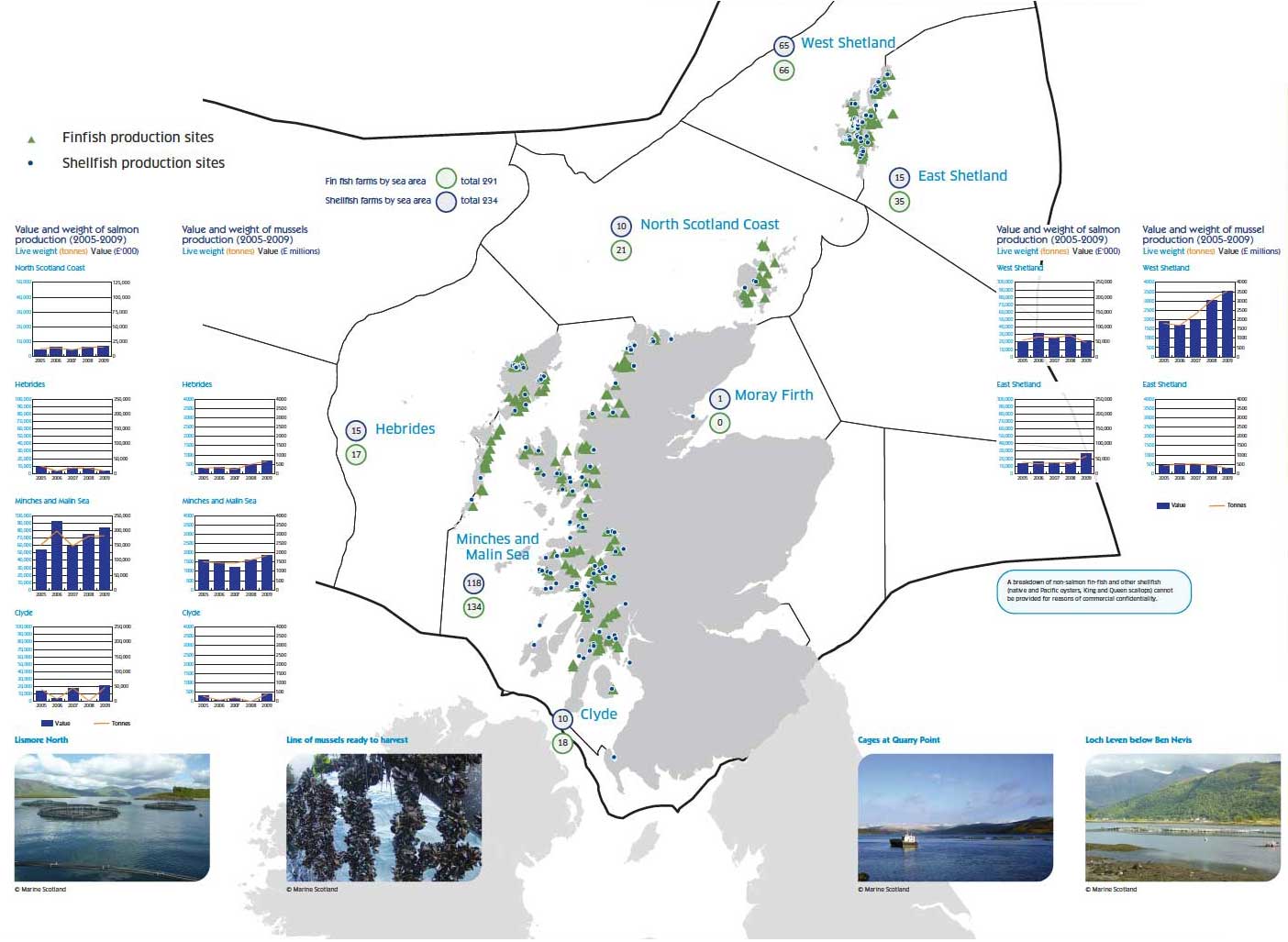 Pressure theme: Pollution and other chemical pressures
Pressure: Synthetic compound contamination
Impact: The dispersion of chemicals (from treatments, spills, food and faecal matter) has the potential to be toxic to benthic species.

Pressure: Non-synthetic compound contamination
Impact: Antifoulant paints and fish feed have resulted in elevated concentrations of copper and zinc in sediments. Discharges of chemicals can be toxic to benthic species.

Pressure: De-oxygenation (in the sediment and water column)
Impact: Breakdown of organic matter, e.g. uneaten food, can create a Chemical and Biochemical Oxygen Demand ( COD and BOD), which can lower oxygen levels and affect local biodiversity.

Pressure: Input of nitrogen and phosphorus
Impact: Excretory products and decaying food release ammonia and salts of nitrate and phosphate. This can contribute to eutrophication and possibly to Harmful Algae Blooms.

Pressure theme: Habitat changes
Pressure: Habitat structure changes
Impact: Some underwater infrastructure can abrade the seabed; harvesting of shellfish (if dredged) can cause damage; use of materials to encourage settlement of oysters can cause damage.

Pressure: Introduction or spread of non-indigenous species and interaction with wild species.
Impact: Escapees interbreeding with wild populations resulting in losses of genetic variability, including loss of naturally selected adaptations.
Some mariculture species can cause habitat modification and trophic competition with indigenous species.
Cages provide potential substrate for non-native species such as caprellid shrimps and colonial sea-squirts (e.g. Didemnum).

Pressure: Reduction in plankton levels
Impact: Overstocking of shellfish could lead to reduction in the standing stock of phytoplankton.

Pressure: Introduction of microbial pathogens (disease)
Impact: Parasites and diseases are part of the natural biology and functioning of ecosystems. Disease can move in both directions between farmed and wild fish.

Pressure: Settlement of cultivated species outside sites
Impact: Shellfish larvae can overspill into the surrounding environment, creating new habitat and biomass for others e.g. waterbirds.

Pressure: Management of other species that impact on aquaculture
Impact: For example, taking or killing of seals to protect salmon stocks and prevent damage of aquaculture cages. 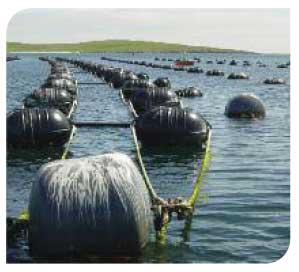 The immediate prospects for Scottish aquaculture are good. The salmon industry is thriving due to the worldwide effect on demand of the collapse in Chilean production and the opening up of new markets. A recent Institute of Aquaculture report (6) suggests that the prospects for mussel farming are good, in some part due to a decline in Dutch mussel production. Scotland is well positioned to contribute to continued growth in the EU, in line with the EU Aquaculture Strategy.

The global demand for seafood, driven by such factors as the need for protein for an expanding population and the need to replace land-based sources suffering from climate change, is likely to increase demand for Scottish production. The salmon industry has identified a significant opportunity for growth in the next five years. In the 2009 European Fisheries Fund awards, grants to the mussel sector were made which could alone lead to a further increase of more than 2,000 tonnes of production.

The stated desire of one company to move to off-shore or exposed salmon farms may remove the main spatial constraint on the industry, and could herald the next stage of aquaculture development. Potential sites could be over twice as large as existing sites and each would therefore represent a significant increase in the value of the Scottish industry.

Given the interest in macro-algae as a basis for biofuel production and other non-food uses over the last five years, and the established Scottish history of macro-algal harvesting, research is underway to assess international progress in this field to inform possible development of this sector.

The proportion of fish meal and fish oil from capture fisheries in farmed fish diets is starting to decline as alternative ingredients are substituted. Most, but not all, of this comes from capture fisheries from stocks primarily from the NE Atlantic and SW Pacific which are considered to be fished at sustainable levels, although there are uncertainties over the sustainability of some. Scottish aquaculture uses about 4% of this global resource.