Elasmobranchs (sharks, skates and rays) differ from other fish in the sea by having a skeletal structure made out of cartilage as opposed to bone.

Elasmobranchs range throughout the oceans and can be found in all oceanic and coastal zones. Scotland has over 30 species of sharks, skates and rays recorded in its waters of which 25 are found in coastal waters.

All elasmobranchs share life history characteristics which make them vulnerable to overfishing and means that once depleted, populations take a long time to recover. Elasmobranchs are slow growing, late to reach maturity and typically have low fecundity, thus the number of individual fish recruited into a population on an annual basis is low. They have a variety of breeding methods:

Some smaller species such as the small spotted catshark (aka lesser spotted dogfish) can mature as early as 6 years old. Larger, longer lived species such as the common skate do not mature until around 15 years old. Low fecundity can mean that each female only produces between 25-50 eggs/pups per year (some females only produce young every two years). The number of young produced is directly proportional to the size of the female, the larger, older fish producing more young than the smaller recently mature fish. The young are often fully developed and instantly capable of self nurture but they are almost instantly at danger from being taken as bycatch as they are large enough to get caught in trawl nets and dredge gear.

As many elasmobranchs tend to school in sex and age related groups, trawls can often pick up large numbers of juvenile fish in a single haul before they have had a chance to reproduce. Therefore relatively few animals actually reach breeding age, and those that do only produce large enough numbers of young later in life to help rebuild a population.

In 2009 it became compulsory for commercial fisheries to report on elasmobranch landings by species as opposed to family. Historically, skates and rays were recorded under one label, now individual species must be recorded. However, many species of skate and ray are similar in appearance and the variation in morphology within the same species can often lead to confusion and misidentification. This will give false numbers of species being landed and could lead to misrepresentation of stock levels.

Many species are also vulnerable to habitat disturbance and loss and some surface dwelling species such as the basking shark are susceptible to boat strikes and harassment.

All species of sharks and rays are on the OSPAR list of Threatened and Declining Species due to their removal as both target and non-target species.

Coastal species of skates, rays and sharks not listed as Priority Marine Features

In addition to the Portuguese dogfish and leafscale gulper shark which are both priority marine features, there are a number of other deep water species of shark that occasionally visit Scottish waters, they mostly occur beyond the continental shelf and are only known due to their occurrence in deep water fisheries.

Little is known about their population numbers or abundance: 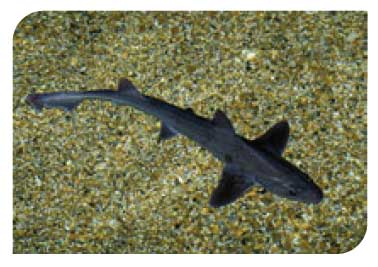