Bathymetry and selected features of the seas around Scotland 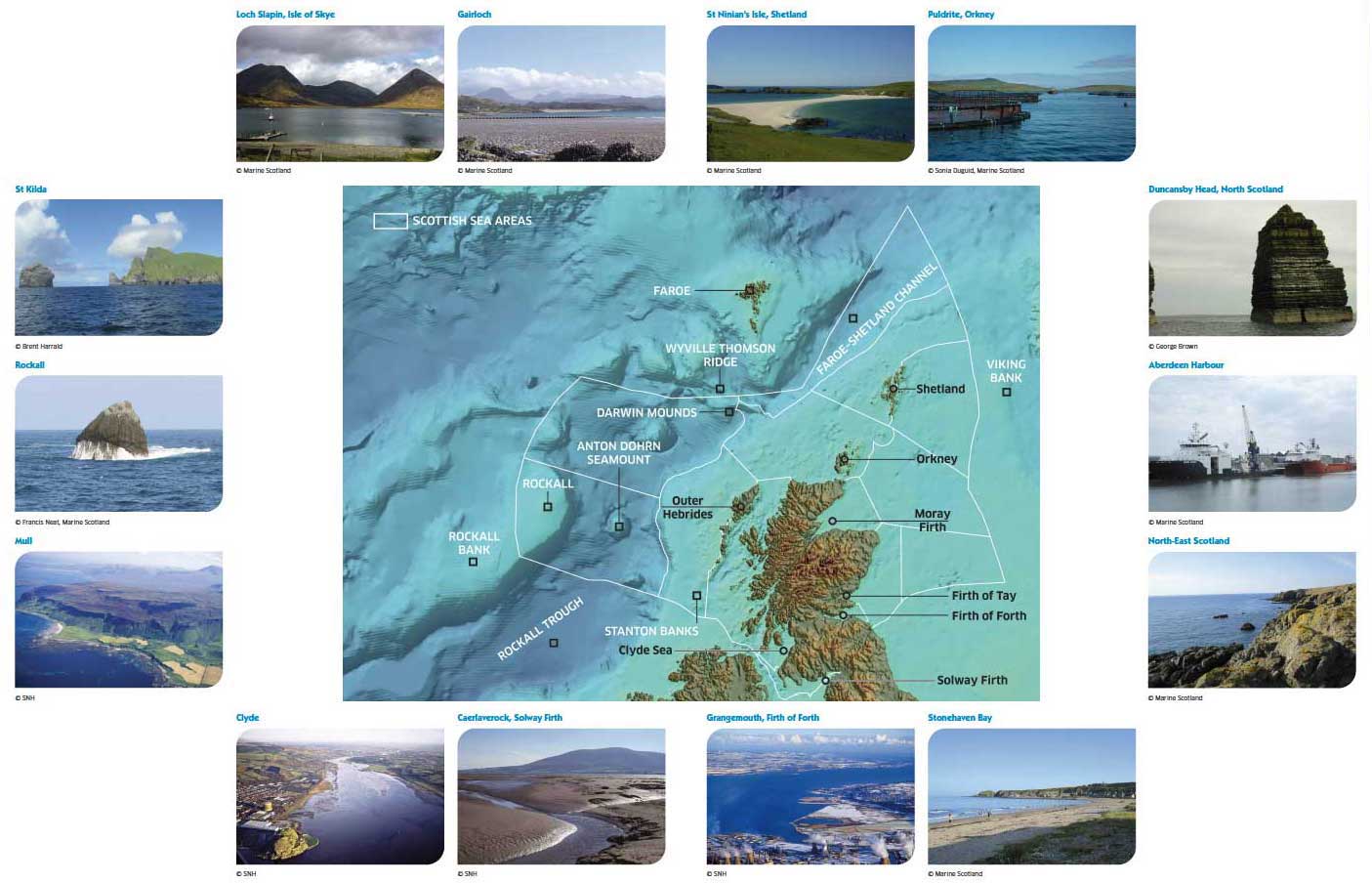 Scotland is a maritime nation with a history that is linked to the seas. Over many centuries, the seas have been a major source of food for the Scottish population, through the consumption of wild fish and shellfish, and they have been important for trade, the movement of people and the early political and governance structure of Scotland.

Industrialisation of Scotland's seas began in earnest with the herring fisheries in the 19th Century. This has gathered pace with increasingly technology-led fishing practices and with the exploitation of offshore oil and gas reserves, mainly in the North Sea, over the last 30-40 years. At the same time, the sheltered sea loch environments, typical of the west coast of Scotland and Shetland, have provided opportunities for the development of aquaculture. This process of industrialisation of Scotland's seas will continue through the development of offshore renewable energy and the exploitation of oil and gas reserves in deeper water towards the edge of the continental shelf. Furthermore, there is likely to be increased tourism and recreational marine activity.

The North Atlantic circulation brings warm surface water past the west of Scotland, improving our climate by warming the prevailing westerly airflow. At the same time, the northward Scottish Coastal Current carries water through the Minches and around the Outer Hebrides and then flows into the northern North Sea, in effect flushing this relatively landlocked sea with new oceanic water. A general southward coastal flow down the east coast completes that pattern of flow around Scotland.

Average water depths vary, but are generally between 50 and 200 m for the shelf seas, the waters being shallower around the south west of Scotland, and typically between 100 and 150 m to the west of the Hebrides and off the north coast. Scotland's offshore environment also includes waters of depths greater than 2,000 m. Little is known about the deep seas around Scotland compared with the shallow shelf seas. In general, less is known about Scotland's seas compared with our knowledge of landward Scotland. What is known however is that Scotland's seas are some of the most diverse on the planet. They are at the confluence of northerly-flowing surface currents and southerly-flowing polar currents and the complex bathymetry to the west causes these to become mixed, bringing nutrients to the surface. These are fed on by plankton communities which form the basis for what could be one of the richest fishing regions anywhere on the globe.

© Francis Neat, Marine Scotland
The above 3-dimensional representation of the Anton Dohrn seamount was generated from data gathered by means of multiple echo soundings, using 3D visualisation. The longitude and latitude are shown giving the location of the seamount.

In the coastal zone, the coastline varies between deep and narrow sheltered sea lochs on the west coast, shallow bays and estuaries, and long stretches of coastline that have little shelter from waves and storms. Major Scottish estuaries are the Solway Firth, the Clyde Sea, the Moray Firth, the Firth of Tay and the Firth of Forth. The North Sea coastline is predominantly rocky but there are intertidal sediments in the bays and inlets and some extensive stretches of sandy beach. Indeed, some of the largest sandy beaches are on the coasts of Aberdeenshire and Moray. Scotland has some extensive gravel beaches with Spey Bay on the Moray coast being one of the most important gravel beaches in the UK. Raised beaches on Scotland's west coast are also the remnants of an ancient past that illustrate the dynamic nature of the coastline. Spits are one of Scotland's most dynamic coastal landforms. Two examples of this are on the Moray coast at Culbin and Whiteness Head which is currently growing at a rate of 30 m per year. The west coast of Scotland is also typically rocky but has many bays, channels and sea lochs where there can be restricted water exchange with the surrounding seas and high levels of freshwater input from rivers, particularly for the sea lochs with a sill at the mouth of the loch. The coastline of the Western Isles, the north of Scotland and the Northern Isles is also rocky but the extreme length of Scotland's coastline, estimated at 18,840 km, is largely because of the large number of these diverse island coastlines that can transition quickly between rocky shore, sand, gravel and silt because of extreme variability in exposure. The machair landscapes and coastlines of the western Hebrides, which are created from ancient shell sand deposits, are an ecotype that is largely unique to Scotland.

Selected features of the seas around Scotland (see fold-out map) 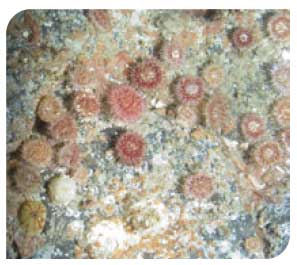 The offshore environment in Scottish waters ranges from shelf sea areas to deep ocean regions with depths greater than 2,000 m. The continental shelf includes the Malin and Hebrides Shelf Seas, Orkney and Shetland Shelf Seas, and the North Sea. The shelf seas are marked by notable features such as banks (e.g. Stanton Banks, Viking Bank) and deep channels.

The western margin of the continental shelf is marked by a sharp change in depth of seabed at about 200 m. The continental slope is a transition area between two systems- the deeper oceanic waters and the shelf sea waters. The deep oceans have a complex bathymetry that is broken up by steep ridges (e.g. Wyville Thomson Ridge), seamounts (e.g. Anton Dohrn) and banks (e.g. Rockall Bank). The main offshore habitats for the North Sea are large expanses of sand and mud. On the west coast, however, the main offshore habitats are coarse sands, gravel and rock. To the west of the Outer Hebrides and to the north of Scotland the main offshore habitats are expanses of mud, sand and coarse sediment. In the deeper waters to the west and north of Scotland, the main habitats are large expanses of mud and fine clay, but a variety of coarse sediments are found in shallow waters, on banks and seamounts. 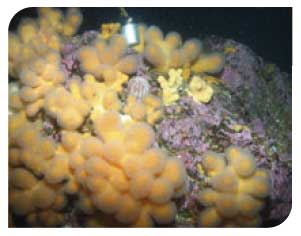