Most of the fish stocks of interest to the Scottish sea fisheries industry span international boundaries and are often caught in mixed fisheries. This can lead to complicated interactions between regulations applied by different countries to individual species.

For stocks which occur exclusively in the waters of European Union ( EU) Member States, the amount of fish caught is regulated by the EU through the Common Fisheries Policy ( CFP). For stocks that move between EU and third country waters, the Commission negotiates fishing opportunities with the relevant country or countries. The key third country agreements for Scotland are with Norway (for the North Sea) and Iceland and the Faroes (for pelagic stocks).

In international waters to the west of Scotland, beyond British Fisheries Limits, management of stocks is agreed through the North East Atlantic Fisheries Commission ( NEAFC). Between EU Member States Total Allowable Catches ( TACs) are allocated according to historic fishing patterns. For joint stocks shared between EU and non- EU countries, allocations are shared between the signatories to the agreement according to the principles laid down by the United Nations Convention on the Law of the Sea ( UNCLOS).

Decisions are based on scientific advice from the International Council for the Exploration of the Sea ( ICES).

Fishing activity changes to reflect scientific advice, the location of fish and the need for possible closure of areas. Up-to-date information on temporary closures can be found on the Scottish Government website (1).

All landings are reported according to the regions in which fish were caught (known as ICES squares). This catch information, together with independent fish surveys, form the basis of the data used to assess the amount of fish that can be caught each year. Larger fishing vessels (15m and over) are fitted with a Vessel Monitoring System ( VMS), which allows for more detailed information about the location of fishing activity. Smaller vessels are currently not covered by VMS. Landings data from Scottish vessels are published annually in the Scottish Sea Fisheries Statistics (2).

The Scottish fishing fleet can be split into four broad sectors:

The largest part of the commercial fishing industry operates from ports located in the north-east of Scotland, especially around Peterhead and Fraserburgh. This region has both the greatest volume and value of landings, as well as a greater concentration of local fish processors and an important level of local economic dependence on fishing activity (see Economic Analysis Section). Shetland has a fishing sector on a similar scale to that of the north-east and provides important landing facilities for many of Europe's pelagic fleets. The north coast and Orkney support a small local industry and also have some busy fishing ports, notably Scrabster and Wick.

In the north-west, Lochinver and Kinlochbervie are important ports for access to the fishing ground to the north-west of Scotland and often receive landings from fishing vessels from other EU countries that operate to the west of Scotland. The western coast still supports numerous small ports and harbours, the largest of which are Ullapool, Oban, Portree and Mallaig. Elsewhere, in the south-east and south-west, numerous small ports continue to support a small local industry based on small vessels fishing inshore grounds, mostly for shellfish. Most of the fishing industry on the west coast is now dependent upon shellfish.

Fishing effort has decr­eased significantly since 2000 due to continuing restrictions on fishing activity in order to promote stock recovery.

To obtain a fishing licence for the first time, an entitlement has to be secured from a current licence holder. An entitlement becomes available when a licence is no longer attached to an active fishing vessel or it may be transferred alongside the purchase of a fishing vessel. 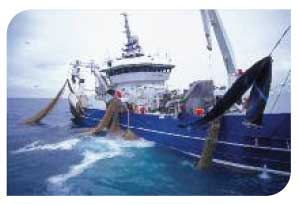 Number of fishermen employed on Scottish based vessels

Effort of selected regulated gears (in KwDays) in West of Scotland, Scottish vessels over 10m

Source: Marine Scotland
Note: no kw Days effort data for non- UK vessels. Rectangles where no effort by UK vessels was recorded are not coloured.

Source: Marine Scotland (3)
Note: excludes landings data for non- UK vessels landing outside the UK. Rectangles where no catch was recorded are not coloured

Source: Marine Scotland
Based on VMS positions received every two hours from EU vessels and every hour from third country vessels.

Pressure theme: Other physical pressures
Pressure: Introduction of litter, remnants of damaged nets
Impact: Ghost fishing and entanglement of marine animals. Mainly an issue with a static net fishery, rather than trawl fishery pursued by most Scottish vessels.

Pressure theme: Habitat changes
Pressure: Abrasion due to disturbance from fishing gear
Impact: Damage to, or loss of, habitats.

The fisheries sector is currently, and is likely to remain, important to many rural areas in Scotland. Fisheries management will continue to focus on bringing down rates of exploitation to Maximum Sustainable Yield ( MSY) targets. There is increasing downward pressure on the levels of exploitation. Past over-exploitation of some stocks means that current stocks are depleted and require time to become re-established. It is likely that pressure to reduce discarding will increase, though without allowing overall catch to rise. Management measures will need to reduce bycatch and discards, and be more responsive to changing patterns of fish migration and movement.

Currently, Scottish Ministers will not licens­e any expansion in Scotland's existing fishing capacity. So no new fishing licences (which are needed to fish commercially for sea fish and land a catch for profit; and also stipulate authorised seas area, species and gear) are issued.

Reform of the CFP in 2012 may result in significant changes to the aims and objectives of the policy with a consequent effect on management. The outcome of this reform process cannot be predicted with any certainty but one possibility is that EU fisheries may be managed on a regional basis and fishermen may be more directly involved in the management of the fish stocks.