Imposex is the development of male sexual characteristics (the formation of a vas deferens and growth of a penis) in female dog whelks. The common dog whelk, Nucella lapillus, is a marine snail. It is abundant on many rocky shores, where it feeds on barnacles.

Imposex is caused by exposure to Tri-Butyl Tin ( TBT). TBT entered the marine environment through its use as the active biocide in anti-fouling paints applied to boats' and ships' hulls from the 1970s. The TBT was released by leaching from the ships' hulls and in ports and harbours when old coatings were replaced with fresh paint.

TBT was initially banned for use on boats less than 25m in length in 1988, on all international shipping in 2003, and completely on all boats and ships in 2008.

Since the late 1980s, populations of dog whelks have been sampled, on an 'ad hoc' basis, at over 100 sites around the Scottish coast. In 2002 several sites were Class D but no sites were Class E or F. By 2008 the number of Class D sites had decreased and the number of Class A sites had increased. The overall picture is one of a decrease in the levels of imposex, showing that the ban on TBT has been effective. By the late 2000s, the levels of imposex at many sites had decreased to background so the monitoring programme was reduced. A few local 'hotspots' near point sources of TBT, which yielded high VDSI scores in the late 1980s and 1990s are still evident, but even in these hotspots the severity of imposex has decreased. 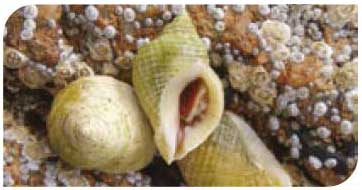 EROD [7-Ethoxyresorufin-O-deethylase] is an enzyme found in fish liver which is important in the metabolism of contaminants such as certain polycyclic aromatic hydrocarbons ( PAHs) and other structurally similar compounds.

Why do we measure EROD?

The expression and activity of EROD increases in fish exposed to these contaminants through the food they eat, contact with contaminated sediments or via the water column. Although the health effects of high levels of EROD are unknown, the mechanism of enzyme induction produces highly reactive intermediates of certain contaminants which may cause the onset of carcinogenesis, cell death and embryonic mortality.

EROD in plaice and flounder has been measured annually since 2001 at potentially contaminated and uncontaminated (background) sites throughout Scotland.

Due to the relatively small dataset available for flounder EROD activity and the fact that flounder and plaice respond similarly, the response ranges developed for plaice were applied for assessment of EROD data for both species. 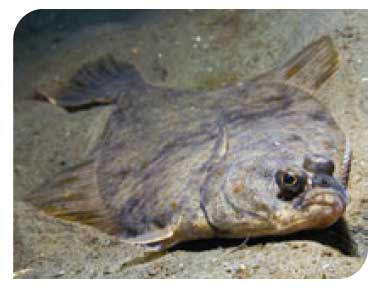 EROD activity in plaice and flounder in 2007

The results show that EROD activity in flounder and plaice caught in the Clyde and Forth has decreased and is now in the close to background or background response range at all sites. This is particularly apparent at one of the most affected sites in the Clyde, Garroch Head where sewage sludge disposal ceased in 1998 and the evidence from EROD data suggests that exposure of plaice in this area to planar organic contaminants has been decreasing consistently since 2001.

There is a clear indication that the EROD response measured at Garroch Head and Holy Loch may be related to a decrease in contaminant availability at these sites. It would be of value to relate these responses to sediment contaminant data over the same sampling period. Furthermore the EROD responses reported here could be used in an integrated assessment framework with chemical contaminant concentration in sediment and biota and with other higher biological effect responses.

What are environmental genomics?

Biochemical response of exposure to contaminants

When animals are exposed to harmful chemicals they respond by producing enzymes that can eliminate the chemical threat. The chemicals bind to a cellular protein known as a receptor. The receptor activates gene sequences that promote the synthesis of the protective enzymes to produce a messenger molecule, messenger RNA ( mRNA). The messenger RNA is subsequently translated into the protein sequence of the enzyme.

How can we measure this response?

The quantities of mRNAs are very low and chemically they cannot be distinguished one from another. Polymerase Chain Reaction or PCR is used to amplify the signal of specific mRNAs. This method has been described as "molecular photocopying" because it can start with complex mixtures of DNA and quickly produce millions of copies of a single component of that mixture. Monitoring the "molecular photocopying" process in real time allows quantification of the amount of DNA in the starting material. This adaptation is known as Quantitative, Real-time PCR or qPCR for short.

The levels of mRNAs (messenger RNAs) produced by several genes associated with adaptive stress responses to different contaminants were measured. The genes measured included metallothionein, which respond when exposed to metals in the environment, and others such as catalase and glutathione S-transferase, which respond to exposure to trace organics compounds.

Mussels were collected from three sites in the Clyde Sea Area in January 2009, as shown on the map. Tissue from half of the animals was used for chemical determination of metals and organic compounds (polycyclic aromatic hydrocarbons and polychlorinated biphenyls). Tissues from the other half were used to isolate mRNA which was converted by an enzymic method to DNA which in turn was used for qPCR. The levels of 8 different mRNAs or transcripts were measured either in all tissues or in selected tissues.

Comparison of qPCR results of mRNA for each gene relative to Colintraive, showing levels of significance

What do the results mean?

The most obvious finding from this study was that a number of genes in all three tissues were affected at Woodhall, whereas fewer genes and fewer tissues differ at Garnock relative to Colintraive. The higher levels of gene transcripts in metallothioneins at Woodhall suggest effects due to heavy metals, and since both MT10 and MT20 were affected this indicated exposure effects attributable to essential metals and heavy metals. This is consistent with the observation that mussel body burdens of zinc, chromium and lead at Woodhall were more than twice as high as in animals at Colintraive.

In contrast, the mussels collected from the Garnock Estuary showed no significant differences in MT10 or MT20 in any of the tissues compared to Colintraive, and body burdens of metals were also similar to those at Colintraive.

Elevated levels of catalase at Woodhall and HSP at Woodhall and Garnock may be indicative of oxidative stress resulting from exposure to heavy metals and/or to organic contaminants. Body burdens of several polycyclic aromatic hydrocarbons (chrysene and indeno (1, 2, 3-cd) pyrene) were more than 15 times higher at Woodhall compared to Colintraive. The gene transcript Trp was altered in the digestive gland at both Woodhall and Garnock. Elevated Trp may be associated with the presence of pathogens and mussels exposed to chemicals may be more susceptible to infections.

What do the findings of the study tell us?

The study showed that the new analytical technique was able to measure changes in stress-response genes that reflected the exposure of mussel populations to contaminants. The chronic effects of contaminants may have implications for the health of mussel populations due to stress on the animals, since physiological energy is required to protect themselves from the environmental pollutants.