Coastal erosion and flooding pose a threat to people and their property at the coast. For generations, society has built defences to prevent erosion and protect land from flooding. Examples of these include groynes, sea walls and embankments (termed hard engineering).

Present day approaches also include soft engineering such as replenishing eroding beaches with sand, referred to as beach nourishment. Also, nature is occasionally allowed to take its course through managed retreat or coastal realignment, where existing hard defences are intentionally or naturally allowed to breach so recreating natural saltmarsh. This provides a place for high tides to spread out and would be most effective in firths.

There is no central record of all historic coastal management schemes, although aerial survey would indicate where the coast had most likely been altered. SNH estimate that 429km of mainland Scotland's coast is artificial, 307km of this is coastal defences, the rest being other developments such as piers and harbours (1).

Light Detection and Ranging ( LIDAR) can produce a high-resolution map of terrain, from which it is possible to identify man-made structures. LIDAR also allows for the monitoring of changes in coastal structures.

Source: SNH(2)
Note: shading shows changes in altitude; lighter colours are lower, darker colours are higher ground. The gradual narrowing and lowering of the dune reach towards Cille Pheadair is clear in the LIDAR image, as is the extensive low-lying area inland of the dune ridge, which is the bed of a drained loch. 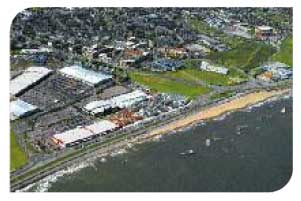 The key contribution of coastal protection and flood defence schemes is through the protection of assets and infrastructure. They do not contribute directly to economic output, providing no measurable GVA and the number of jobs associated with this sector is difficult to measure accurately. The expenditure on these projects, where known, is shown in the tables, total £56M, with the main benefits being to protect property and reduce damage to economically important land. Costs to society are avoided through the existence of the schemes.

Pressure: Hydrographic change from the presence of the structures
Impact: Change in sedimentation pattern may lead to erosion/sedimentation processes in adjacent areas. Defences may also lead to accelerated erosion in front of the defences (6).

Pressure theme: Other physical pressures
Pressure: Introduction of noise
Impact: Noise related to construction activities, including sediment addition for soft schemes, can cause disturbance and changes to behaviour of certain species e.g. to foraging birds; movement of material may cause disturbance to fish (7).

Pressure: Physical presence of structure
Impact: Hard coastal defencesFragment and replace sedimentary habitats, leading to habitat changes and species level pressures. Diversity and abunda­­­­nce of species has been found to decrease on artificial structures (8)(9). Structures can be a barrier to species movement.

In 2003, an inner sea wall was restored at Nigg to withstand a 1 in 50 year tidal event. This allowed the outer sea wall to be breached letting high tides onto land that was previously improved grassland. This created 25ha of intertidal habitat: a combination of mudflat, and low, mid and upper saltmarsh, and some dry grassland.

The environmental benefits can be stated in qualitative terms but it is difficult to attribute a financial value to them. The scheme cost £53,840. The RSPB have been monitoring the area to assess its impact on species assemblages, vegetation and sedimentation. 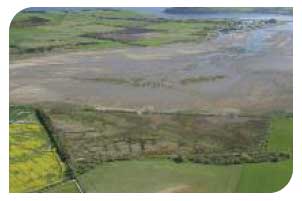 With the rise in global sea-levels and a predicted increased risk of storm surges, Scotland's coastal infrastructure and habitats may be placed under increasing threat (12)(13). Rising sea levels and changes to wave conditions may alter erosion rates, increase the incidence and severity of flooding events, and affect intertidal profiles (12). This may well increase demand for coastal defences.

Long-term tide gauge measurements (see Chapter 2) at Aberdeen show a rising trend over the last 100 years of around 0.7 mm/year, whereas a tide gauge in Lerwick, Shetland Islands, has recorded a fall in relative sea level since 1957 (13). Global sea-level rise is offset in some areas by the isostatic rise in the Scottish landmass, which has continued since the melting of the ice sheets at the end of the last ice age (14).

There is potential resource for beach nourishment material from the seabed although this would be subject to obtaining consent. Beneficial re-use of maintenance dredging spoil is an alternative source.

Some local authorities have developed Shoreline Management Plans to guide the management of their coasts. The Flood Risk Management (Scotland) Act 2009, which repeals the Flood Prevention (Scotland) Act 1961, establishes a framework within which sustainable flood risk management of coastal flooding will operate more effectively.