Scotland holds internationally important numbers of 24 species of breeding seabirds that are an important indicator for assessing the state of the marine environment. Seabirds respond to a range of factors, such as changes in food availability, weather, predation and pollution. Their abundance (i.e. number of breeding birds) is determined by how many adults survive from the previous year and how many young birds successfully reach maturity. The productivity (i.e. number of chicks produced) can provide a good indication of food availability as well as levels of predation. Productivity typically changes more quickly than abundance.

Breeding abundance and productivity is assessed for a number of the species that breed in Scotland based on a representative sample of colonies around Scotland, which are monitored as part of the UK Seabird Monitoring Programme. Seabird abundance has been declining since the early 1990s, the lowest abundance (70% of 1986 level) was reached in 2004 and has subsequently increased slightly and has been stable at around 72% for the last three years. The abundance declines were driven by those of black-legged kittiwake, Arctic skua, Arctic tern, herring gull, European shag, great black-backed gull and Sandwich tern and latterly by those of northern fulmar and common guillemot. Seabird productivity has fluctuated over the period but has declined to a low of 57% in 2007, since when there has been a very slight increase. 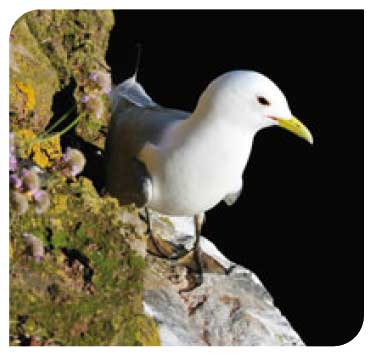 Breeding seabird numbers in the United Kingdom. Most figures are from the Seabird 2000 survey (1998-2002) but those for Northern gannet and roseate tern include more recent updates. All counts are of pairs unless otherwise stated.
1 Northern gannet figures are from the complete UK and Ireland survey of colonies in 2003-2005.
2 For species which also breed in inland colonies (defined as those >5km from the sea) the coastal component is shown separately.
3 Roseate tern figures are from 2006.
4 Counts are of individuals.
5 Counts of pre-breeding adults.

Note: Colonies ranked on total number of individual breeding seabirds at last census in 1998-2002. A selection of the most notable species is given. Some colonies have been re-counted since last census, but these are not shown. All figures are pairs, except for razorbill, common guillemot and black guillemot, for which individuals are given.

Black guillemots (known as tystie in Shetland) are widely distributed around the Scottish coast, but with the main concentrations in the Northern Isles and west coast. The Scottish population of ~38,000 represents about 87% of the Britain and Ireland population and of these over 50% breed in Shetland and Orkney.

Black guillemots are very vulnerable to oil spills and predation at their nests by otters and American mink. Some local declines have been linked to mink predation. 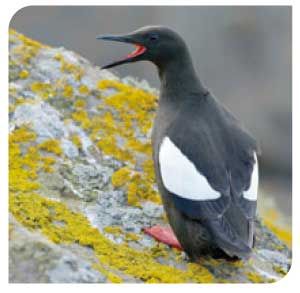 The key factors affecting the abundance and productivity of seabirds are food availability, weather conditions and the occurrence of predators. Many seabirds, particularly those that have undergone the largest declines, mostly feed on small shoaling fish such as sandeels. In the past commercial sandeel fishing has had a detrimental impact on black-legged kittiwake survival and productivity. There is little sandeel fishing off Scotland currently due to fishery closure and stock collapse. Sandeel abundance appeared to be high again in 2009 and this is reflected in improved productivity in a number of species. Changes lower down the food chain caused by warming sea water temperatures are also thought to have contributed to the reduction in sandeel abundance, size and energy content, especially in the North Sea. Fisheries have also contributed to earlier increases in some seabirds that scavenge offal and discards, such as the northern fulmar and great skua. Great skuas have continued to increase in numbers but northern fulmars have declined in recent years. Predation by non-native mammals has caused reductions in productivity and abundance of ground and burrow nesting seabirds. Successful eradication of these predators at a local scale has started to have benefits for seabirds in recent years.

The traditional guga hunt on Sula Sgeir to the north of Lewis in the Outer Hebrides is licensed to take up to 2000 young northern gannet chicks that are eaten as a local delicacy. 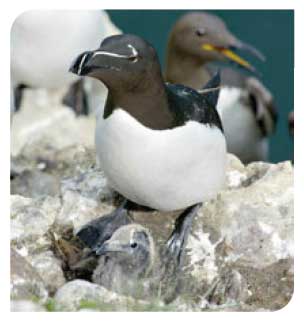