The first ' Marine Atlas' presents data spatially to assist with the introduction of marine planning. It does so based around the elements of the government's vision for the sea: clean and safe, healthy and biologically diverse and productive. The Atlas presents the assessment of condition and summary of significant pressures and the impacts of human activity required for the national marine plan. It also represents a contribution to the initial assessment required for the Marine Strategy Framework Directive ( MSFD) (1) by July 2012.

Area covered and scale of data

The Marine (Scotland) Act 2010 (2) and the Marine and Coastal Access Act 2009 (3) provide for marine planning of Scottish waters out to 200 nautical miles and give new marine conservation responsibilities. So this Atlas presents data over this whole area, including for policy areas which are reserved to Westminster, to ensure that policies developed in the national marine plan are informed by the fullest data possible. The Atlas refers to a variety of boundaries and spatial scales:

Data can be aggregated to different scales for different purposes, so its presentation has to consider the purpose. This Atlas presents data at the most relevant scale available to illustrate the main issues for national marine planning.

There is provision for future marine plans to be developed for Scottish marine regions. These regions have yet to be decided. However, the 15 sea areas used in this Atlas, based on areas previously adopted for certain environmental monitoring programmes, are likely to be of a similar scale as marine regions.

The data from these 15 areas can be presented regionally and also reasonably aggregated to form a national picture and to develop information for the two main areas required for the MSFD initial assessment: the Greater North Sea (Area II) and the Celtic Seas (Area III) which are existing sea areas used by OSPAR (the Oslo Paris Convention for the Protection of the North East Atlantic) (4).

How this Atlas has been compiled

The Atlas has taken Scotland's Seas: Towards Understanding their State, published in 2008 (5), and developed its contents to provide a spatial assessment where possible. Much effort has been taken to map data sets and present graphs around them. It is recognised that there are some areas where this is not yet possible so the provision of spatial data suitable for marine planning will be an evolutionary process. A data annex available online, lists the various data sources used for this Atlas.

The preparation of the Atlas has been a collaborative effort. Marine Scotland led the work on chapters 2, 5 and 6, with SEPA in the lead for chapter 3 and SNH, with assistance from JNCC, leading chapter 4. Each contributor also developed the appropriate part of the overall assessment. A valuable contribution was also provided by the Marine Alliance for Science and Technology Scotland ( MASTS) (6) to all work. The Agri-Food & Biosciences Institute; Centre for Environment, Fisheries & Aquaculture Science; Countryside Council for Wales; Department for Environment, Food and Rural Affairs; Environment Agency; National Oceanography Centre; Natural England and Northern Ireland Environment Agency all reviewed Atlas material.

A variety of data sources have been used. The key data sets are from the range of established monitoring programmes undertaken by the various contributing organisations for their main responsibilities, for example, to meet legal obligations. For much of the productive seas data, existing data from regularly published government statistics have been used. Most data have required somere-working to be presented at the level of the sea areas used.

Data used for Charting Progress 2 ( CP2) (7), published in July 2010, have also been heavily relied on here. CP2 was the second assessment of the UK seas and involved the same contributing Scottish scientists as this Atlas. This Atlas draws on the four CP2 Feeder Reports adding more detail where necessary and appropriate to map Scottish seas.

To make the Atlas easily accessible andto focus on portraying information spatially, the material has been restricted to summaries and short text, complimented by images and graphs. For many topics, further information is available from a variety of sources and these are referenced. Full references are available in an online annex.

This is presented based around the elements of the vision for the seas. A red/orange/green traffic light approach has been used for the range of parameters assessed for 'clean and safe' and 'healthy and biologically diverse' seas. For 'productive' seas the amount of each activity per sea area is based on either value (where known) or amount of activity.

Executively devolved - Scottish Government administers the activity but the Scottish Parliament has no powers to change the legislation.(*) Offshore is to the median line, 200 miles or further, where applicable 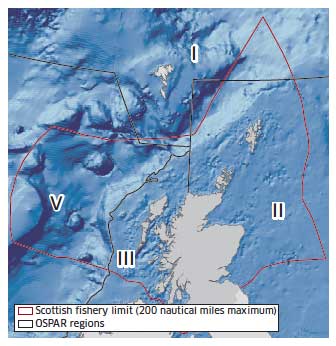 Descriptors for determining GES under MSFD

The concept of ecosystem goods and services is based around the cycle of events that link human societies and their wellbeing with the environment. The concept is an attempt to make apparent the value and importance of functioning ecosystems in providing essential support for human society.

The extent of the benefits received from ecosystems and the possible consequences of damaging them are slowly being understood, having been examined as part of the Millennium Ecosystem Assessment(8).

Marine habitats and their diversity of organisms provide a range of ecosystem services and benefits of significant value to Scotland. The goods and benefits accrue both directly and indirectly to much of society. Well established benefits include:

regulation (R) - for example, the reduction of climate stress (through carbon and other greenhouse gas regulation by the seas); flood and coastal protection; pollution regulation (through waste removal, breakdown and detoxification); disease and pest control; and

At the time of writing, a UKNational Ecosystem Assessment ( NEA) is being prepared (9) which will go some way to valuing ecosystem services including those provided by the marine environment. The link between ecosystem services, the goods they provide and the value to people is illustrated in the schematic diagram.

This Atlas provides an economic valuation of a range of productive uses of the sea and the value of some goods, for example, fish caught or farmed. It does not provide an analysis and valuation of ecosystem services.