Oil and chemical spills are reported from vessels and offshore oil and gas installations operating in UK waters in the UK Pollution Control Zone ( UKPCZ).

It is important to monitor oil and chemical spills as these may result in contamination of the seas and these spills may result in harm to birds or other marine animals.

The Maritime and Coastguard Agency ( MCA) exercises the UK Government's statutory responsibilities for taking action when oil or any other hazardous or noxious substance emanating from any at-sea activity threatens the UK or its surrounding waters.

The MCA established the Advisory Committee on Protection of the Sea ( ACOPS) in 1952, and each year the MCA publishes via ACOPS the results of an annual survey of reported spills. The survey results complement historical data and records, and enables the MCA's Counter Pollution and Response ( CPR) Team to monitor the number of incidents, the amount of oil and chemicals spilt the geographical distribution of spills, the sources of pollution and the nature of the pollution. The ACOPS annual reports (2) include all of this information, and these can be accessed at www.acops.org.uk. (2)

In general, since most oil spills in coastal waters are due to accidents in handling oil or due to vessels running aground, the frequency of the occurrence of these spills correlate to vessel activity and are spread around the coast.

In contrast, most offshore spills occur at oil and gas installations, which are located mainly in the East Shetland, Fladen and Forties sea areas, hence most spillages in offshore waters are reported in these areas, with very few elsewhere.

Oil and chemical spills reported in 2008

Reported spills for UK waters for 2008 included 1,530 incidents and 605 separate discharges from vessels and offshore oil and gas installations, an overall reduction of 8% compared to the total number of incidents reported in 2007.

Trends in numbers of reported spills between 2002 and 2008 are shown in the line graph, using data from ACOPS annual reports. Spills from vessels appear to be decreasing, while those from oil and gas installations show no clear trend. As a result, total spills show no clear pattern.

What were the most serious coastal spills, and what action was taken?

There were 50 vessel-related oil pollution incidents in Scottish coastal waters in 2008, compared to 54 in 2007. None of these was serious, with only 3 spillages of more than 220 litres. One of these took place in Ardrossan harbour due to a 500-litre fuel oil spillage, which was boomed off and contained by the Clydeport Counter Pollution Team. At St Kilda a deep sea fishing vessel ran aground, and about 8 tonnes of diesel oil escaped to sea, where it was quickly broken up and dispersed by wave action. A fishing vessel went aground and later sank alongside Leverburgh pier, causing a 300-litre diesel spillage. The Western Isles Council Pollution Team carried out a clean-up operation using an absorbent boom to contain the pollution, but some oil reached the shore. 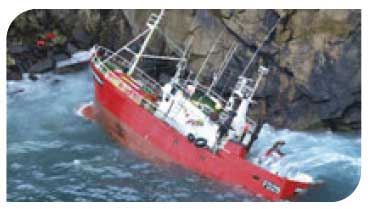 Where were the most serious offshore spills and what action was taken?

The data for the offshore spills is provided by ACOPS on a UK basis, so it is difficult to assess the impacts for Scottish offshore waters. In 2008, there was a total of 272 accidental oil discharges attributed to offshore oil and gas installations, and 163 accidental discharges of chemical substances.

Of the oil discharges, 30% were identified as fuel oils, 29% as crude oils and 26% as lubrication or hydraulic oils, and of the total, 94% were less than 455 litres in volume.

Aberdeenshire and Moray Councils reported intermittent beach pollution following two spillages of crude oil from the Beatrice Alpha installation. A remote-sensing aircraft from the MCA detected crude oil residues on the foreshore but not in the open sea. All accessible shore areas were cleaned up successfully over 20 days with the assistance of staff from the company responsible.

The estimated mass of accidental chemical discharges in Scottish waters ranged from about 1g up to 57,347kg, although few were 1 tonne or more, and many of the larger discharges occurred over extended periods of time.

The largest chemical spill involved the leakage of 57,347kg from August to October at the Petrojarl Banff installation in the Forties sea area, due to a fault in a subsea control system. Following diagnostic testing and subsea remotely-controlled vehicle inspections, repairs were carried out by a diving vessel support vessel, which stopped the leak.

What is the future outlook in this area?

Future trends in the numbers of oil and chemical spills reported are difficult to predict, as these are related to levels of industrial activity and arise mainly from accidents, either as oil spills in fuelling activities or as a result of vessels running aground, or as chemical discharges from oil and gas installations. However, if the level of shipping or oil and gas production or other offshore activities such as offshore wind power generation increases, the potential for the numbers of accidents to increase would also increase. Reductions in the numbers of oil and chemical spills rely on the application of best practice by companies, and by staff taking more care in operational activities.

Around Scotland, the Marine Accident Investigation Branch ( MAIB), of the Department for Transport, examines and investigates all types of marine accidents to, or on board, UK ships and on other ships within territorial waters. It does so with powers under The Merchant Shipping (Accident Reporting and Investigation) Regulations 2005. The data collated by MAIB gives a full picture of the number of incidents (including vessel losses and fatalities) within territorial waters but limited to UK vessels beyond that.

The MAIB investigates all incidents reported to it, often making recommendations with a view to improving safety at sea. It publishes an Annual Report which may also make further recommendations and lists details of all incidents. There is no trend apparent in the data for the period 2005 to 2009. Some vessel losses can be correlated with data in the oil spills section. For example, the fishing vessel Spinningdale was wrecked on St Kilda in 2008 but was later removed completely.