Eutrophication occurs when the enrichment of waters by nutrients (nitrogen and phosphorus) increases the growth of algae and plants in the water to the extent that they smother and suffocate wildlife.

Nutrient enrichment of watercourses results from agricultural run off and sewage. Algae and plants take up dissolved nutrients and require approximately sixteen times more nitrogen than phosphorus. Compared to seawater, rivers are rich in nutrients, particularly nitrogen, so algae and plant growth in rivers are usually limited by phosphorus. Algal growth in seawater is usually limited by available nitrogen. The limiting nutrient in estuaries changes as river water is diluted with seawater so that phosphorus may be limiting growth at the head of an estuary and nitrogen at the mouth.

Nutrient inputs to the sea from rivers, sewage and industrial discharges have been monitored since 1990 for the OSPAR riverine inputs and direct discharges programme. Inputs of total nitrogen (both dissolved and particulate) have remained at 70,000 tonnes per year whereas inputs of total phosphorus have reduced from 8,000 to 5,500 tonnes per year. Most of the nutrients are discharged to the East coast where the freshwater input is high compared to the rest of Scotland.

Are all nutrient inputs available for algae and plant growth?

Algae and plants use dissolved nutrients. Most of the nitrogen inputs (70%) are in the dissolved form, as nitrate, nitrite and ammonia. Less of the phosphorus inputs (60%) are dissolved. 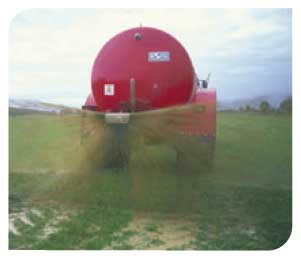 Rivers are the main source of nitrogen where it is mainly present as nitrate. Wastewater from sewage treatment plants is the main source of phosphate and contributes relatively small amounts of nitrogen in the form of ammonia and organic nitrogen associated with particulate matter. Within Scotland there are relatively high inputs of nitrate from arable land on the east coast and relatively high inputs of ammonia and phosphate from urban areas in the West and East.

Recent estimates of nutrients from the caged fish farm industry suggest they may be a significant source in the north and west of Scotland where freshwater inputs are low. The total nitrogen released from the caged fish farm industry in these areas is estimated to be similar to inputs from aqueous discharges at about 8,000 tonnes per year. Inputs of total phosphorus in these areas are about 1,000 tonnes per year. However, nutrient inputs from fish farms are mainly in the form of faecal and particulate organic matter, which is deposited on the seabed. Unlike dissolved nutrients in aqueous discharges, this organic matter is not immediately available as food for algae.

Is eutrophication a problem? 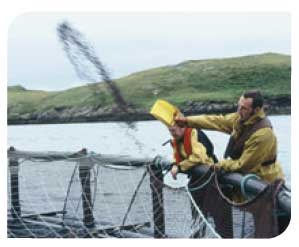 The concentration of dissolved inorganic nitrogen 1 ( DIN) in winter is used as an index of nutrient enrichment in marine waters, as DIN usually limits algal growth in seawater. In winter, there is little removal of DIN by the growth of algae in the water column so the use of winter concentrations helps to reduce the variability in measurements. The concentration of DIN is considered high if it is more than 50% above a background concentration taken as 10 µM in seawater and 42 µM in river water. 2 Enrichment with nitrogen is therefore indicated by concentrations of DIN greater than 15 µM in offshore waters and 18 µM in regions of freshwater influence such as coastal waters. In estuaries, nitrogen enrichment is indicated by concentrations greater than 30 µM measured at a salinity of 25, which represents an approximate mix of 1:2.5 parts freshwater:seawater.

Evidence of excessive growth of phytoplankton

Chlorophyll concentrations in Scottish coastal waters are generally less than 15 µg/l with the exception of a few sites in the inner Firth of Clyde.

Excessive growth of opportunistic green algae in estuaries is assessed from the coverage and density of the mats formed by the algae on the intertidal area compared to a natural background or reference condition.

The extent of algal mat growth is monitored in two small estuaries on the East Coast where they are known to occur, the Ythan estuary and Montrose Basin in the South Esk estuary. Under the EC Water Framework Directive ( WFD), the deviation from the background or reference condition is expressed as a number called the Ecological Quality Ratio ( EQR) which is then classed from High to Bad. Algal mat growth in the Ythan estuary is close to the good/moderate boundary whereas algal growth in Montrose Basin is close to the moderate/poor boundary.

What the evidence indicates

There is no evidence of nutrient enrichment leading to accelerated growth of phytoplankton in Scottish coastal waters with the exception of a sea loch in the inner Firth of Clyde. There is evidence of nutrient enrichment leading to excessive growth of opportunistic green algae in the Ythan estuary and Montrose Basin. However, there is no evidence that the algal mats cause an undesirable disturbance as there are abundant benthic invertebrate populations in both these areas, and they support nationally important populations of wading birds. 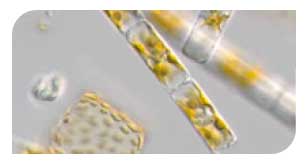 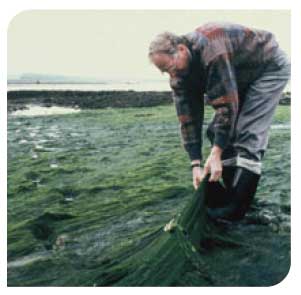 What can be done to prevent eutrophication?

Areas with high nitrate concentrations in surface or groundwater have been designated as Nitrate Vulnerable Zones ( NVZs), with measures set in place to regulate and reduce the application of fertiliser to agricultural land. The Ythan estuary was designated as an NVZ in 2000 and there is some indication that algal mats have decreased in recent years. The catchment for Montrose Basin is also designated as an NVZ, but there is insufficient data to assess any recent changes in the growth of algal mats. Recovery is expected to be slow as there will be a time lag between a reduction in fertiliser use and the reduction of nitrate concentrations in surface waters due to the large pool of nitrogen retained in the soil. Trends in inputs from land are also affected by changing weather patterns as an increase in rainfall causes an increase in nitrates washed off the land into rivers and discharged to sea.

Improvements to the treatment of waste water discharges have reduced inputs of nitrogen and phosphorus by removing the organic forms associated with suspended solids and converting ammonia to total oxidised nitrogen. Nitrogen inputs from waste water currently contribute 10% of the total dissolved inorganic nitrogen (ammonia plus total oxidised nitrogen) discharged to sea.

Spatial distribution of algal mats in the Ythan estuary