What is the source of silver in the aquatic environment?

Historically, silver entered the aquatic environment in the effluents from sewage treatment works. The main source was photographic chemicals. However, the use of photographic chemicals has decreased significantly, as a result of the increasing use of digital cameras. In recent years, recognition of the antimicrobial properties of nano-silver (extremely small particles of silver) has led to an increase in the use of silver in nano-particles added to clothes during their manufacture to prevent bacterial activity on the surface.

Why is silver of concern in the environment?

Silver is classed as an environmental hazard because it is toxic, persistent and it accumulates within animals. The release of silver from photographic processing led to evidence of adverse ecological effects. Recent studies suggest that nano-silver may be more toxic than inorganic silver (i.e. silver that is not incorporated within biologically-generated material, Gaiser et al 2009 (5)), and studies have confirmed that these particles can be taken up by mussels (Luoma, 2008 (6)). Silver nanoparticles have been found to cause DNA damage and chromosome aberrations in human cell cultures (Ashern Remi et al, 2009 (7)).

Concentration of silver in the marine environment

Silver was measured in intertidal mussels from a range of sites around Scotland. There is currently insufficient data to assess the ecological significance of measured concentrations in mussels so the data have been split into quartiles to allow spatial comparison. Overall the concentration of silver in mussels is lowest in less densely populated areas and highest in industrialised estuaries. However, relatively high concentrations are measured in mussels collected close to sewage treatment works in less populated areas, suggesting that the presence of the metal in mussels is associated with these point source discharges. 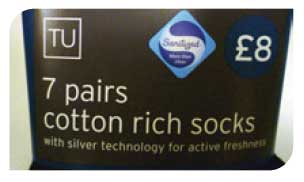 What the evidence indicates

Given the decline in the use of silver in photography, the detection of elevated silver concentrations in mussels collected close to sewage discharges is probably caused by the increasing use of nano-silver as an antibacterial agent in clothes. Nano-silver is leached from clothes during washing and hence released to the marine environment via waste water discharges. Once in the marine environment the particles are taken up and retained by filter-feeding organisms such as mussels.

What further evidence is needed?

Further information is needed on sources and the effects of silver on organisms in the marine environment in order to consider whether controls need to be established.