Ports and shipping provide for the transport of freight and passengers. This includes key international and coastal shipping routes including ferry services to the Scottish islands. A few ports specialise in specific cargos, for example, Sullom Voe for oil, and Glensanda for crushed stone. The majority are multi-purpose even if they are well known for one particular commodity, such as Peterhead for fish. Other ports may play an important role for a particular industry such as Aberdeen in supporting North Sea oil and now for the developing offshore renewable energy industry.

The movement of vessels is recorded by the Maritime and Coastguard Agency, Lloyds List Intelligence and others, such as individual ports. Data sets are not always comparable, with a different range of categories being used and certain types of ports or vessels, for example, fishing, recreational, local ferries, not featuring in all types of statistics.

Types and examples of Scottish ports

All Scotland's ports contribute to their local and regional economies as employers and by providing essential facilities for users such as the fishing industry and ferry operators. In many cases they also contribute to the national economy and economic growth.

From the ABI the GVA (2009 prices) and number of jobs for sea and coastal water transport and supporting activities was £432M and 4,700, and for building and repairing of ships and boats the equivalent GVA was £475M, with the number of jobs at 5,800, all in 2007. These values cannot be disaggregated to individual sea areas.

There are other sources of economic data. Oxford Economics reports for the Chamber of Shipping (3) have estimated that from a turnover of £9.5 billion the shipping industry contributes about £4.7bn GVA to the UK. A further report for the UK Major Ports Group (4) suggests that ports contribute around £7.7bn to UKGDP. Neither report presents a breakdown for Scottish shipping or ports. However, Scottish ports handle about 17% of UK trade by volume.

Hull sections of two new aircraft carriers are currently being constructed at five UK sites (including the Clyde and at Rosyth). All vessels will be assembled at Rosyth. All six Daring class Type 45 destroyers are being built on the Clyde (some parts come from outside Scotland). 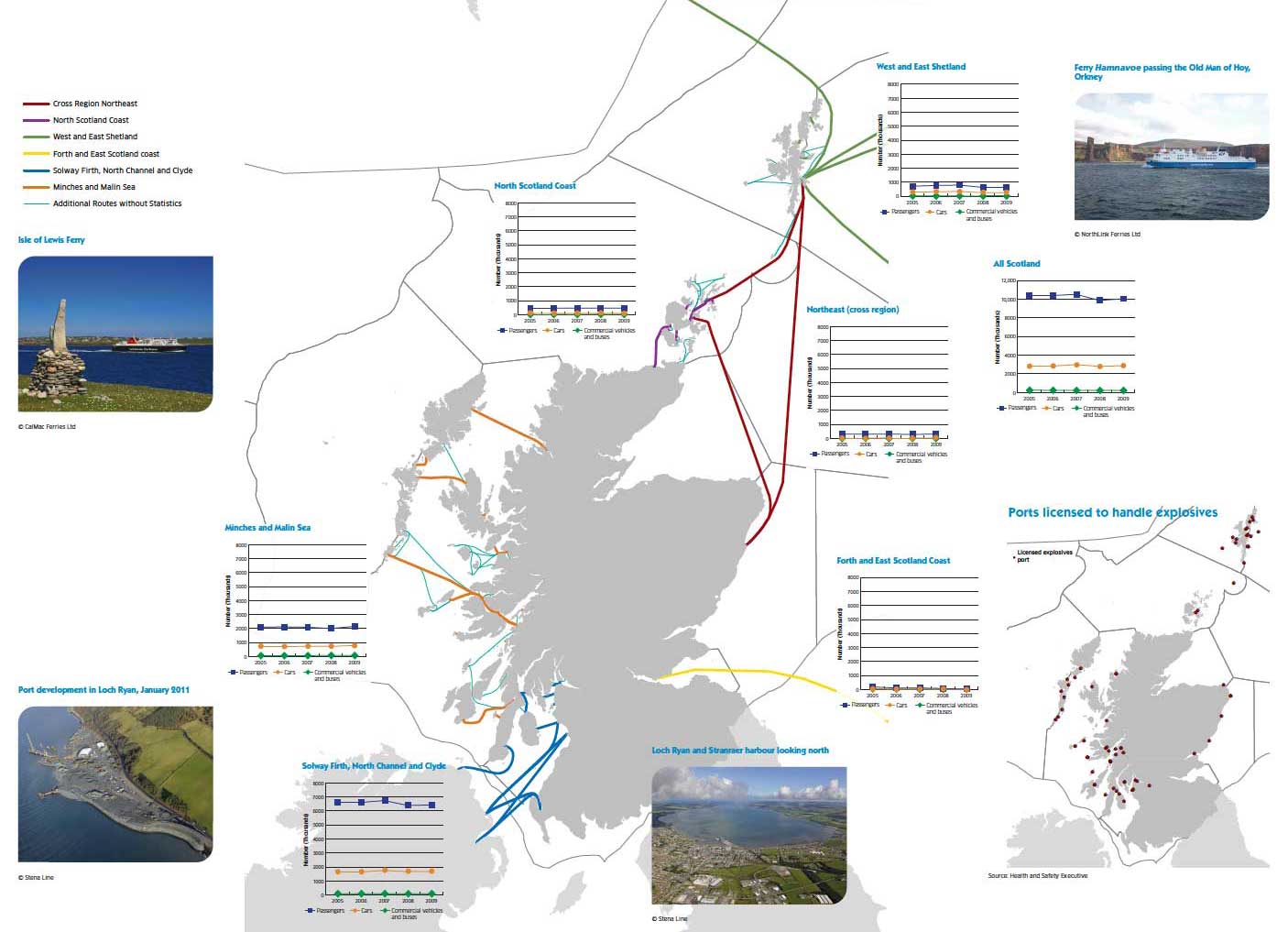 Pressures and impacts on theenvironment

Pressure theme: Pollution and other chemical pressures
Pressure: Release of antifouling substances
Impact: Result in contamination of water and sediments and biological impacts on biota.

Pressure: Introduction of non-synthetic substances and compounds
Impact: Accidental release of oil and other hazardous substances, (either cargo or fuel, discharges from port facilities and shipbuilding/ ship repair yards) may result in contamination of water and sediments and ecological impacts on wildlife, mariculture and tourism (see Chapter 3).

Pressure: Noise from dredging
Impact: Potential impacts on noise sensitive species, such as cetaceans and some fish species.

Pressure: Litter
Impact: Litter poses a risk of harm/death to marine wildlife through ingestion of, or entanglement.

Pressure theme: Biological pressures
Pressure: Introduction or spread of non-native species
Impact: Non-native species may be carried in ballast water and as fouling organisms on hulls. These may cause habitat modification and competition with native species.

Pressure: Microbial pathogens
Impact: Release of sewage introduces pathogens and nutrients into the water, affecting water quality and potentially passing on diseases to humans through contact with contaminated water or consumption of contaminated shellfish.

There are environmental benefits. Transport by water is a key part of the transport infrastructure, providing economies of scale and produces less CO 2 than comparable modes of transport per tonne-kilometre/ per passenger-kilometre. Navigational dredging can provide material for beach replenishment schemes. Artificial shoreline infrastructure may provide habitat for colonisation.

Monthly vessel traffic through the Minches in 2009

Pentland Firth and the Minchestraffic

Shipping traffic through the Pentland Firth and the Minches is of particular interest since much of this does not stop at Scottish ports. However, not all traffic, for example fishing vessels and recreational craft, are counted.

The Scottish Government has devolved responsibilities for ports, and has developed its own ports policy under the Scottish National Transport Strategy. (8) The sector is important to the economy and for economic growth. There are no robust data available on any future expansion, ports' policy follows a market driven approach to port development. 95% of goods moving in and out of the UK go by sea and there is little scope to use alternative means to do this. New ship technology and larger ships will tend to lower the costs per tonne-kilometre but may require ports with new or improved access to deeper water.

Forecasts for the UK have led the Department for Transport to conclude in its draft National Policy Statement for Ports covering England and Wales, that 'there is a compelling need for substantial additional port capacity over the next 20-30 years, to be met by a combination of development already consented, and development for which applications have yet to be received'. (9) There are substantial opportunities for some of this additional capacity to be met in Scotland. The Scottish Government's Second National Planning Framework ( NPF2) (10) identifies development opportunities to accommodate container traffic along the Firth of Forth, Scapa Flow and Hunterston. It also supports improvements to facilities for ferry services at Loch Ryan. Existing and potential facilities at Cromarty Firth and Nigg Fabrication Yard are identified within the Framework as being of strategic importance.

Ports and shipping will continue to play an important role in the movement of goods and people. As well as the environmental benefits of this, for example contributing towards climate change targets, the industry will have a significant role to play in making the most of opportunities offered by offshore renewable energy.

The Scottish Government is undertaking a comprehensive review of ferry provision throughout Scotland. The Review is considering how ferries should be funded and procured, on what basis fares should be set, what kind of services should be supported with public money and who should be responsible for providing these services. The Ferries Review will result in a long-term Plan for ferry services to 2022. 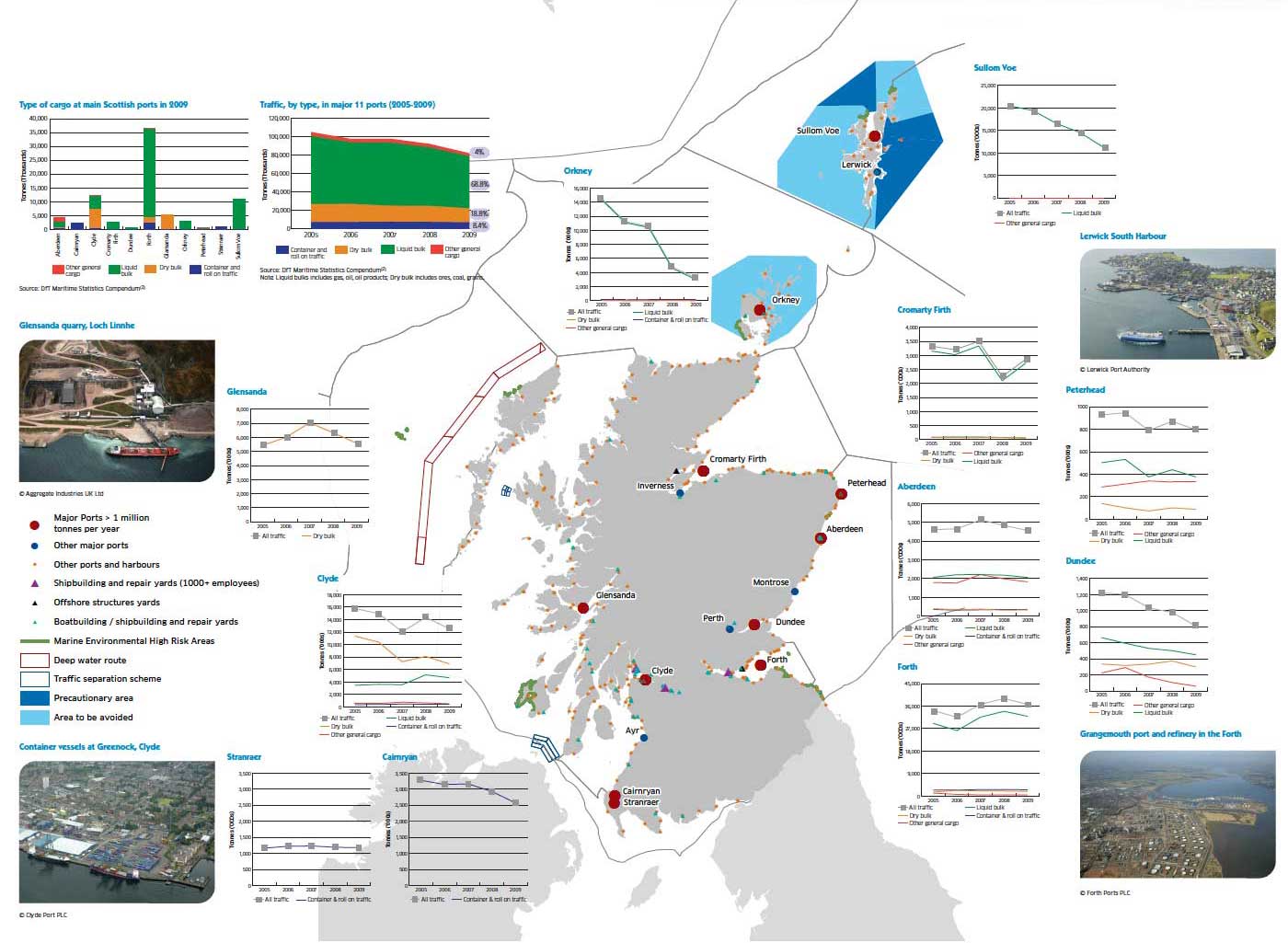 Shipping traffic: number of vessels in a given area during 1st week January 2010 based on Maritime and Coastguard Agency AIS data