Ocean circulation is the large scale movement of waters in the ocean basins. Currents are driven by a combination of wind, planetary rotation and changes in water density as water evaporates from the sea surface and also as it re-enters from the land as fresh, low density water. The subsurface currents are mainly driven by differences in the density of seawater caused by changes in temperature and salinity. Subsurface currents generally travel at a much slower speed when compared to surface flows.

Despite the significance of this circulation, current speeds are relatively low compared to those in shallower waters. Currents speeds can be intensified around topographic features so areas such as the Rockall Bank and the edge of the continental shelf have faster currents associated with them. The general pattern of circulation within the North Atlantic is represented schematically in the map (above right).

Circulation map representing the general circulation pattern within the North Atlantic. It should be noted that flow is not confined to these arrow tracks. Circulation of warmer saltier water in the sub-tropical gyre are shown by the red arrows with the cooler fresher waters of the sub-polar gyre shown as white arrows. 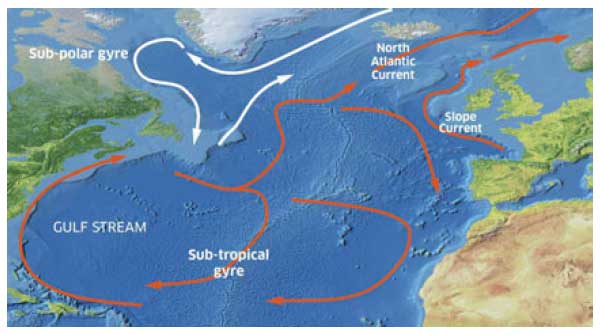 The map does not show the fine detail associated with the complex circulation of water. Currents change over shorter timescales because of complex effects such as mesoscale meanders and eddies, internal tides, internal waves, fronts and storm surges.

In addition to the North Atlantic Current, a jet-like current, known as the Slope Current, flows in a poleward direction along the edge of the continental slope with speeds in the range of 15 to 30 cm/s, and centred approximately over the 400-500 m depth contour. The waters in the Slope Current are thought to originate from the Iberian region and some of the North Atlantic Water that reaches the Bay of Biscay joins the Slope Current. Also on the continental slope, tides cause a large wave to form on the thermocline and this breaks when it hits the continental shelf causing mixing and nutrients to be brought closer to the surface. These features vary seasonally but are important sources of heat and nutrients, and enhance plankton growth in the waters around Scotland. They form important habitat for fish which are the subject of commercial fisheries.

Scotland, and the wider UK, contribute to developing our knowledge of ocean circulation by supporting global observing systems and by placing data within international databases. Measurements are made using ships, buoys, moorings, aircraft and satellites. One system is Argo which is a global array of approximately 3,000 free-drifting profiling floats that measure the temperature and salinity of the upper 2000 m of the ocean. This allows, for the first time, continuous monitoring of the temperature, salinity and velocity of the upper ocean, with all data being relayed and made publicly available within hours after collection.

In the North Atlantic as well as the surface circulation, there is a flow of deep water returning at depth from the Arctic. Two technical terms often associated with this circulation are the Thermohaline Circulation and, more recently, the Atlantic Meridional Overturning Circulation ( AMOC). The AMOC has been the subject of intense study in recent years, because of its significant contribution to climate variability and the possibility that the effects of global climate change will weaken the AMOC, possibly bringing the cold Arctic water further south at the surface and having a cooling effect upon Scotland and Northern Europe.

The return flow of deep water from the Arctic to the North Atlantic is evident from the presence of cold water at depth in the Faroe Shetland Channel (below 400-600 m) that has its origin in the Iceland, Greenland and Norwegian Seas. The presence of both sub-tropical water on the surface and Arctic water at depth brings diverse ecological conditions to Scotland's waters. The cold deep waters from the Arctic, which travel in a south-eastward direction through the Faroe Shetland Channel, are diverted westward by the Wyville Thomson Ridge and eventually spill over into the deep basin of the Rockall Trough. There are also intermittent overflows through deep channels in the Wyville Thomson Ridge that are as yet unquantified.

Monitoring in the Faroe Shetland Channel

The Faroe Shetland Channel, to the north-west of Scotland is an important area as both surface and deep waters flow through the Channel as they move from the one ocean basin to another. Changes in the properties of the deepwater are thought to be related to changes in the surface circulation and the wider scale climatic changes. Two hydrographic sections across the Faroe Shetland Channel have been surveyed for over a century (white triangles) and are situated at a key point to allow these changes to be monitored. The currents flowing through the Channel are also being measured directly using an array of Acoustic Doppler Current Profilers ( ADCPs) ( 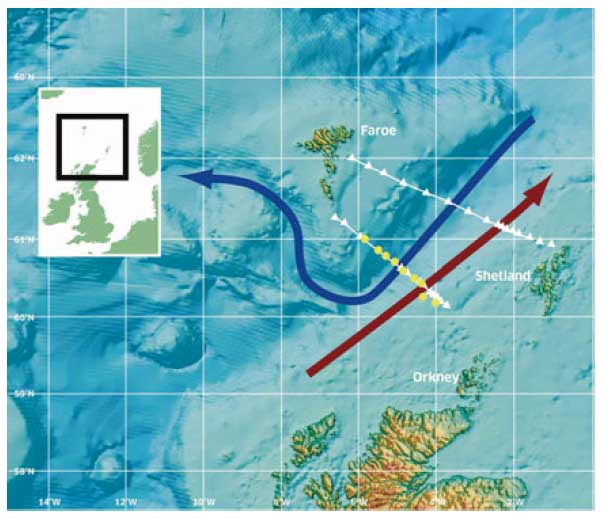 Measuring how fast water is moving

An Acoustic Doppler Current Profiler ( ADCP) is used to measure how fast water is moving. An ADCP anchored to the seafloor can measure current speed not just at the bottom, but also at equal intervals all the way up to the surface. The ADCP works by transmitting "pings" of sound at a constant frequency into the water. As the sound waves travel, they scatter off particles suspended in the moving water, and reflect back to the instrument. Due to the Doppler effect, sound waves bounced back from a particle moving away from the profiler have a slightly lowered frequency when they return. Particles moving toward the instrument send back higher frequency waves. The difference in frequency between the waves the profiler sends out and the waves it receives is called the Doppler shift. The instrument uses this shift to calculate how fast the particle and the water around it are moving.

Circulation map representing the general circulation pattern within the North Atlantic and North Sea areas. It should be noted that flow is not confined to these arrow tracks. Circulation of Atlantic water is shown by the white arrows with coastal circulation represented by the green arrows.

The coastal circulation around Scotland and in the North Sea (green arrows) will show considerable seasonal variation in both strength and positioning, responding mainly to changing patterns of wind. During the summer months some of this circulation consists of frontal jets that are associated with density fronts and will therefore be altered with the loss of stratification during the autumn and winter. 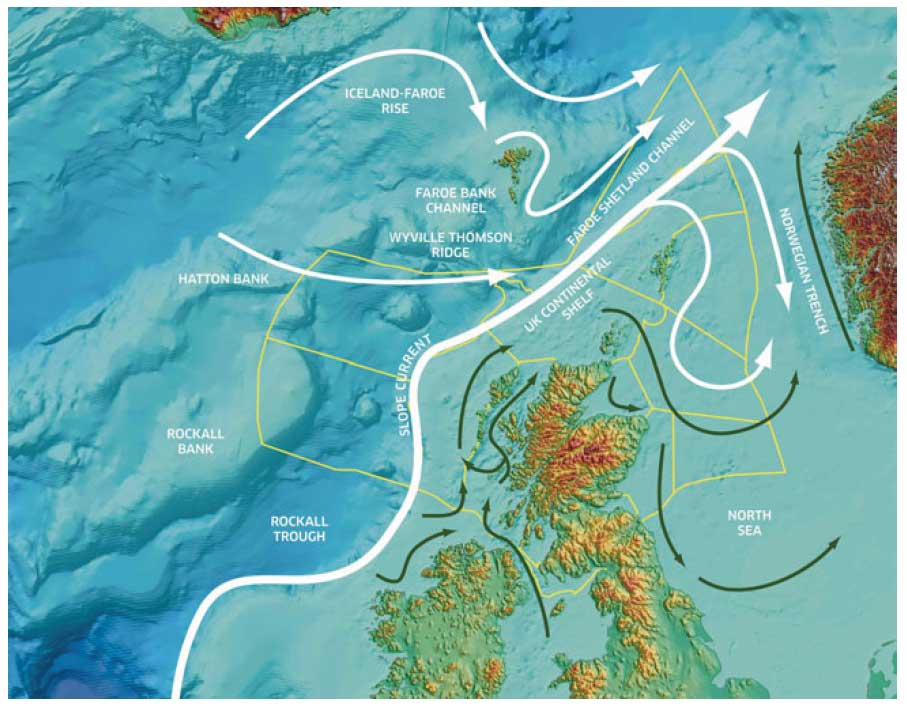 Scotland's position on the UK Continental Shelf means that the seas around Scotland are directly affected by oceanic circulation. The steep bathymetry of the continental slope acts as a barrier between oceanic regions and the shelf sea systems, reducing the amount of water that can travel from the deeper waters of the North Atlantic into the shallower waters on the continental shelf. Processes that cause mixing of oceanic waters and shelf sea waters are complex but have a significant impact on conditions in Scottish waters. Most waters from the North Atlantic that enter the North Sea do so between Orkney and Shetland, around the north east of Shetland and through the deep Norwegian Trench. Tidal currents are predictable and stronger than the non-tidal currents in many areas. Tidal currents cause mixing in the water column and therefore often determine the location and extent to which the water column is stratified into different distinct layers.

Tidal currents are intensified in localised areas, usually where the flow is constrained by topography. This includes areas such as between Orkney and Shetland, the Pentland Firth, off the Mull of Kintyre and Hebrides where tidal streams can be as high as 3.5-4.5 m/s. However, when the overall transportation of water around Scotland is considered, the effect of the tides is quite small as tidal currents mainly move water back and forth with little net change in displacement of water. The non-tidal circulation in the North Sea is predominantly anti-clockwise and circulation on the shelf west of Scotland, (the Scottish Coastal Current) is mainly northwards. However this circulation is strongly affected by winds and density-driven coastal currents and jets, which can lead to large changes in currents and even a reversal of this general pattern for short periods.

Seawater contains suspended particulate material ( SPM) which comprises mineral particles as well as living and dead plankton. There is an association between SPM and the turbidity of marine waters. Turbidity is highest in coastal areas with large fresh water input (e.g. Clyde Sea and the Forth/Tay river plume). Compared to the southern North Sea, the Scottish North Sea has much lower concentrations of suspended sediment. The turbidity of water influences productivity, as murky waters limit the penetration of light and can inhibit photosynthesis. 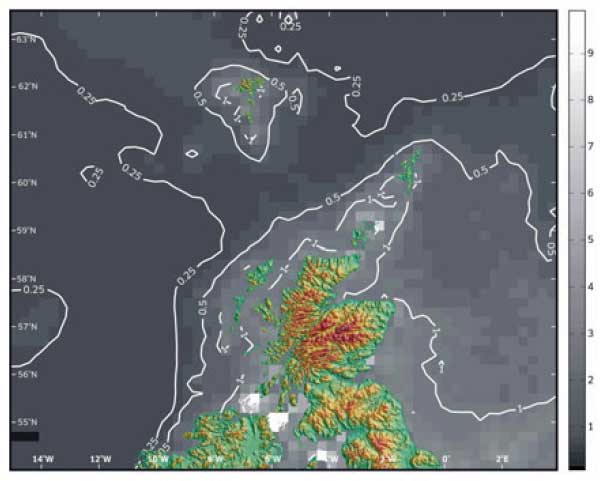