Renewable energy is widely regarded as a cleaner source of energy than fossil fuels. Scotland's traditional energy sources, such as oil and gas, are also finite and securing sustainable clean energy from the marine environment could help meet Scotland's future energy demands.

Development of offshore renewable energy will help to provide Scotland with a secure energy supply and could lead to Scotland becoming a major energy supplier to other parts of the UK and Europe. However, there are significant challenges associated with meeting the targets both in terms of engineering and of ensuring that there are net environmental benefits. The infrastructure required for grid connection also requires a major upgrade to support developments.

It is estimated that Scottish waters have the potential to generate around 10% of Europe's wave power and possess 25% of the potential European offshore wind and tidal resource. Scotland has almost 40% of the total UK resource.

The Crown Estate awarded the world's first commercial leases for wave and tidal energy generation in 11 sites in the Pentland Firth and Orkney Waters (see case study). It also granted exclusivity agreements to offshore wind energy developers for ten areas in territorial waters and similar agreements, for two wind farm development areas beyond 12 nautical miles under the Round 3 for wind farm leasing.

The Scottish Government has prepared a draft development plan for offshore wind in territorial waters which has identified 25 medium term options with potential for development. The plan identified the ten areas subject to exclusivity agreements as short term development options.

A socio-economic assessment and regional locational guidance are being developed to ensure the full impacts (socio-economic and environmental) of development are considered. A number of studies undertaken by the Scottish Government indicate that the development of the sector will have a positive effect on jobs in the manufacturing and engineering supply chain, particularly in remote communities. The National Renewables Infrastructure Plan ( NRIP) (6) has identified that the size, design and transport issues of many of the offshore renewable devices mean that it will be preferable to manufacture and assemble as close to the development sites as possible.

Pressures and impacts on the marine environment

Pressure theme: Climate change and physical pressures
Pressure: Hydrographic changes (due to extraction of energy and/or presence of structures in the sea)
Impact: May alter energy distribution at the sea bed and in the water column. Most relevant for species and coastal features that are strongly correlated with or dependent on particular wave or current speed environments.

Pressure: Changes to physical environment
Impact: Species may be displaced by, or attracted to, new structures in and above the sea.

Pressure: Noise (semi-continuous) from exploration, construction, decommissioning activities, cable laying or vessels
Impact: Potential impacts on noise sensitive species, such as marine mammals and some fish, particularly from pile driving and the use of explosives. May result in permanent or temporary hearing damage or displacement from critical habitat for some species in close proximity to activity. In shallow water, noise fields could act as a barrier to movement for some species. 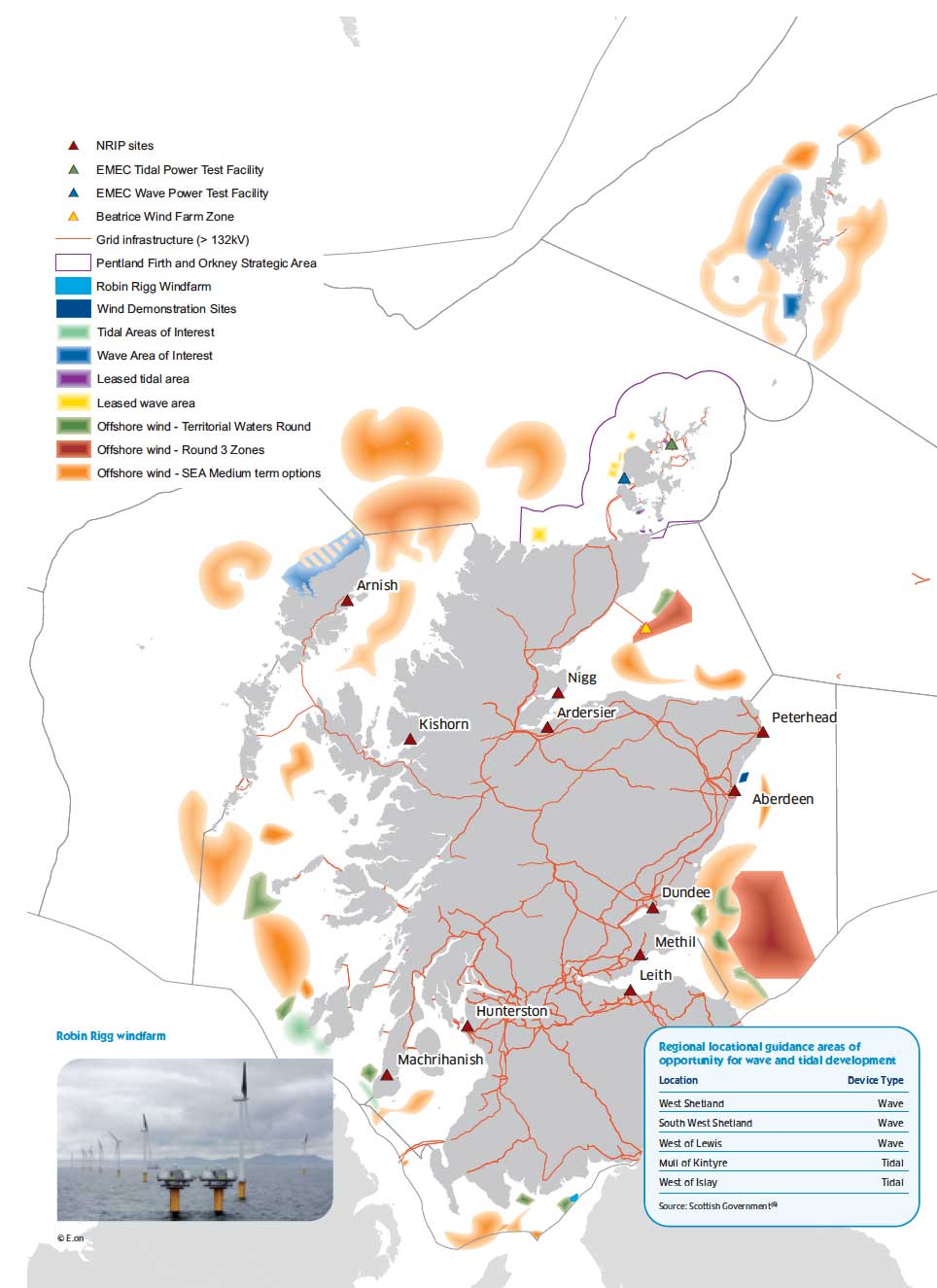 Pressures and impacts on the marine environment

Pressure theme: Habitat changes
Pressure: Habitat loss
Impact: Loss of habitat and species in the footprint of the devices.

Pressure: Smothering
Impact: Sediment may settle after cable laying and result in changes to local biota and habitat.

The uncertainties in current assessments of the environmental effects are being investigated through a joint Marine Scotland and SNH £2M research programme (7).

The Offshore Valuation Study (2), May 2010, estimates that Scotland has 206 Gigawatts of practical wind, wave and tidal resources: almost 40% of the UK total resource. The study has also estimated that harnessing just a third of this practical resource off Scotland's coast by 2050 would mean installed offshore capacity of up to 68 GW: enough to power Scotland seven times over. However, at present it is not known what proportion of the overall resource is exploitable with technology that is likely to become available in the foreseeable future. Neither wave nor tidal technologies are mature compared to current wind power technologies.

The map shows areas of possible offshore renewable energy wind resource. They have been identified through a variety of methods, investigation, analysis and assessment. This assessment is ongoing to find the areas that are most suitable for development, avoiding areas of high use and environmental sensitivity.As technology and knowledge improves, areas will be refined or new areas may be identified.

Marine Scotland has published Regional Locational Guidance (8), under The Saltire Prize Programme, which identifies the five least sensitive areas for wave and tidal developments although development could occur elsewhere. The European Marine Energy Centre ( EMEC) in Orkney is testing and monitoring the environmental and operational effects of new wave and tidal power generating systems in the sea, although it is likely that the effects of each system will need to be understood at each site.

The Scottish Government's second National Planning Framework (14) identifies the future development of a sub-sea electricity transmission super-grid, as well as sub-sea cables to Orkney, Shetland and the Outer Hebrides.

Future contribution to the economy

It is not possible to obtain individual sector data ( GVA and jobs) for marine renewable energy from the ABI. However, other studies show that the potential is large although these cannot be attributed to specific sea areas yet. Submarine power cables are an integral part of the electricity supply chain and it is not appropriate to value these separately.

To investigate the required investment for infrastructure the Scottish Government, Highlands and Islands Enterprise and Scottish Enterprise have published a National Renewables Infrastructure Plan ( NRIP) (6). This aims to support the development of a globally competitive offshore renewables industry based in Scotland. It sets out the investment that port owners estimate is needed fully to develop 11 port sites for use for offshore wind manufacturing. 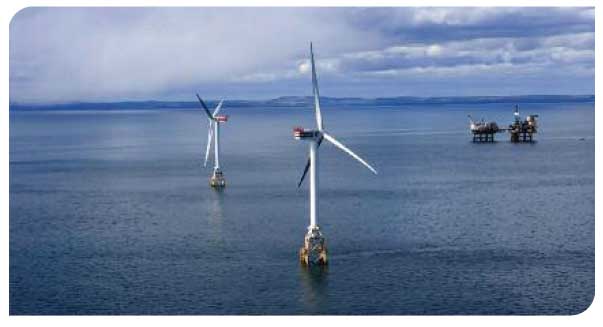 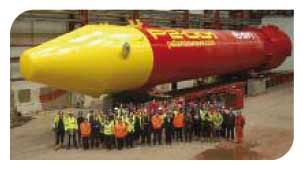 The Crown Estate has awarded 11 lease agreements to marine energy developers in the Pentland Firth and Orkney Waters. This is the world's first commercial leasing round for wave and tidal renewable energy generation. 11 agreements were signed for six wave and five tidal projects with a potential capacity to generate 1.6 GW of marine energy, sufficient capacity to power over one fifth of Scottish households. The capital investment required within the Pentland Firth and Orkney waters is estimated to be between £2-3 billion between 2010 and 2020. The Crown Estate has also estimated that this could build up to £300 million per annum of operation and maintenance service requirements by 2020.

The award of leases was an important milestone for the global sector and shows Scotland's position at the forefront of marine energy development. The Pentland Firth and Orkney waters projects will be an important contribution to UK and European renewable energy targets. Scottish Ministers are responsible for licensing and consenting the projects, utilising the new streamlined marine planning and consenting regime in the Marine (Scotland) Act 2010.