DISSOLVED OXYGEN IN THE CLYDE AND FORTH ESTUARIES

Why is dissolved oxygen measured?

Oxygen is removed from the water column by microbial activity involved in the breakdown of organic matter contained in natural detritus, sediments and discharges of organic waste from sewage treatment plants and industry.

Oxygen is considered to be depleted when removal exceeds supply from the atmosphere and from photosynthesis. 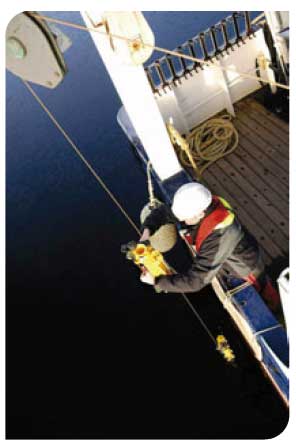 The Clyde estuary receives organic waste from the large conurbation of the Greater Glasgow region. Degradation of this organic matter deposited in the sediments and suspended in overlying water meant that the inner estuary was essentially devoid of dissolved oxygen in the 1970s, although there were slightly higher concentrations in the outer estuary. Dissolved oxygen concentrations increased as discharges of organic waste declined as a result of improvements to effluent treatment. This increase in dissolved oxygen resulted in the reappearance of salmon in 1983 following an absence of over a century. Salmon have reappeared each year since, along with increasing numbers of other fish species.

Further reductions in discharges of organic wastes may not result in an immediate increase in dissolved oxygen as organic matter trapped in the sediments continues to remove oxygen from the overlying water. Land reclamation and dredging have made the inner Clyde narrower and deeper than its natural state. These changes have reduced the strength of the tidal currents causing less mixing between freshwater and the incoming seawater, resulting in layering of the water column. This layering inhibits the transfer of oxygen from the surface allowing deeper water to become depleted in oxygen. A numerical model of the Clyde estuary is being used to predict the most cost effective option for increasing dissolved oxygen in the Clyde. These options include: 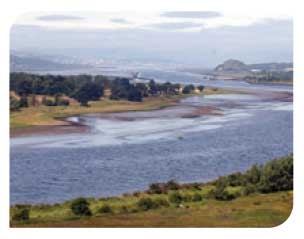 A zone of low dissolved oxygen occurs in the upper Forth estuary which is most pronounced during warm, dry weather in summer. This dissolved oxygen 'sag' is caused by the degradation of organic matter by bacteria attached to particulate matter in the muddy waters of the upper estuary. Bottom sediments are stirred into the overlying water of the upper Forth estuary by turbulence created when the incoming tide meets the outflowing river water. This creates a turbidity maximum zone downstream of the freshwater/ saltwater interface which extends for several kilometres. This natural process is exacerbated by the degradation of organic waste discharged from sewage treatment plants and industry. The amount of oxygen consumed by effluent can be estimated using the biochemical oxygen demand ( BOD) which measures the oxygen removed from a sample incubated at 20°C for five days. Dissolved oxygen concentrations in the upper Forth estuary have increased as discharges of organic waste have decreased.

Most of the oxygen is currently removed by the degradation of organic matter in the turbidity maximum zone. Numerical modelling is being used to establish the options for further improvement. These include: 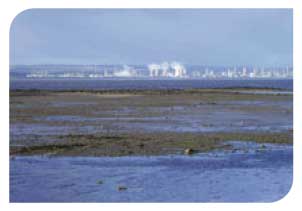 The increase in dissolved oxygen concentrations in the Forth estuary led to the reappearance of Sparling in 1989. The numbers of this oxygen sensitive species have continued to increase.