An international network passes north and south of Shetland connecting Europe to North America, Faroe Islands, Iceland and Greenland. Scottish islands are generally connected to the mainland network by a combination of seabed cables and microwave transmission.

Cables tend to be laid on seabed with a shallow gradient and soft sediment, often meandering to find the most suitable route around any seabed obstructions.

Today, international cables are exclusively fibre optic which carries many thousands of simultaneous transmissions. Domestic inter-island cables are still normally copper wire. There are 4,802.33 kms of active cable in Scottish seas. During the last five years, a number of new cables have been laid to extend internet access to Orkney, Shetland, Faroes, Iceland and Greenland. These include the CNS Fibre Optic, Northern Lights, SHEFA and DANICE. The remaining cables on the map were laid between the late 1980s and 2004.

The alternative method of communication to using cables would be via satellite. A transatlantic call from Scotland costs approximately 17.3p/minute via cable and 72p/minute by satellite phone (1). It is also reported that cable connections are more reliable.

It is difficult to estimate the direct use value of the cables in the marine environment. A calculation based on the throughput of telephone calls has been made although this ignores the enormous potential value of internet traffic.

Approximately 40% (4,163 kms of 11,000 kms) of all the UK's active international cables are on the Scottish seabed. Adopting the methodology in Charting Progress 2, the estimated value of the telecommunications industry in Scottish waters is £1.02 billion (2) but it is inappropriate to attribute this between the Scottish sea areas. It is also not representative of the direct contribution to the Scottish economy as the traffic does not necessarily start or end in Scotland. What it shows is that Scotland's seabed has a significant value because of the amount of telecommunications traffic passing through cables laid on it. Further, the figure underestimates the potential strategic and economic benefit of the data carried, including internet traffic. More generally, the economic and social benefits of the internet underpin the Scottish Government's Digital Strategy. The number of jobs associated with submarine cables is not known.

Pressure theme: Habitat changes
Pressure: Abrasion
Impact: Deployment and burial of cables (during installation) has the potential to damage some sea bed communities.

Pressure: Habitat loss
Impact: Loss of habitat and species in the 'footprint' of the cable.

Source: Marine Scotland based on BT and Kingfisher Charts data.

In today's world of electronic media the importance of the communications sector and its contribution to the economy is widely recognised. UK Cable Protection Committee data show that 95% of international trans-ocean traffic is carried by cable. Submarine cables will be vital for the foreseeable future. The extent to which any new cables will be laid in Scottish waters is not known. The number of additional submarine cables on the Scottish seabed will depend on a variety of factors such as the destination countries and the most suitable starting point for such a cable.

New cable laying technology means that future cables could be buried deeper, so lessening the restriction of other seabed users, but this will have to be balanced against ease of access for maintenance. 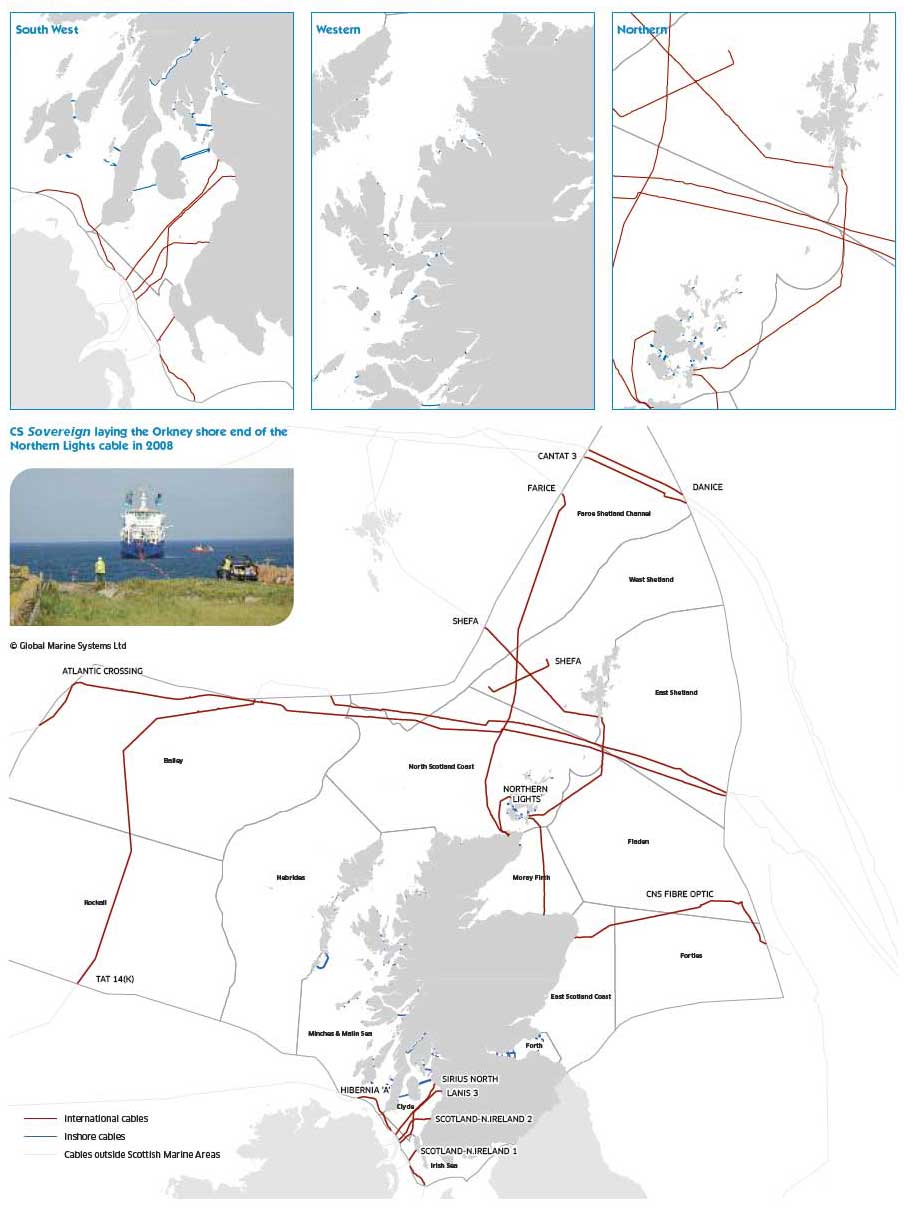