Plankton is the term for organisms that drift in the sea, from bacteria through microscopic plants (phytoplankton) and animals (zooplankton), to large jellyfish and the larvae of most fish and shellfish. Phytoplankton and zooplankton form the base of the food chain and sustain all other life in marine ecosystems. Plankton are sensitive to the environment in which they grow and a number of climate driven changes have already been identified in the North-east Atlantic area from the data collected by the Continuous Plankton Recorder ( CPR). Ocean acidification is also likely to have an impact on the plankton components of the food web through the speciation of nutrients in the water column as well as its influence on calcifying organisms.

Plankton have a very rapid turnover rate (on a scale of days/weeks) and so in order to obtain an accurate estimate of their abundance and diversity a high frequency time series of data is required. There are few historic records of plankton abundance from Scottish waters. The longest data sets from the CPR are from the east coast region and the Northern Isles. This time series has revealed a number of changes in the plankton community on a decadal scale. An apparent regime shift occurred in the late 1980s which resulted in directional shifts in the composition of both the phyto- and zooplankton communities in the North Sea. This shift in the plankton community was also reflected in changes in larval fish populations.

A number of differences in the diversity of the phytoplankton community around the Scottish coast have been observed between 2000 and 2009. For example, the diatom Mediopyxis helysia has only recently been described from samples in the southern North Sea. To date this species has only been identified in samples from CP2 region 1 (east coast) in Scottish waters. The distribution of this species is being observed to examine if its range expands into other regions. The dinoflagellate genus Ceratium has been observed along the east and west coasts and around the Orkney Islands. Its abundance at the Shetland monitoring site, has been consistently lower than in these other areas. In contrast, the dinoflagellate genus Gonyaulax has been dominant at this Shetland site during the summer months. These data suggest that the diversity of the phytoplankton community in Scottish water exhibits regional differences.

Phytoplankton species showing a regional distribution around the Scottish coast

Small flagellates (< 10 µm in diameter), nanoplankton (< 2 µm in diameter) and picoplankton (< 0.2 µm in diameter) have been identified as important primary producers in the marine food web. Little is known about these organisms in Scottish waters. These phytoplankton require additional microscopic techniques (such as transmission electron microscopy) or laser based fluorescence (flow cytometry) to allow identification and counting. A preliminary study was performed on the diversity of the haptophyte genus Chrysochromulina in 2008. These are very small flagellated cells, approximately 5 µm in diameter. Chrysochromulina polylepis has been associated with fish mortalities in Scandinavia and its interplay with the spring diatom bloom and resulting influence on the marine food web has yet to be fully investigated. Examination of Chrysochromulina cells from the phytoplankton monitoring sites has highlighted the difference in the diversity of species found between east and west coasts.

Phytoplankton occupy the very base of the food chain, they utilise energy from the sun which is passed up the marine food web when grazed by zooplankton. Phytoplankton growth declines in the winter because it is limited by the short winter days and lower water temperatures. During spring, as the days lengthen and the waters begin to warm, there is a rapid burst of phytoplankton growth, dominated by small rapidly growing diatoms. This is known as the spring diatom bloom. During the summer months the phytoplankton community is dominated by dinoflagellates. In some years, but not all, there is a second bloom of diatoms in the autumn. The diatom species dominating this autumn bloom are larger than those found in the spring. The phytoplankton community in Scottish waters is typical of those found in northern latitudes.

Many phytoplankton species experience periods of rapid growth where they multiply in number to form a bloom. Phytoplankton blooms are natural events but some can have a negative impact on the marine ecosystem and associated activities. These are known as 'Harmful Algal Blooms' or HABs. HABs in Scotland have been responsible for the death of benthic organisms because of toxins produced by the algae or because of anoxia caused by the algae removing oxygen from the water. HABs can result in enforced closures of shellfish harvesting areas to prevent algal toxins entering the human food chain. See Microbiological Contamination section in Chapter 3.

The water temperature around the Scottish coast shows regional and seasonal variability (see Temperature, Salinity and Ocean Acidification section in Chapter 2). The water temperature on the west coast tends to be 1-2°C warmer than the east during the spring period. This may explain the difference in the timing of the spring diatom bloom between the phytoplankton monitoring sites in these two regions. During the spring bloom the highest number of diatoms is observed in March at the monitoring site on the west coast whereas on the east coast the highest number of diatoms is observed in May. Since monitoring began in 1997 there has been a change in the dominant species of the spring diatom bloom. The diatom genus Chaetoceros was observed to be more abundant in the late 1990s but more recently the diatom Skeletonema has been observed to be dominant.

With the implementation of the Water Framework Directive ( WFD) in 2000, European member states have evolved systems to assess the biological status of marine waters, using five status levels from bad to high. The phytoplankton community is a key component of the assessment of marine ecosystem 'health' due to its ability to rapidly respond to changing environmental conditions (e.g. sea temperature, salinity, nutrients). The most recent classification of the status of Scottish marine waters used two different tools to assess the health of the phytoplankton community compared to defined reference conditions. The Scottish Environment Protection Agency ( SEPA) sampled phytoplankton, chlorophyll a and associated physical and chemical data at 47 sites across 44 water bodies. The classification was based on species abundance of the major phytoplankton groups (i.e. diatoms or dinoflagellates), and the size and frequency of bloom events. All investigated water bodies in 2008 showed "high" status, displaying a healthy phytoplankton community under the assessment criteria of the WFD.

Ecological Status Classes according to the WFDCIC Guidance (2003). All investigated sites in 2008 were classified with "high" status.

Zooplankton populations form complex communities that react to and cause change in the dynamics and productivity of marine ecosystems. They respond to changes in the availability of food, or in the pressures of predation; and are sensitive to salinity, pressure, temperature, acidity and chemicals, including pollutants. The global rise in atmospheric CO 2, and corresponding increases in ocean acidity, may affect planktonic organisms, particularly those with carbonate shells and skeletons, such as the common planktonic pteropod mollusc Spiratella retroversa which is an important food item for pelagic fish and their larvae. An increase in sea temperature may also cause changes in the timing of life cycle events. Most planktonic organisms are dependent on temperature to stimulate physiological developments, and the seasonal cycles of some have advanced, possibly in response to warming seas. Studies on multi-decadal time-series have shown that the seasonal peak of Evadne species (water fleas) has moved substantially. Such temporal shifts could have implications for other species in the food web.

The predatory arrow worms (chaetognatha) are a major component of the zooplankton community and can sometimes represent 10-30% of the zooplankton biomass in some areas of the world's ocean. The two chaetognath species Parasagitta setosa and Parasagitta elegans that are common in UK seas can be used as indicators of different water masses. There is a difference in the species diversity of these two arrow worms between the Scottish east and west coasts monitoring stations which highlights the habitat differences of these two coasts. On the east coast, P. elegans, which is indicative of mixed coastal and oceanic waters, is most abundant, and on the west coast, P. setosa, which is indicative of more inshore and southern coastal waters, is most abundant. 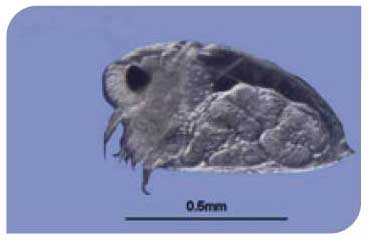 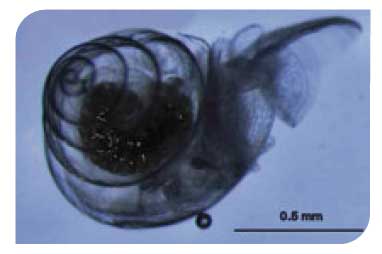 The warming climate is considered to have had a significant impact on the geographic distribution of two key calanoid copepods, Calanus finmarchicus and Calanus helgolandicus. Data generated by the CPR survey have shown that the abundance of the cold water species C. finmarchicus has decreased in the North Sea since the 1960s, whereas at the same time the warmer water species C. helgolandicus has increased. These shifts in plankton have wider consequences for other levels in the marine food web as Calanus species are productive herbivores and an important food source for commercial fish larvae.

More detailed observations than those from the CPR have shown an increasing trend in the abundance of C. finmarchicus on the east and west coasts of Scotland in recent years. This could result in improved feeding conditions for larval fish, as C. finmarchicus is a more lipid-rich source of food than C. helgolandicus. 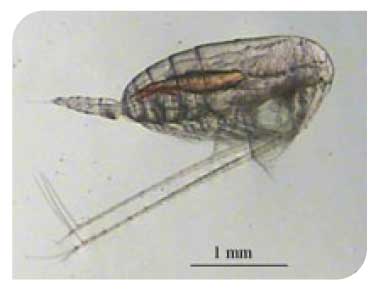