There is a variety of mobile species which can be considered part of the Scottish marine fauna although not permanently resident in our waters. These 'occasional visitors' may sit within three different categories.

1. Species at the edge of their natural range including those whose frequency of occurrence might change in the future as a result of climate change. Two good examples are the striped red mullet Mullus surmuletus and the trigger fish Balistes capriscus. The striped red mullet is a member of the goatfish family, easily distinguished by the pair of long chin barbels below the jaw. This is a demersal (bottom-dwelling fish) found usually on sandy or muddy seabeds where the twin chin barbels are employed to probe the surface of the sediment for items of prey such as small molluscs and crustaceans. The trigger fish is a thick-set, grey fish found normally in rocky habitats. It makes use of a strong, beak-like mouth to take a range of prey from the surface of rocks, including barnacles, starfish and sea urchins. Trigger fish have been occasionally taken in creels and photographed by divers at a number of locations on the west coast of Scotland. Both the striped red mullet and the trigger fish are more common in waters further south in the Atlantic and they reach the northernmost limit of their UK distribution in Scotland. The records of each are relatively scarce and come from a variety of sources including fishermen, anglers and divers, usually in the summer months. It is reasonable to assume that increasing water temperatures will lead to a greater frequency of both species in the future and as such they are potentially useful indicators of change.

2. Seasonal, wide-ranging or migratory species that regularly enter our waters - particularly in the summer months, e.g. the thresher shark Alopias vulpinus. This wide ranging shark is found throughout the temperate waters of the north Atlantic, from Newfoundland to Cuba in the west Atlantic and from Norway to the Mediterranean in the east. In Scotland, it is most frequently encountered in the summer months but these sharks are unlikely to spend their entire lives in one location. Studies of thresher sharks using electronic tags have demonstrated the ability of individuals to travel thousands of kilometres. As a predator of fish the thresher shark is attracted to feed on shoals of mackerel and herring, using its massive tail to stun its prey.

3. Oceanic species that, from time to time, can be seen in inshore waters when conditions allow. The 'by-the-wind-sailor', Velella velella is a species of the open ocean that when conditions allow may be found in inshore waters, usually along the western coasts and sometimes in vast numbers. There are records of strandings on shores in the southern Clyde from the 1950s while the most recent mass stranding was in 2002, again in the Clyde. These strandings may occur in summer or winter. Although superficially resembling a jellyfish, Velella velella is actually a colonial hydroid whose body consists of an oval, disc-shaped float that may be up to 10 cm in length. Some short tentacles hang down into the water below the float while on the top surface is a thin semicircular fin. This fin lies diagonally along the float acting as a sail so that the animal may be propelled, quite literally, 'by the wind'. This sail gives the animal its scientific name (i.e. from velum, a sail) and its common name, 'by-the-wind-sailor'. Velella velella feeds on pelagic organisms, including young fish, caught by stinging cells on its tentacles. The sunfish Mola mola is a predator of Velella velella and, similarly, is another open-ocean dweller which is increasingly seen during the summer months around Scotland. There are records from the North Sea but it is more frequently seen in the west. The sunfish is an unmistakable sight with a body formed into a large, flat disc that may be up to 3m in length and reach a weight in excess of 2000kg. The dorsal and anal fins have become modified to form stiff paddles which propel the fish with a gentle beating motion. The silvery-grey skin is leathery and without scales. The sunfish has a global distribution in both tropical and temperate seas, usually in open water and to a depth of over 400m. The sunfish is most often recorded moving slowly but deliberately at the surface with the paddle-like fin emerging from the water. The sunfish is known to feed on zooplankton and jellyfish.

By their nature, the records for these 'occasional visitor' species tend to be sporadic. However, the mechanisms for reporting, collation and verification of species records have improved in recent years (through initiatives such as MarLIN, Seasearch and the National Biodiversity Network). Consequently, the knowledge base for these 'occasional visitors' is gradually improving, which is essential to provide for their conservation in the longer term.The following is a list of species that could fall into one or other of the categories of occasional visitor.

This should not be treated as a definitive list but is indicative. There is room for considerable debate over their inclusion (especially in waters > 12miles where the lines between occasional and frequent and resident are quite blurred).

Similarly, there are probably species missed off this list but it is derived from the following sources:

a) those for which there is reasonably good data (e.g. sightings for turtles and cetaceans);

c) those that have been drawn to the attention of SNH when members of the public have sent in a query regarding identification.

All four species are listed on Annex IV of the Habitats Directive (Council Directive 92/43/EEC of 21 May 1992) thus placing a responsibility on the UK to maintain and restore their favourable conservation status in its waters, as well as considering the risks of incidental capture. All four species also appear on the IUCN Red List of Threatened Species with the leatherback and Kemp's ridley listed as "Critically Endangered," the green as "Endangered" and the loggerhead as "Threatened". (1) Furthermore the leatherback and loggerhead turtles are on the OSPAR list of threatened or declining species.

Leatherback turtle in Firth of Forth 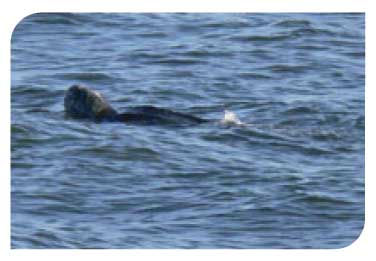 In total for Scotland there have been 156 sightings of turtles at sea and 74 strandings principally located in the north and west of Scotland since accurate records began in 1989. Incidental records of turtle sightings, however, date back to a record of an animal on the Isle of Coll in 1777. The majority (67%) of sightings and strandings occur between July and November probably associated with the increased abundance of jellyfish during the summer months.

The leatherback is the most commonly sighted species of marine turtle in Scottish waters. Although primarily a tropical nesting species, the leatherback is endothermic allowing it to migrate and feed in cooler waters. They are the largest species of marine turtle in the world, the largest specimen recorded in Scottish waters was estimated at 8ft in length, and was observed inshore between Dunnet Head and Brough in the north-east in 1992.

Marine turtles face many pressures including drowning in fishing gear which account for a large proportion of Scottish sighting records as well as through collisions with boats and damage caused by propellors. In addition, plastic debris, and plastic bags in particular, are ingested and become lodged in their gut eventually resulting in a long and painful death from starvation.

The Grouped Species Action Plan for Marine Turtles in UK waters and the UK Overseas Territories (2) prioritises the conservation of the leatherback turtle in UK waters, though little is known about their movements in Scottish waters. The turtle Action Plan is being implemented by a coalition of organisations, government agencies and academic institutions known as the Turtle Implementation Group ( TIG).

Species composition of all Scottish marine turtle strandings and sightings