Non-native species are those species deliberately or unintentionally introduced into the wild by human action outside their natural distribution. Some become invasive where they establish, proliferate and spread in ways that cause damage to native biological diversity and a range of other activities. Invasive non-native species pose one of the most significant threats to marine biodiversity, especially in the light of climate change.

There are a variety of activities that have the potential to bring non-native species into Scottish waters. These include shipping (commercial and recreational), the seafood industry (aquaculture and certain fisheries), scientific research and escapes from public aquaria. Introduction can be either accidental or intentional. Shipping and aquaculture are the most likely sources of their introduction into Scotland, as well as their natural spread from other areas where they are already established.

Vessels of all sizes have the capacity to transport a wide range of species in a number of ways. Ballast water and associated sediments within ballast tanks are important vectors in the global spread of marine non-native species. Non-native species are also transported in other ways including in seawater pipework, in sea chests, attached or entangled on equipment such as anchors and anchor chains, and as fouling on hulls.

Aquaculture has made a significant contribution to the introduction of invasive species. This can include the intentional cultivation of a non-native species within a 'contained' environment that subsequently results in self-sustaining populations in the wild through the escape of adults or the dispersal of larvae. However, more frequently it is the result of unintentional movement of non-native species with fish or shellfish stock. Up to now the extent to which aquaculture has been a factor in the introduction of non-native species in Scotland is relatively small, although the arrival of the Japanese skeleton shrimp Caprella mutica in 2002 illustrates the potential. 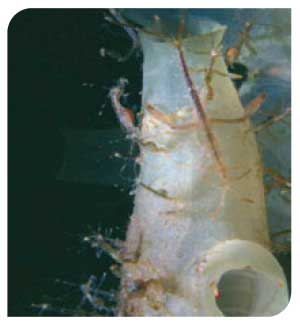 Marine non-native species known to be in Scottish territorial waters

A number of non-native species are known to already be present in Scottish waters but a comprehensive list is lacking. Only a few of these species are currently considered invasive (*), but there are a number that have become widespread and well established.

The potential impact of marine invasive non-native species can be significant, with implications for both biodiversity and the economy.

Action is needed to minimise the risk of non-natives entering the UK and reduce the risks associated with the movement of species outside their natural range. Priorities will include:

It is clear that Scotland, in common with other maritime nations, has a growing problem with marine invasive non-native species. This trend seems liable to continue with other species, such as:

which are already found in England where they have become well-established and could arrive in Scotland in the near future. 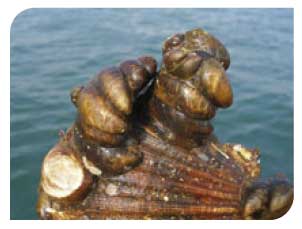 Sargassum muticum, (wireweed), is an invasive non-native brown alga originally from Japan but now found extensively in Europe and North America. It is a fast-growing species able to form dense stands where conditions suit and by virtue of its life-history traits, is ideally suited to spread rapidly once established in a new region. Fronds of the alga readily become detached and can then disperse via natural drift. Crucially, these fronds can remain reproductively active for several weeks enabling dispersal over a wide area. S. muticum was first recorded in the UK in 1973 but did not reach Scotland until 2004 when it was found in Loch Ryan. It has subsequently spread up the west coast of Scotland. 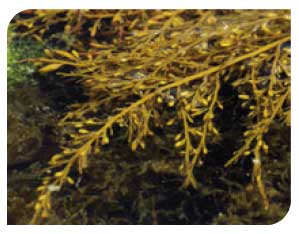 Didemnum vexillum (carpet sea squirt) was discovered in the Firth of Clyde in 2009. This fast-growing colonial sea squirt has the potential to cause significant ecological and commercial impacts, based on experience in North America, New Zealand and several European countries. Carpet sea squirts are fouling organisms with a prodigious capacity to form dense and extensive growths on vessels' hulls, marina pontoons, ropes and aquaculture equipment. Their translocation is principally associated with vessel movements. Work is underway to try to eradicate the species before it is able to spread more widely. 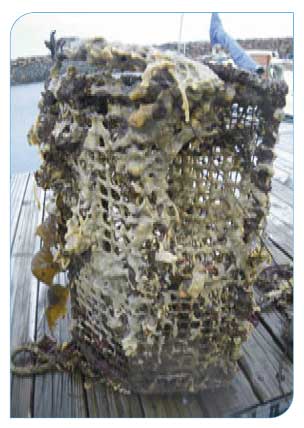