The intertidal sedimentary coastline represents around 50% of the total Scottish coastline. This includes habitats of mobile shingle and gravel, sand and mud or combinations of these, as well as vascular plant communities in the upper shore that form saltmarshes. In some places the sediments are overgrown by biogenic reefs of blue mussels.

Intertidal sediments support communities that are tolerant of exposure to air and variable temperatures and salinities, particularly the expansive mudflats and sandflats found in estuaries. These habitats support communities of animals that are typically species poor, but highly productive. They comprise burrowing worms, crustaceans, bivalve molluscs and echinoderms.

On the more exposed stretches of coast, especially up the east coast, around Orkney and the more open coastal areas of the west coast, the shores comprise clean, relatively coarse grained sand. In slightly more sheltered areas the shores comprise muddy, finer-grained sands. The more mobile the sand the more impoverished the fauna. Muddy sands in contrast are more species rich, supporting communities of amphipods, polychaetes and bivalve molluscs such as tellins and cockles. In some places where there are large spring tides it is also possible to find razor shell beds at extreme low water. Cockles are also sometimes harvested commercially although with recent increased mechanisation this is not always biologically sustainable. Both cockles and razor shells (known as 'spoots' in Orkney) are also harvested at much smaller scales by local people for personal consumption. The expansive sandy beaches of the east coast in particular, e.g. the Dornoch Firth and Tentsmuir, are favoured places for harbour and grey seals to haul out. The wide expanses of sand provide them with a degree of security and an easy escape route to the sea if disturbed. Many are areas of outstanding beauty and can be of considerable importance for recreation.

Sandflats are sensitive to physical disturbance, changes in wave regimes, sea-level rise and pollution as well as fisheries and various damaging recreational activities. 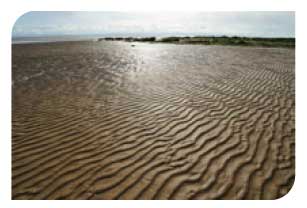 Mudflats - Skinflats - Firth of Forth 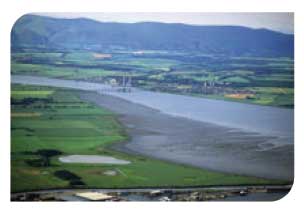 Mudflats are found in the most sheltered areas, within the upper reaches of estuaries, sea lochs and voes. The sediments are finer (silt and clay) and have a high organic content. The resultant high microbial activity can result in an anoxic layer forming close to the surface. Fully marine mudflats are dominated by burrowing polychaete worms, such as lugworms, bivalve molluscs (e.g. Baltic tellin) and mud shrimps. The upper estuaries, where there is reduced salinity, are dominated by oligochaete worms. Found all round the Scottish coast, some of the most notable examples are at Montrose Bay, the Firth of Tay, the Firth of Forth, the Inner Moray Firth and the Cromarty Firth. Mudflats are much undervalued because they tend not to be seen to be useful for recreation or other activities, yet they are vital habitat. They provide a natural sea defence by absorbing wave energy and are an important sink for organic material. They also are an important habitat for many juvenile fish including commercial species such as plaice and a vital habitat for thousands of wintering waders and wildfowl.

Beds of the dwarf eelgrass Zostera noltii are found on the mid and upper shore in muddy sand or sandy mud on wave-sheltered coasts. This habitat is sparsely distributed around Scotland but is present at various sites in the Moray Firth, Firth of Tay, Shetland and the west coast and Western Isles. Scotland has about 20% of the north-west European beds and the Cromarty Firth supports the largest bed known in the UK. The eelgrass roots serve to stabilise and bind the underlying sediment and support a community of polychaete worms, mud shrimps, mud snails, shore crabs and bivalves including the edible cockle ( Cerastoderma edule).

Seagrass beds are sensitive to suction dredging for cockles and to bait digging as well as a range of coastal developments. There have been significant declines in recent years and UK seagrass populations are currently considered as degraded.

Blue mussels forming dense beds or reefs can be found typically in the more sheltered firths and bays. The dense aggregations of mussels form a complex three-dimensional matrix held together by byssus threads that stabilise the sediments beneath. It is often so dense that the anoxic layer reaches the surface of the sediments. The mussels provide a hard substrate on which other animals and plants can attach. Many, such as barnacles, dog whelks, sea squirts and scavengers such as starfish and crabs, would not otherwise be able to survive on the bare muddy surface. Seaweeds also use the mussel shells as attachment points. These beds occur around Scotland with the majority on the west coast and in the Firth of Forth and the Moray Firth.

A particular form of mussel bed comprising high densities of juvenile blue mussels on pebbles, gravel and sand forming a thin bed with the fan worm ( Fabricia sabella), along with other bivalve molluscs and worms, is found exclusively in the Dornoch and Moray Firths.

Some beds are very well and long established, others are more ephemeral, but all are important foraging areas for waders and eider ducks.

The native oyster is typically found attached to rocks or other shells on muddy substratum in estuaries and other coastal habitats. These are found along the west coast, in the Hebrides and Shetland. Specimens have been recently discovered in the Firth of Forth where there was once a highly productive fishery before disappearing in the 1950s. Given the recent nature of this discovery it is not shown on this map.

Native oyster beds were once widespread. Dense beds of oysters once formed reefs that stabilised the underlying sediments and provided a hard substrate for a range of other animals such as sea squirts, sponges, sea slugs and small seaweeds. They are now considered to be nationally rare with only scattered occurrences on the west coast, most notably lochs Ryan, Sween and Scridain. 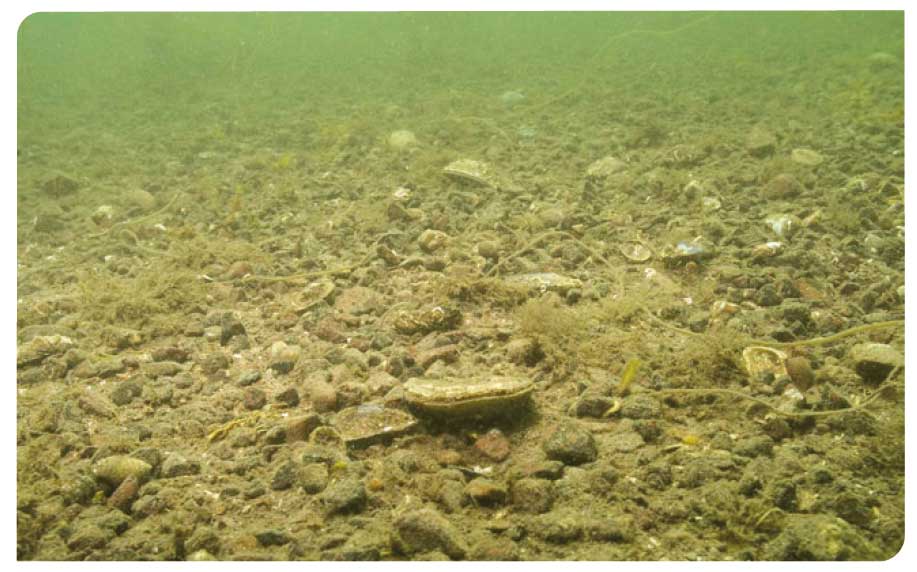