This chapter brings together information on the Scottish fleet structure, fishing effort by the Scottish fleet, and the number of fishermen employed in Scotland. A summary of how the UK fleet is regulated is provided to assist interpretation of the statistics.

2.1 Regulation of the UK fleet

UK fishing vessels engaged in commercial sea fishing are required by law to be registered with the Registry of Shipping and Seamen ( RSS), part of the Maritime and Coastguard Agency. To fish commercially, fishing vessels must also have a licence which specifies conditions that must be adhered to when fishing activity is being pursued. For the purpose of this statistical bulletin, active vessels are those which are both registered and licensed as of 31st December of the year of reference. Scottish based vessels are those registered to a port in Scotland licensed at and administered by a Scottish district.

UK fishing vessel licences authorise the sea areas in which a vessel can fish and the species of fish that can be retained on-board. Restrictive licensing was introduced in 1983 following agreement of the Common Fisheries Policy ( CFP) by the European Commission and has been used as the main tool to control UK fishing capacity to meet the European Union regulations for sustainable fisheries management. Initially, the licensing regime only covered vessels of over ten metres registered length and fishing for a number of designated species in specific areas. The coverage of licences has progressively extended over the years to cover all species if fished commercially and both the over ten metre fleet and ten metres and under fleet.

The capacity of fishing vessels in terms of vessel tonnage and power is also controlled through licences. With a finite number of licences in existence and no new licences made available, this places a ceiling on the total number and capacity of vessels in the UK fishing fleet. In order to licence new vessels, fishermen must acquire one or more existing licences from other previously licensed vessels. When licences are transferred, or aggregated to form a larger licence unit, capacity penalties are applied. These capacity penalties together with the restricted number of licences on issue form a mechanism resulting in reductions in the capacity of the UK fleet.

2.2 Size of the Scottish fleet

2.2.1 Size of the Scottish fleet by length

As well as providing figures for the number, capacity and power of the over ten metre and ten metre and under fleets, figures are given for revised length categories. The revisions to the length categories aim to reflect length categorisation used in specific regulation and licensing conditions. The current quota and effort regulations make a distinction between the ten metre and under, and over ten metre fleets, while the electronic reporting and recording system ( ERS), introduced in 2010, has a staggered adoption based on vessel length. The ERS adoption length groups are; vessels of 24m and over, 15-24m and 12-15m. An additional categorisation used for 24m and over vessels is 24m-40m, and over 40m, to align with the length categories used in the widely recognised Seafish fleet segmentation criteria.

2.2.3 Size of the Scottish fleet by administration district

2.2.4 Size of the Scottish fleet by fishing method

The ten metre and under fleet is dominated by vessels using creels to fish, namely traps in the form of cages or baskets, typically baited and used to target shellfish species. In 2014, 87 per cent of the 1,447 ten metre and under vessels were creel fishing vessels. Of the 583 over ten metre vessels, 63 per cent were shellfish vessels whilst 33 per cent were demersal. Only 21 vessels were pelagic, 95 per cent of which were over 40 metres in length. Creel fishing vessels and Nephrops trawlers dominate the over ten metre shellfish group, whilst trawlers dominate the demersal group. Of the pelagic vessels, 19 are pelagic trawlers and the remaining two are purse seiners (Table 2.4, 2.5 and 2.6).

Figure 2.1 Number of vessels in the Scottish fleet by district: 2014. 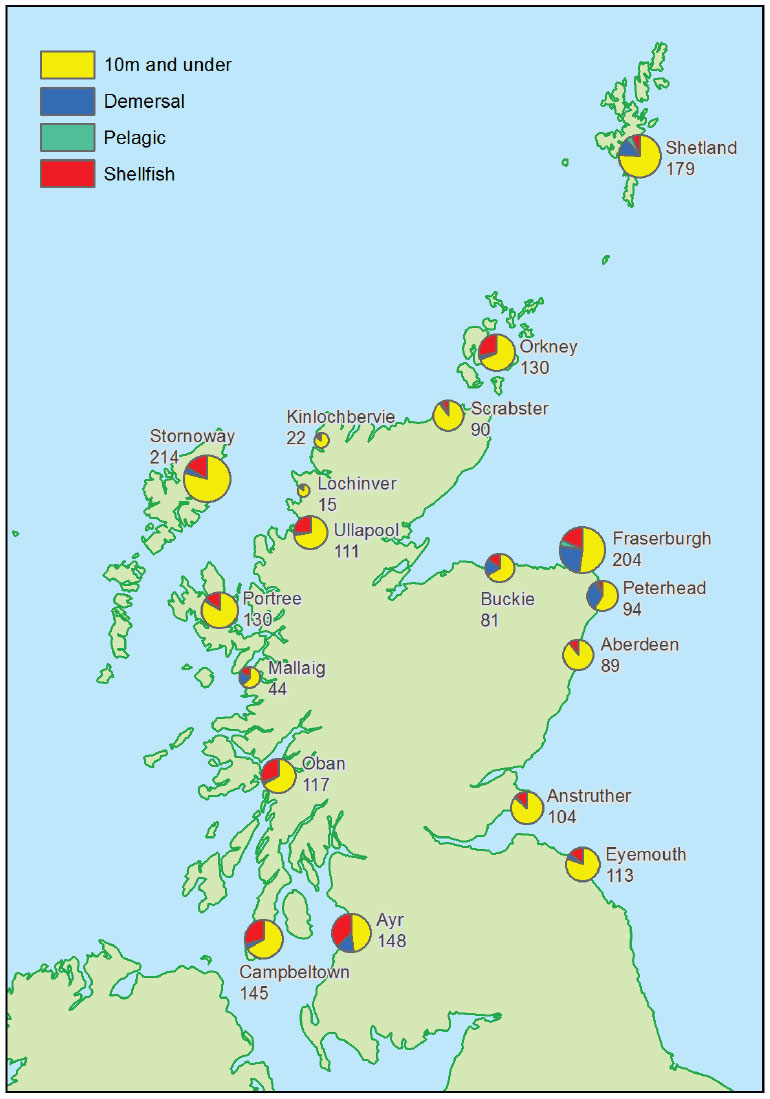 2.3 Effort in the Cod Recovery Zone

The Cod Recovery Zone ( CRZ) comprises of sea areas in which restrictions exist on fishing effort by vessels over ten metres using certain regulated gears. A map of the areas covered by the CRZ is given in Annex 6. These measures aim to reduce cod mortality and encourage recovery of the vulnerable cod stocks. Introduced in February 2003, the CRZ covered specified gears that catch considerable amounts of cod in the North Sea and the West of Scotland. The regime was expanded in 2004 to include the Irish Sea. Eight regulated gears were specified, as detailed in the glossary, and the effort of Scottish vessels using these regulated gears are presented in Table 2.7.a. Please note that the figures are presented for the calendar year although the annual effort control measures cover a twelve month period from 1 February to 31 January.

In 2014, 4,796 fishermen were employed on Scottish based vessels, representing 0.2 per cent of the total Scottish labour force. The number of fishermen employed on Scottish vessels decreased by four per cent (196 persons) from 2013 to 2014 (Table 2.8 and Chart 2.4). In addition to regularly and irregularly employed fishermen, Scotland has a small number of crofters that engage in commercial fishing. A crofter is a person who occupies and works a small land-holding known as a croft and operates a system of small-scale subsistence farming. There were 53 crofters engaged in commercial fishing in 2014, the same number as there was in 2013.