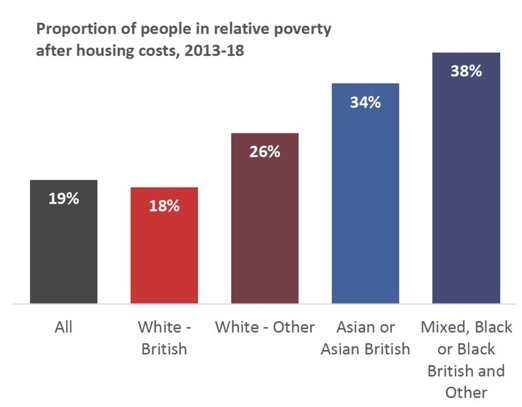 In 2013-18, people from minority ethnic (non-white) groups are more likely to be in relative poverty after housing costs compared to those from the 'White - British' group.

Ethnicity data relates to all people in a household and is based on the ethnicity of the adult with the highest income.

The above chart shows an ethnicity breakdown based on an average of data from the past five financial years. This provides a reasonably detailed breakdown, whilst still using relatively recent data. A more detailed ethnicity breakdown using ten years of data was previously published: www.gov.scot/Topics/Statistics/Browse/Social-Welfare/IncomePoverty/povertytable

Due to the small sample sizes for some of the ethnic groups, the measurement uncertainty will be fairly large. A time series hasn’t been produced for poverty rates by ethnicity as this uncertainty in the data will obscure any long-term trends.