Chart 1. Relative poverty rate for all individuals continues to rise 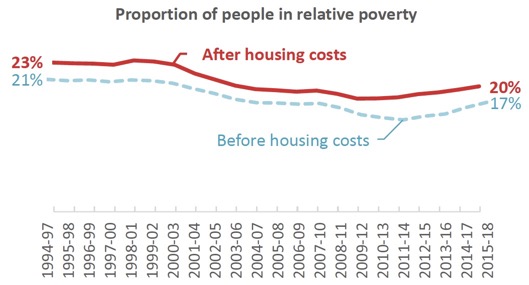 Relative poverty is a measure of whether the income of the poorest households are keeping pace with middle income households across the UK. 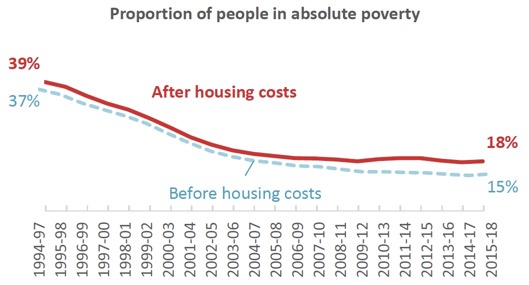 It is estimated that 18% of Scotland’s population (930,000 people each year) were living in absolute poverty after housing costs in 2015-18. This compares to 17% (910,000 people) in the previous period. After a long decline since the beginning of this time series in the mid-nineties, absolute poverty rates have stagnated since 2006-09.

Before housing costs, 15% of Scotland’s population (780,000 people each year) were in absolute poverty. The trend is similar to the after housing costs measure, although the downward trend started to stagnate a few years later.

The gap between the before and after housing costs measure had widened in recent years, but remained steady in 2015-18.

Absolute poverty is a measure of whether the incomes of the poorest households are keeping pace with inflation, and is based on the poverty threshold in 2010/11.