Income is measured at a household level, which makes it difficult to measure the poverty rate for individual adults living with a partner. For the 60% of women and men who live in couple families (with or without dependent children), both adults will either be above or below the poverty threshold. In the analysis below, we therefore exclude adults living with partners. 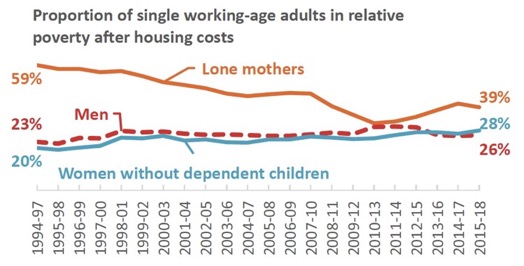 Until 2010-13, the gap in poverty rates between lone mothers and other single working-age adults had narrowed, but in recent years it widened again.

The increased poverty rate for single men from 2010-13 through to 2012-15 is due to an unusually high poverty rate in the sample in one of the years, and might not entirely reflect a genuine increase.