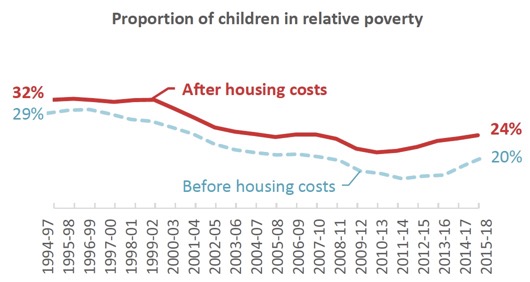 Before housing costs, it is estimated that 20% of children (200,000 children each year) were in relative poverty, compared to 19% previously.

Child poverty rates had been falling for many years, but began to rise again since 2010-13 (after housing costs) and 2011-14 (before housing costs).

The Child Poverty (Scotland) Act 2017 requires us to report annually on a number of child poverty measures. The latest single-year estimates can be found in the associated tables. 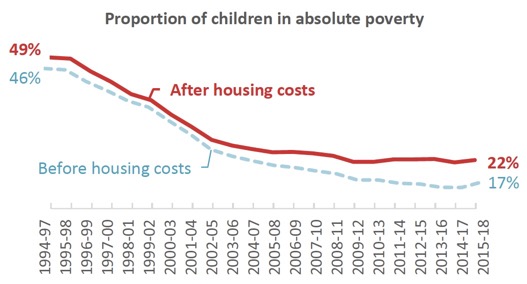 Absolute child poverty after housing costs remained at 22% (220,000 children each year) after a long, slow decrease.

Before housing costs, absolute child poverty was at 17% (170,000 children each year) compared to 15% in the previous period. 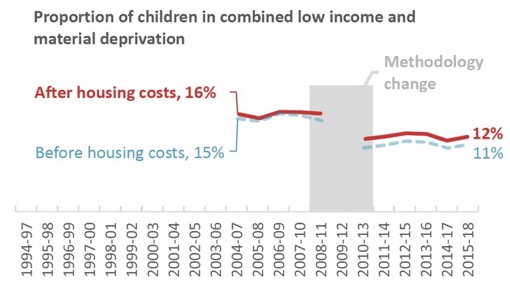 Combined low income and child material deprivation is an additional way of measuring living standards and refers to the inability of households to afford basic goods and activities that are seen as necessities in society.

More detail on this can be found in the Annex.

Material deprivation data has been collected since 2004. Due to a change in the methodology, it is not possible to compare the most recent years with years before 2010-13. The break in the time series indicates this change.

Chart 6. In-work poverty for children may be stabilising 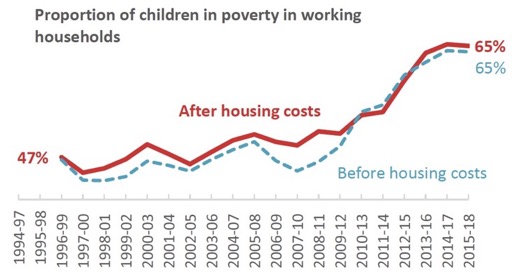 It is estimated that in 2015-18, 65% of children in relative poverty after housing costs (160,000 children each year) were living in working households. This compares to 66% in the previous period. Before housing costs, 65% of children in poverty (130,000 children) were living in working households, the same proportion as in the previous period.

The terms ‘working’ and ‘in-work poverty’ here refer to paid employment only. In-work poverty refers to people living in households where at least one member of the household is in either full or part-time paid work, but where the household income is below the relative poverty threshold.