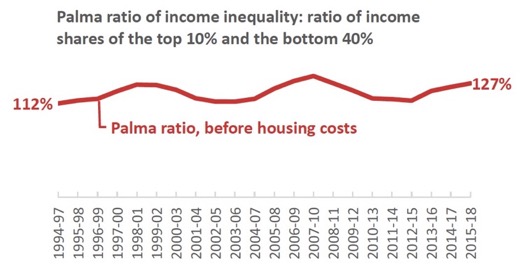 This chart shows the ratio of total income received by the top ten percent of the population divided by the total income of the bottom forty percent of the population (expressed as a percentage) over time. This measure of how equally income is distributed across the population is known as the “Palma ratio” or “S90/S40 ratio”. Palma is used internationally to estimate the extent of inequality between those at the top of the income distribution and those at the bottom. The Palma ratio is usually calculated from income before housing costs.

Income inequality had been fluctuating since the beginning of this data collection in the mid-nineties, and, after the most recent low point in 2012-15, has been steadily increasing.

Additional income inequality data, including the Gini coefficient and income decile shares, is available in the associated tables.