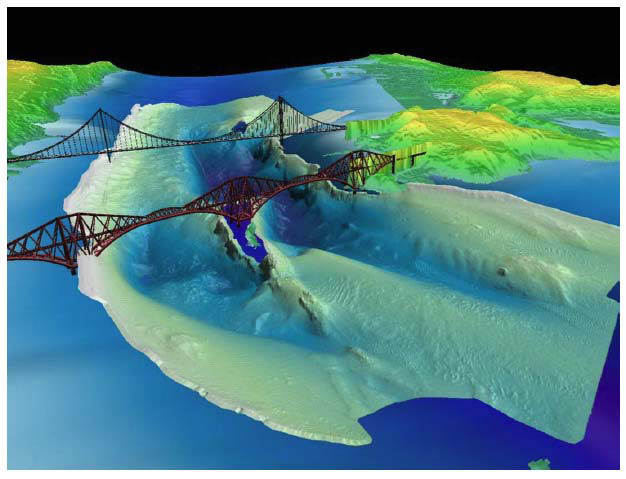 High-resolution information using multi-beam echo-sounders has been acquired from areas of the seabed around Scotland by science and marine management organisations and the commercial sector. The method principally collects depth information that reveals the shape of the sea-floor, but it can also provide acoustic images of the physical properties of the seabed that can be used to compile detailed and accurate geological maps of the sea-floor. The British Geological Survey has used multi-beam technology in most of their recent surveys, an example of which is shown in the enclosed CD.

The data shown were collected from a small area of the Firth of Forth surrounding the road and rail bridges. Using 'fly-through' software, the seabed can be studied in detail to identify geological features such as the igneous rocks that crop out at the sea-floor. The images clearly show how designers used these rock outcrops to provide a solid foundation for the construction of both bridges. The deep channel (up to 65 metres in depth) in the centre of the firth has been carved out by ice as it moved across softer sediments during the last glacial period to affect the region (more than 10,000 years ago). Material that was transported by the glaciers form ridges of sediment, or terminal moraines, at the point at which the ice stopped before melting. These moraines can be seen to the seaward side of the Forth Bridge. Recent movement of sediment by currents and tides is apparent in areas of the seabed with ripple marks. In areas with steep slopes or where sediment has been disturbed by human activity, evidence of submarine landslides can be seen. Other evidence of man's use of the marine environment, such as shipwrecks, is clearly seen on the sonar images.

As well as providing detailed information of value to marine engineers, by working in collaboration with biologists, these types of data can be used to map the habitats of marine species in the seas around Scotland. Such information can be used to inform managers of the fishing and aquaculture industries.