Viral haemorrhagic septicaemia (VHS) is historically a disease of farmed rainbow trout (Oncorhynchus mykiss) in fresh water in continental Europe. However, disease outbreaks in the marine environment have been recorded in cultured turbot in Germany, Scotland and Ireland, and in cultured rainbow trout in Sweden. VHS causes high mortalities and seriously affects production. 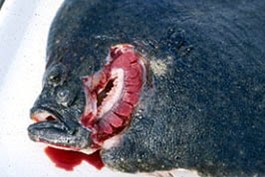 Typical outbreaks occur in spring and autumn at temperatures generally below 14°C, resulting in an acute to chronic disease. All ages of fish can be affected although young fish are more susceptible. Species of fish in which clinical disease has been recorded include salmonids, grayling (Thymallus thymallus), whitefish (Coregonus spp), pike (Esox lucius) and turbot (Scopthalmus maximus). Recent research now points to the widespread distribution of the VHS virus in a number of wild fish species in the European marine environment.

A wide range of disease signs is possible. These include pale gills, dark body colour, ascites (fluid in the body cavity), exophthalmos (bulging eye), and in some cases an intermittent period of erratic spiralling behaviour and rapid respiration. Haemorrhage is often evident in the eyes and skin, and also in the viscera including the intestinal submucosa and skeletal muscle. In many fish a less dramatic pathology is noted. A presumptive diagnosis of VHS can be made if mortality among susceptible groups is high, particularly fingerling or yearling rainbow trout, and most of the typical major signs and behavioural changes are present.

The causative agent of VHS is a novirhabdovirus. Confirmed diagnosis can be achieved by virus isolation followed by enzyme linked immuno sorbant assay (ELISA) or indirect fluorescent antibody test (IFAT).

As with many viral diseases of fish, there is no specific treatment or cure for VHS. The virus can be transmitted by diseased fish, by non-symptomatic carriers, and can be found in gonadal fluids of broodstock. Birds, blood-sucking parasites and equipment may also be a source of infection.

VHS is a notifiable disease within Great Britain and is listed as a non-exotic disease under Council Directive 2006/88/EC. Although VHS is present in Europe, Great Britain is an approved zone for this disease, and to maintain this disease-free status all farms holding susceptible species of fish are routinely inspected for clinical signs of the disease. The frequency of these inspections depends on the risk category of the farm which is determined by assessing the risk of introducing disease from other sources onto the farm either by fish movement or connection to other sites via water supply etc. High risk sites are inspected once every year, medium risk sites once every two years and low risk sites once every three years.