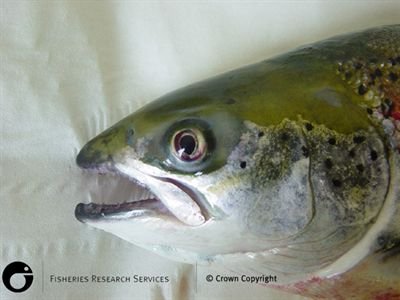 Cardiomyopathy syndrome (CMS) is an economically important disease of adult Atlantic salmon in sea water. The first confirmed outbreaks were reported from coastal sites in Norway in the mid 1980's, but now reported from most fish farming areas in Norway. The first case in Scotland was reported in 2000 and subsequently from fish from the Faeroe Islands, Denmark. CMS has been diagnosed in farmed and wild Atlantic salmon and typically, the disease affects adult fish after 12 to 18 months in sea water. The condition is transmittable and attributable to a viral aetiology. 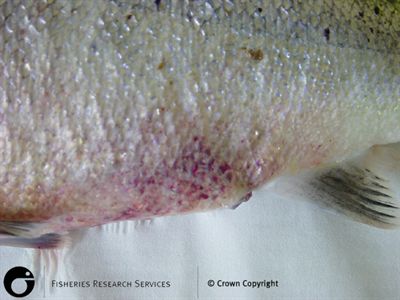 Fish in the later stages of the disease are often in good body condition, showing few clinical signs before death. Affected fish may go off feed and swim sluggishly; developing skin haemorrhage and oedema, raised scales, exophthalmia and ascites. Typical findings at necropsy are fibrinous peritonitis, ascitic fluid, and blood clots on the dorsocranial surface of the liver and surrounding the heart, or within the heart with subsequent cardiac tamponade.

Diagnosis is based on the characteristic gross and histopathological findings. Characteristic lesions are found in the atrium myocardium and ventricle spongiosum, and comprise epicarditis, muscular degeneration, proliferation of the endocardial cells with macrophage infiltration and lymphocytes subendocardially and moderate to marked thickening of myofibres with loss of striation within the sarcolemma. Focal necrosis in the hepatic parenchyma may also occur with hyalinization and occasional nuclear enlargement, extending from the outer compact layer of the myocardium moderately deeply into the spongy layer. Within some sections of liver, a mild, fibrosis of the central vein can be observed.