Epitheliocystis was first described in the 1920's in Germany under the name mucophilosis, though now recognised worldwide. This is usually a benign infection although proliferative lesions have also been reported. Chlyamidia are accepted as the causal agent of epitheliocystis, however the true taxonomic status of this organism remains unknown. Epitheliocystis occurs in farmed and wild fish in fresh water and from the marine environment. Mortalities have been reported in Atlantic salmon, lake trout and rainbow trout.

Infection may cause severe mortalities among juvenile fish in nurseries. In lightly infected fish no external signs of infection are recorded and behaviour of the fish is apparently normal. A heavy infection may result in excess mucous production and respiratory distress. Transparent or white cysts may be observed on the gill lamellae and provide a provisional diagnosis of epitheliocystis. 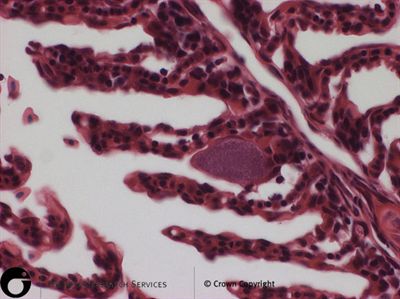 Epitheliocystis infect the epithelial and chloride cells of gills and cause swelling of individual cells. Infection can cause a widespread epithelial hyperplasia that may lead to necrosis with a mild leucocytic response eventually leading to the release of mature cysts. Young branchial cysts are small (10 15 µm) and contain a central inclusion surrounded by a thickened host epithelium. Mature cells (60 400 µm) are surrounded by layers of normal epithelium with remnants of the host cell.