Lepeophtheirus salmonis (sea-lice) is a natural parasite of wild and farmed sea-caged Atlantic salmon ( Salmo salar) culture within Europe. L. salmonis has a circumpolar distribution within the northern hemisphere, where infection of wild fish is generally low but in culture conditions infection rates can be very high. Infection of salmonids by L. salmonis occurs all year with a succession of generations during the year. The greatest number of parasite occur in the late summer and autumn due to an accumulation from successive generations. 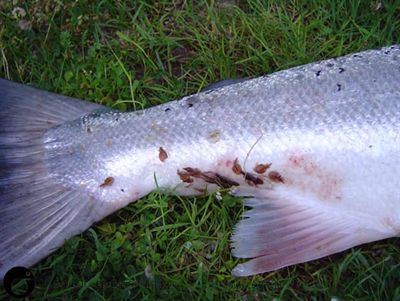 Adult females are generally larger than the males with both adults having a large, rounded, flat cephalothorax. Adult females, 10-18 mm long, have a more prominent genital segment displaying paired eggstrings, up to 2 cm long and containing up to 1,200 eggs, from the posterior end.

The free-living nauplii and copepodids are positively phototatic and infective copepodids swim upwards in response to pressure and infect the host following generation of water flow or mechanical vibration from the host. The copepodids grips the host with clawed antennae which then penetrate the epidermis and dermis and subsequently the anterior end of the cephalothoracic shield is pushed into the epidermis causing it to separate from the basement membrane. A frontal filament then attaches the copepodid to the basement membrane by an adhesive secretion and the larvae moult into the attached chalimus stages. 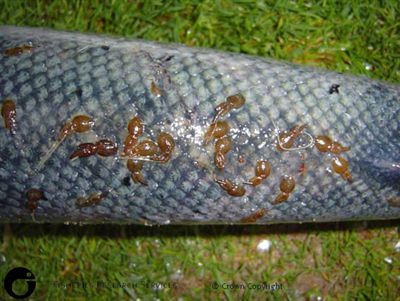 Feeding of L. salmonis results in the observation of whitish spots on the dorsal regions, notably the head and neck region although the base of the dorsal fins is also affected. At higher parasite levels these become skin lesions and then large open wounds. There may be subepidermal haemorrhaging and erosion of the skin to expose the cranial bones, with these wounds being susceptible to secondary bacterial and fungal infections. Oedema, hyperplasia, sloughing of epidermal cells and inflammation are caused by attachement and feeding of pre-adults and adults. Extensive skin damage results in death through osmoregulatory failure although secondary bacterial infection can also cause death.