Red mark syndrome (RMS) was first reported in January 2004 from a farm in Scotland rearing rainbow trout in fresh water. Subsequently in 2005 outbreaks were also recorded in England from the same hatchery as the initial outbreak. Reports indicate that lesions are more severe after grading but decline at water temperatures above 16°C, but generally fish continue to feed and grow normally.

RMS responds to antibiotic treatment (e.g. oxytetracyline) and this suggests an infectious agent could be present. Fish show skin swelling with increased scale loss, followed by a haemorrhagic dermatitis, with elongation of the lesions at 90 degrees to the lateral line. The lesions may develop into 'furuncle-like' areas, but superficially there are no other gross effects. 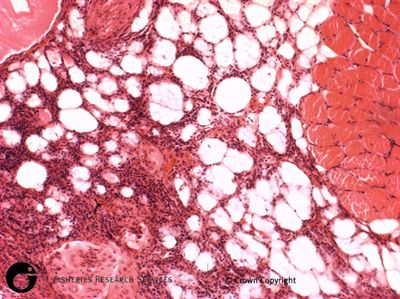 Histologically, a distinct dermatitis is recorded, with increased mucous, mild epidermal hyperplasia and extensive lymphocytic infiltration with other inflammatory cells recorded in the epidermis and around the intramuscular septum. Early lesions are located in the dermis, with lymphocyte infiltration in the stratum spongiosum and around the scale pocket. Later stage lesions result in scale loss and in some case breach of the epidermis.