Reports of wild Atlantic salmon (Salmo salar) returning to Scottish rivers with inflamed, swollen bleeding vents were first received in early June 2007. By the end of the year over 50 rivers in Scotland reported the presence of red vent syndrome with similar observations received from rivers in England and Wales.  The syndrome mainly affects one sea-winter fish (i.e. grilse), both male and female Atlantic salmon and is particularly prevalent among ‘fresh run’ fish.  However, it has also been recorded in two or multiple sea-winter fish as well as ‘stale’ fish which had been in fresh water for many weeks. Few cases of sea trout (S. trutta) have been reported but farmed Atlantic salmon have not been affected by the condition. Apart from the vent, the fish appear to be in good physical condition. Investigations were carried out by Marine Scotland Science (MSS) in an attempt to establish the cause and extent of the problem.

Investigation into the cause

All fish examined by MSS were screened for fish pathogens. The results from a suite of bacteriological, virological and molecular tests were all negative. However, parasites were found both in the body cavity and particularly in the vent region. The parasite is a small round nematode called Anisakis, which can be observed with the naked eye and resembles a watch spring, measures a few millimetres in diameter, but up to 200mm long when uncoiled. 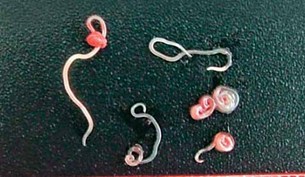 Anasakis larvae were consistently found in the region of the vent of all fish examined and in very high numbers, embedded in the dermal, sub-dermal and muscle tissues within the vent. Microscopically, changes include epidermal erosion, scale loss, encapsulation, severe dermatitis, inflammatory response and haemorrhage, which all contribute towards the appearance of the vent externally.

The very high number of Anisakis larvae within the discrete region of the vent, and the associated tissue reaction correlates with the externally observed ‘red vent’, and is considered to be the most likely causal agent of the Atlantic salmon ‘red vent syndrome’. Otherwise, all of the fish examined showed a good general health status, and there is no evidence of any bacterial, viral or fungal agent. Moreover, all internal organs and tissues other than the vent appeared to be in a normal healthy condition. The presence of Anisakis larvae in wild adult salmon is not novel as the parasite occurs naturally in many fish species. However, the concentration of parasites in the vent tissues is unusual. The impact of the parasite on the fish is not fully known, but after three years of observations, there is no evidence that the condition has either prevented salmon from spawning successfully or led to mortality during their fresh water life/stage. The final natural host of the Anisakis worm are marine mammals such as whales, dolphins or seals. However, the parasite may also affect humans who become infected from eating raw fish (for example, sushi) or fish that is under-cooked.