Proliferative kidney disease (PKD) is recognised as an economically important disease of salmonids in Europe and North America. The causative agent, PKX organism, has been described as Tetracapsuloides bryosalmonae. This disease has been seen in both wild and farmed salmonids including grayling ( Thymallus thymallus) and Arctic charr ( Salvelinus alpinus). 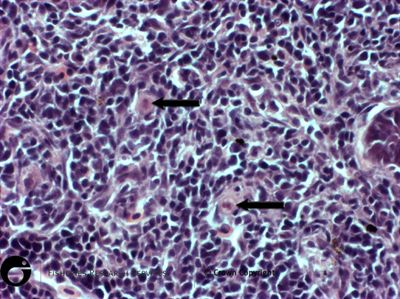 Affected fish appear dark, and may show exophthalmia, pale gills and distended abdomen. The kidney, and to a lesser extent the spleen, are massively enlarged with discrete grey bulbous ridges or nodules. Within the abdomen, swelling due to extensive accumulation of ascitic fluid occurs. Other visceral organs may be pale in colour.

PKD is characterised by haematopoietic hyperplasia and is followed by diffuse and chronic inflammation. The parasites may be surrounded by coalescing whorls of inflammatory cells. Sporogenesis occurs in the renal tubules, resulting in monosporous pseudoplasmodia. The fully formed cryptic spores are ovoid with indistinguishable valves and two spherical polar capsules at the anterior end. Normal renal interstitial tissue is replaced by mild haematopoietic hyperplasia during the initial stages of infection and later by granulomatous tissue with macrophages and mononuclear cells. Developmental stages (sporoblasts) of the parasite may also be recorded in the walls and lumen of the kidney tubules. Extensive haemorrhage can occur in the early acute stages of the disease. The number of nephrons (glomeruli and tubules) and melanomacrophage aggregates are severely reduced and an extensive chronic fibrosis occurs in the later stages of the disease. Throughout the affected tissue, characteristic 'PKX' cells can be found, particularly in the endothelium of the portal vessels. PKX cells may be seen in several other well vascularised organs including the gills, spleen, liver and heart.