In 2017, the real value of mackerel fell by six per cent and tonnage fell five per cent. The real value of herring fell by 46 per cent and tonnage landed by 14 per cent since 2016. The increase in tonnage of pelagic species landed is due to a sharp increase in landings of blue whiting, likely because of a rise in the available quota for this species (28 thousand tonnes up). In 2017, 63 thousand tonnes of blue whiting worth £11 million was landed by Scottish vessels, an increase of 71 per cent in tonnage and 24 per cent in real value. This explains the modest increase in pelagic tonnage landed in spite of a reduction in total value, as blue whiting is largely caught for the low value industrial market and is not landed for human consumption, hence it attracts a lower price at market (£170 per tonne in 2017).

Chart 3. Tonnage of landings by Scottish vessels by species type 2008 to 2017 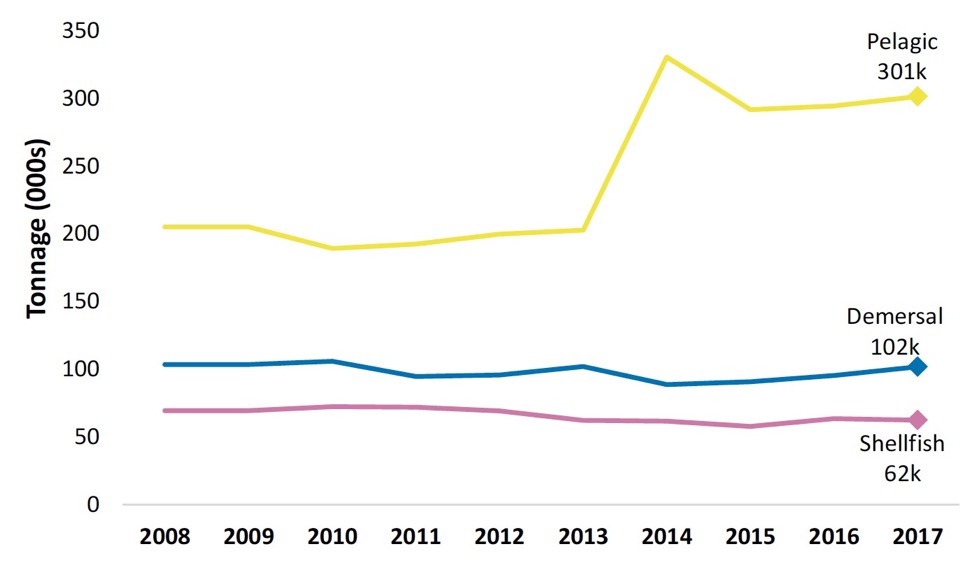 Chart 4. Real value of landings by Scottish vessels by species type 2008 to 2017 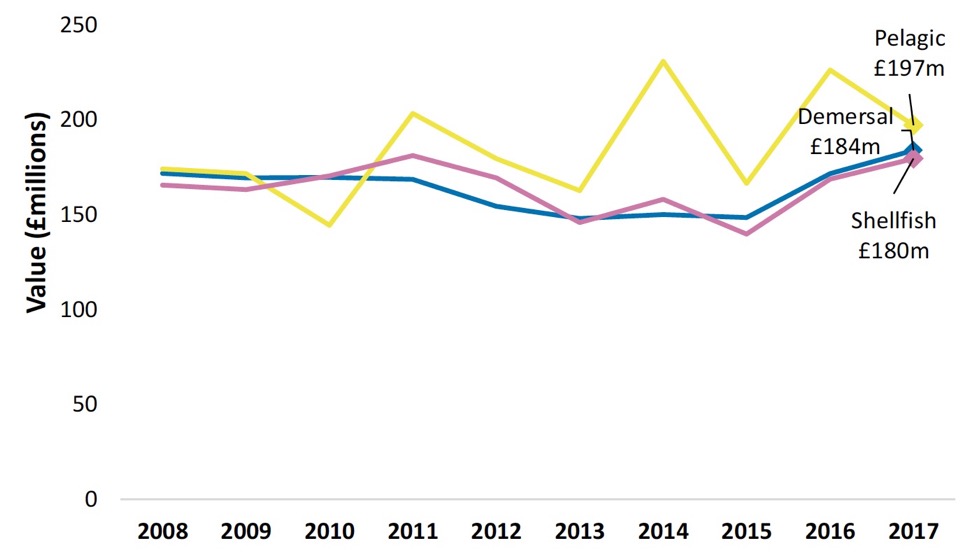 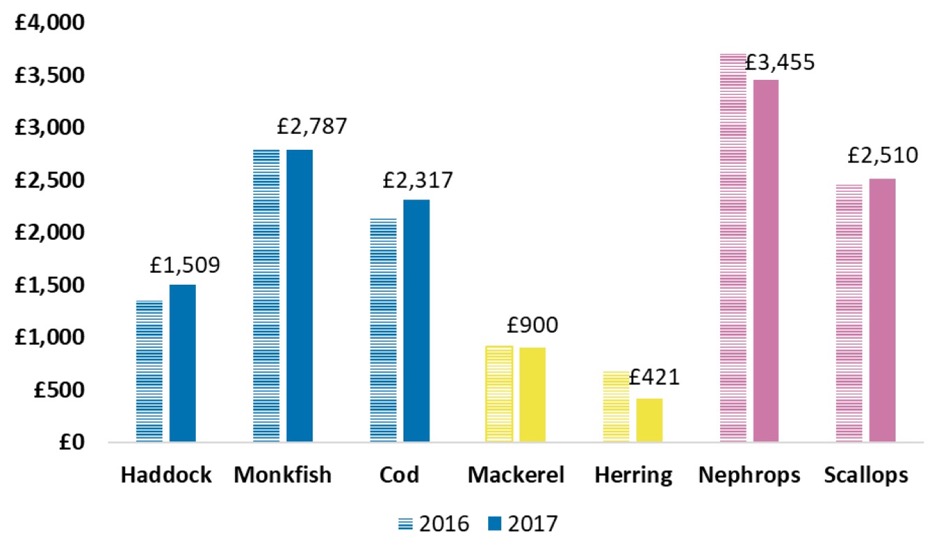 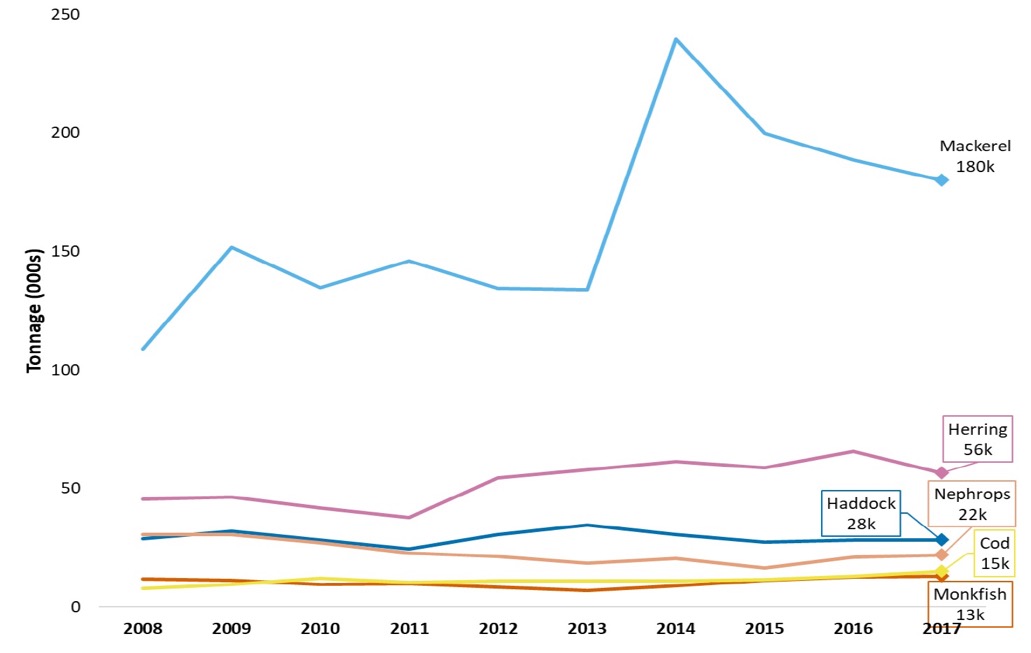 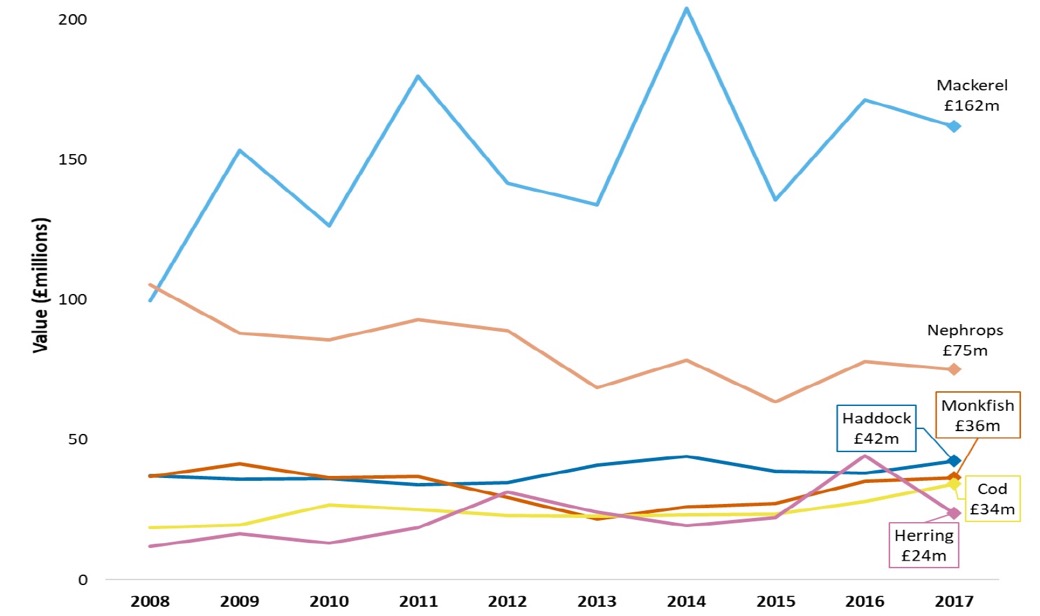 Nearly all of Scottish landings into Norway were of pelagic species. In 2017, 90 per cent of the value of landings into Norway was for mackerel, amounting to 90 thousand tonnes with a value of £80 million. Key countries for demersal landings were the Netherlands and Denmark. Scottish vessels landed 12 thousand tonnes of demersal species abroad with a value of £15 million. Only 850 tonnes of shellfish were landed abroad by Scottish vessels in 2017, mainly into Ireland and the Netherlands. 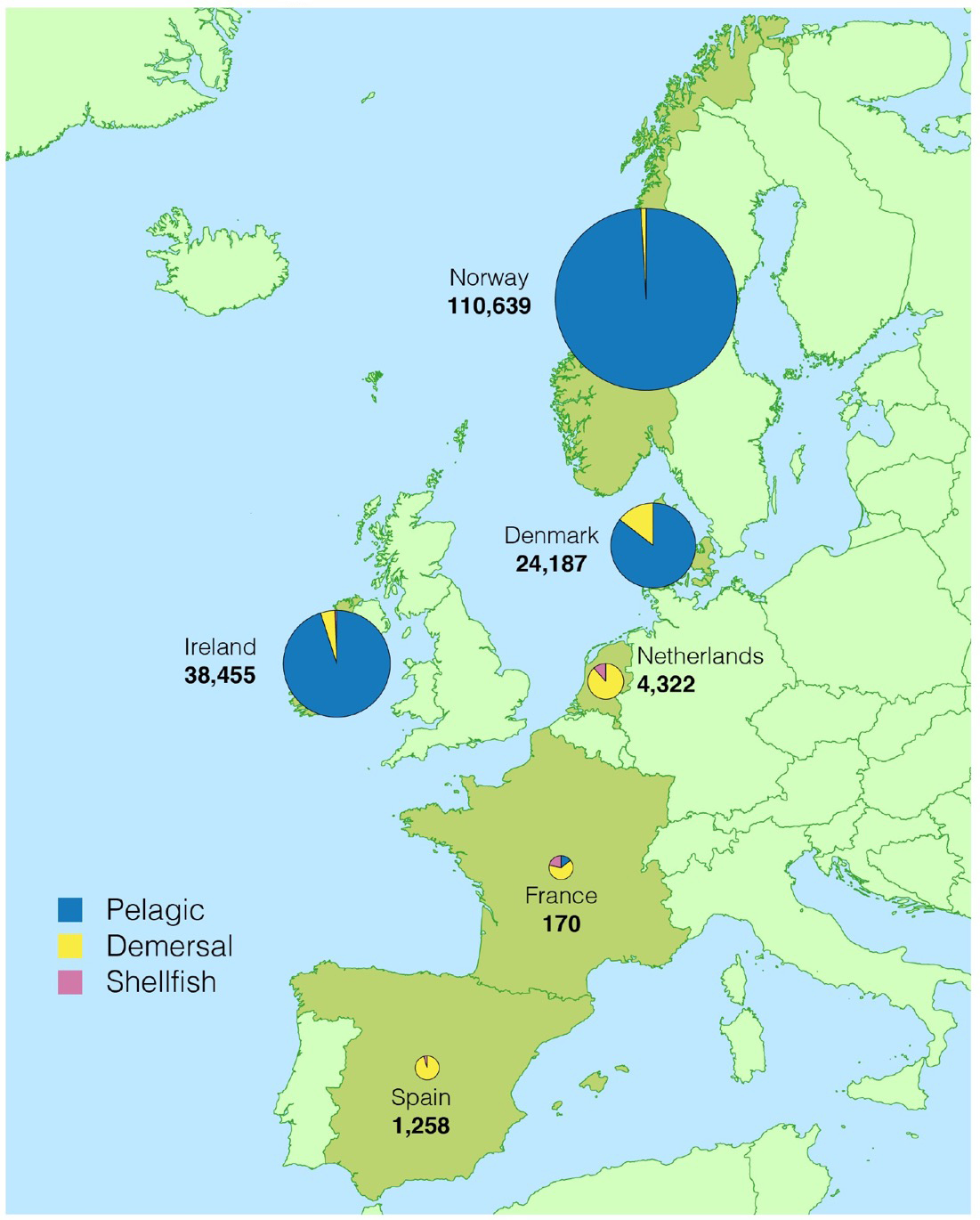 Figure 3. Value of landings abroad by Scottish vessels by country of landing and species type (£’ thousands) 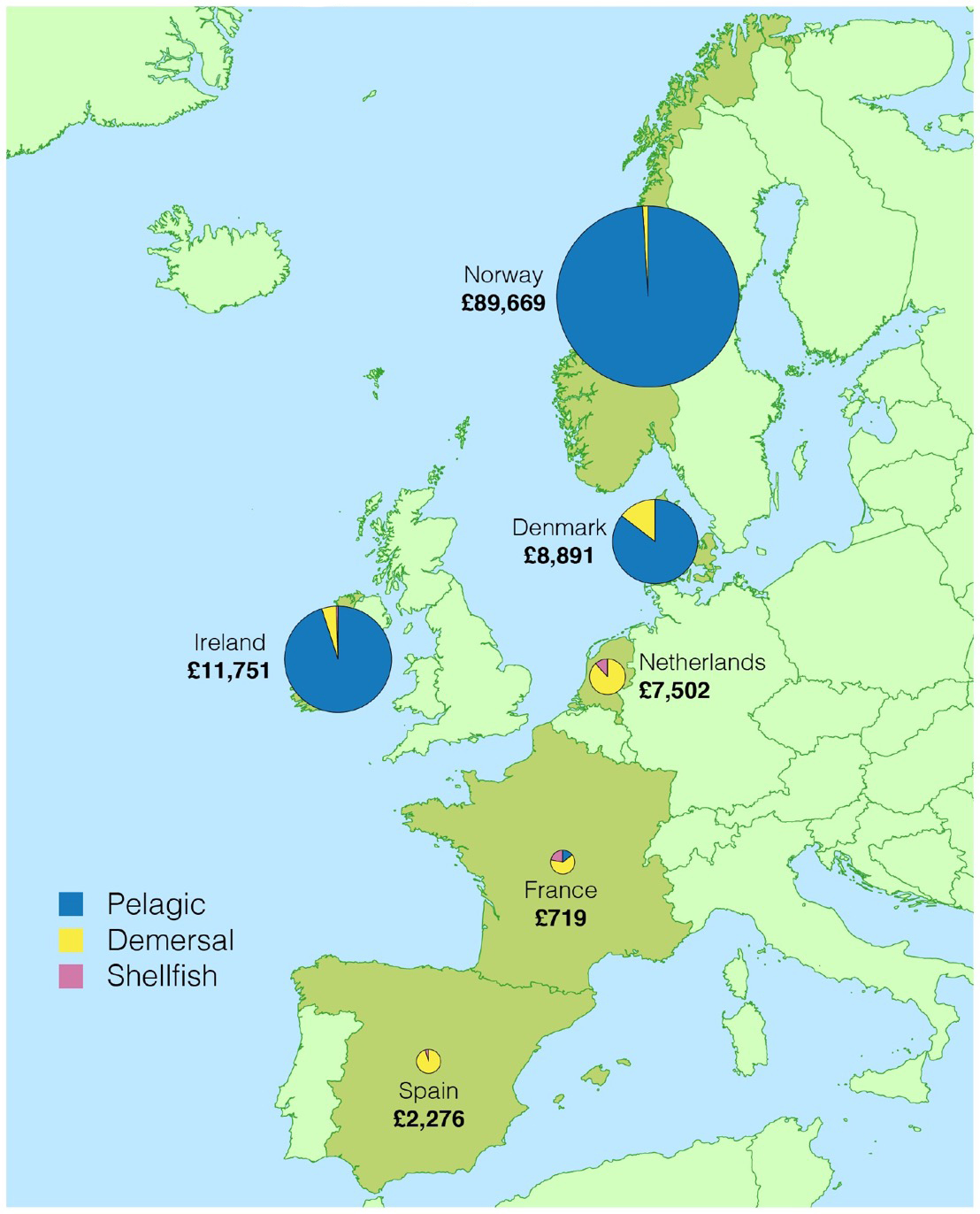 3.3. Landings by area of capture

Scottish vessels are most active in two main ICES Rectangles : the Northern North Sea (ICES division IVa) and the West Coast of Scotland (ICES division VIa) (Figure 2 and Figure 3). In the Northern North Sea (IVa), 215 thousand tonnes of sea fish and shellfish were caught with a value of £275 million, representing 46 per cent of the tonnage and 49 per cent of the value of all landings by Scottish vessels (Table 28). Almost two fifths (38 per cent) of landings by Scottish vessels by tonnage were caught in the West Coast of Scotland (VIa), providing one third (33 per cent) of the total value of all Scottish landings. The rest of Area VII (i.e. not the Irish Sea) accounted for three per cent activity from demersal and less than one per cent of the pelagic and shellfish tonnage. One per cent of the tonnage of all landings was caught in this area.

Figure 4. Tonnage landed by Scottish vessels by area of capture and species type 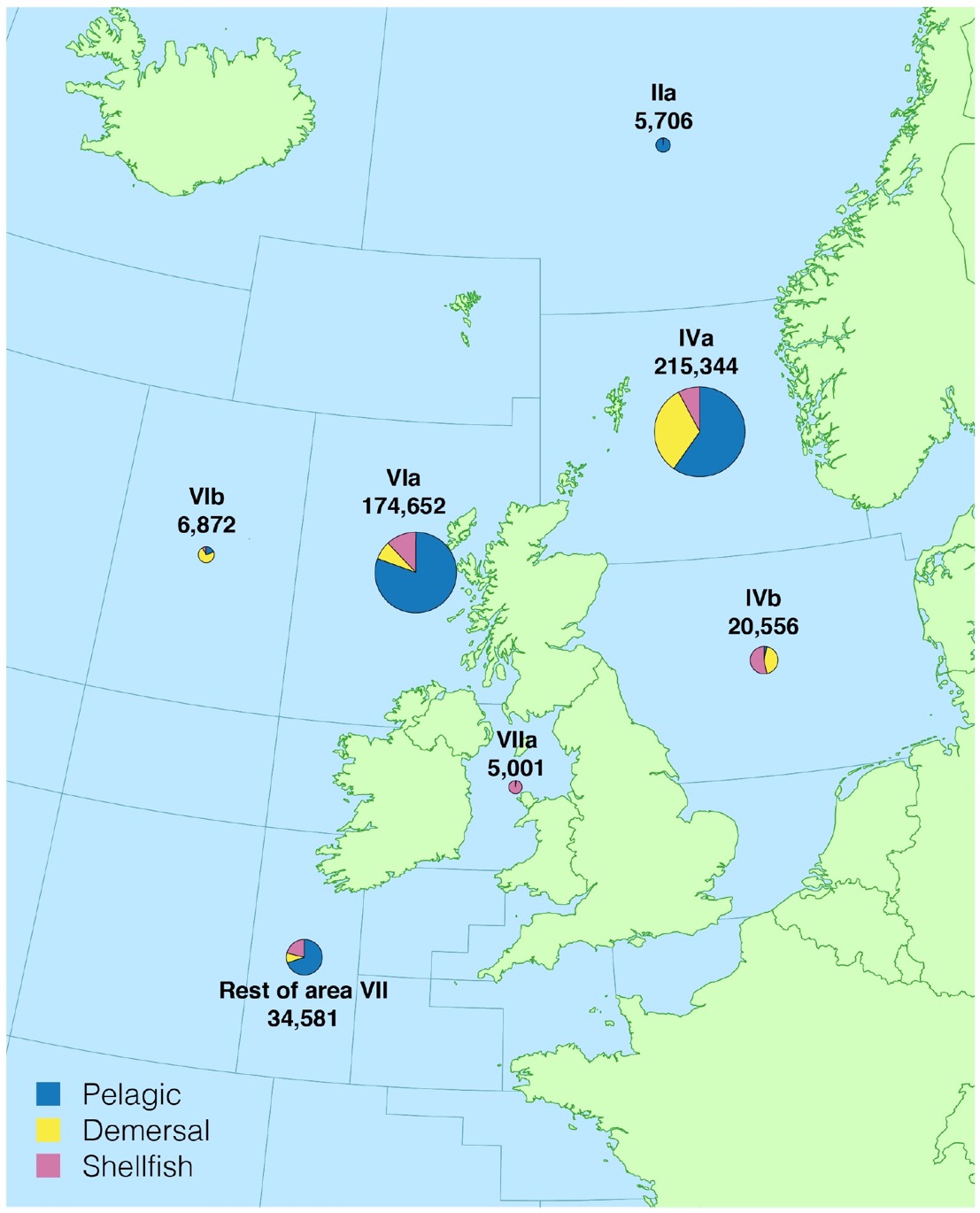 Figure 5. Value of landings by Scottish vessels by area of capture and species type, (£’thousands) 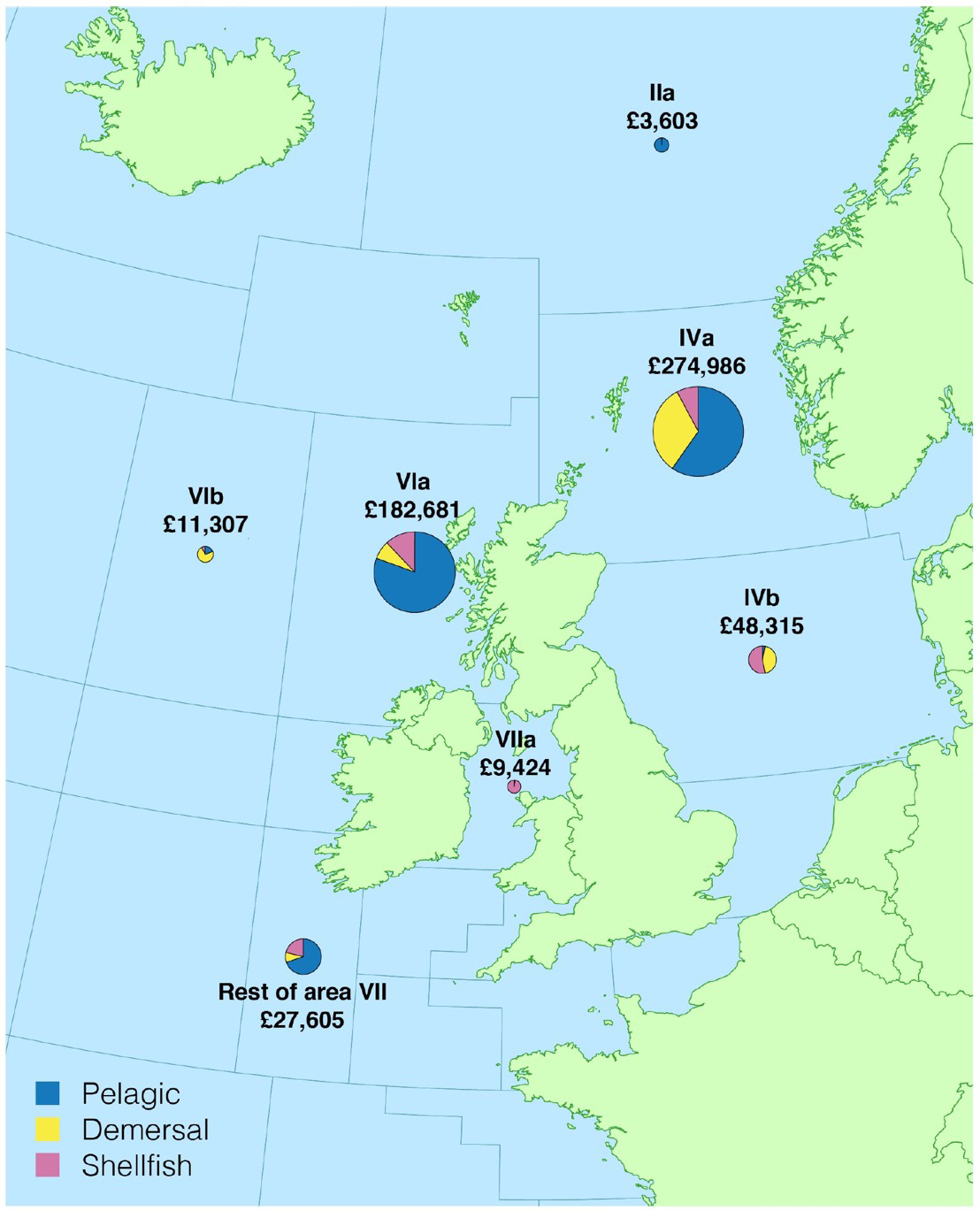 3.4. All landings into Scotland

Figure 6 and Figure 7 show landings by all vessels by species type into the eighteen Scottish port districts (also in Table 29). Landings into the south-west coast and south-east coast were dominated by shellfish, while landings into the north-west coast were mostly demersal and the north-east coast were mostly pelagic landings. The three largest districts in Scotland in terms of total tonnage landed were Peterhead (east coast), Shetland (north) and Fraserburgh (east coast). Peterhead is the single largest fishing port in the UK by tonnage and value landed there.

Figure 6. Tonnage landed into Scotland by all vessels by district and species type, 2017 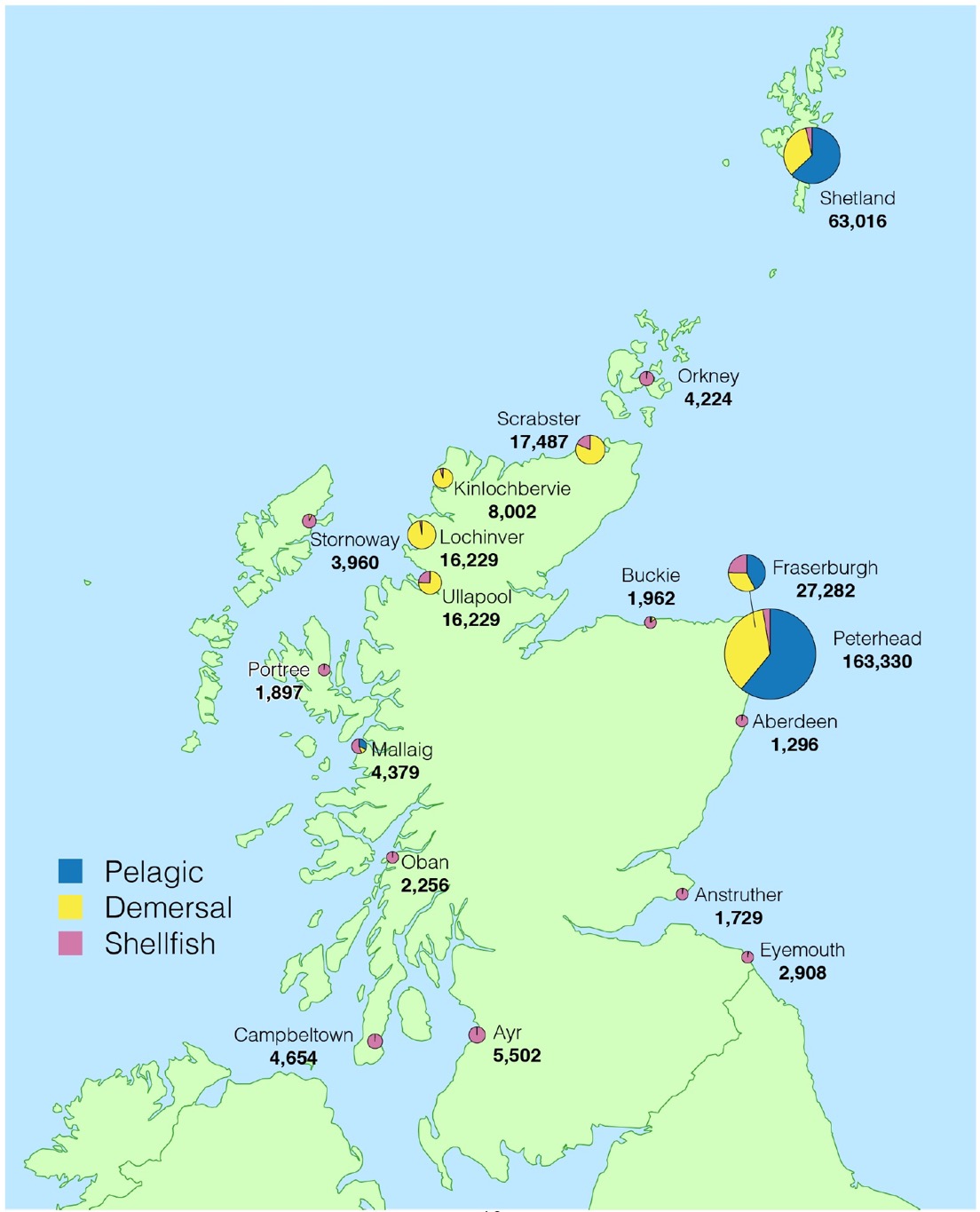 Figure 7. Value of landings into Scotland by all vessels by district by species type (£’thousands), 2017 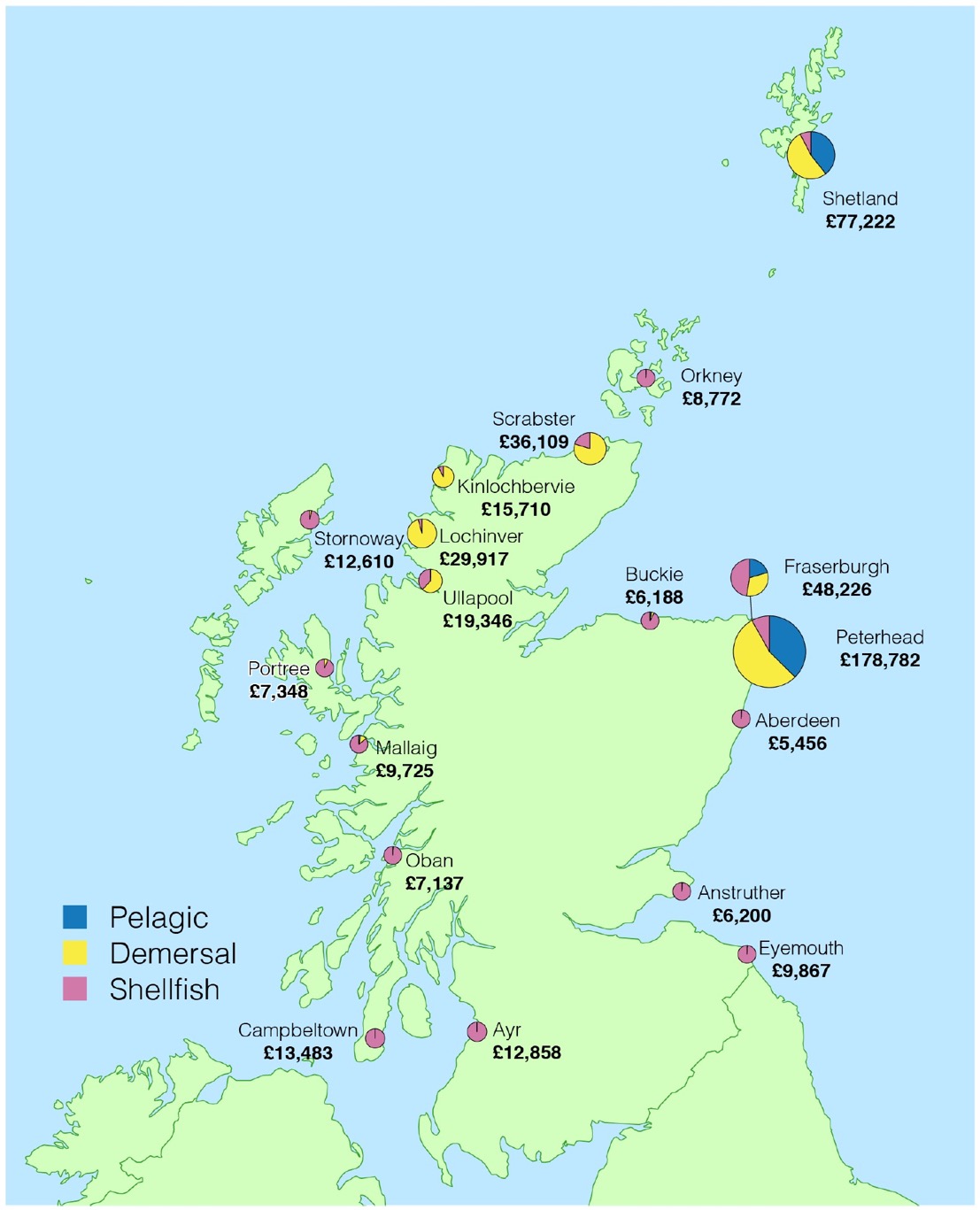 Total Allowable Catches are limits set at international negotiations for individual fish stocks on an annual basis and represent that maximum of each stock that can be caught. Some stocks are managed and fished only by European Union (EU) member states. The TACs for these stocks are set by the European Commission through internal negotiations between EU member states with an interest. Other stocks are managed and shared with non-EU states, and TACs for these are set at separate negotiations with interested parties, particularly Norway, Iceland, the Faroe Islands and the Russian Federation (the ‘Coastal States’). The EU TAC is shared among EU member states based on a number of factors, including each member state’s past catch record. The amounts Table 33 at the UK and at the Scottish Producers Organisations’ (POs) level. Uptake of key commercial quota stocks by tonnage and value landed are presented in Table 34.

Chart 9 compares the quota uptake of key quota stocks (with landings by Scottish vessels in excess of £20 million) for Scottish Producer Organisations (POs) over the last five years in the North Sea and West Coast. In general, Scottish POs had high quota uptake in 2017 for key demersal and pelagic species. Only one stock exceeded quota: West of Scotland mackerel at 101 per cent of quota allocation.[2] 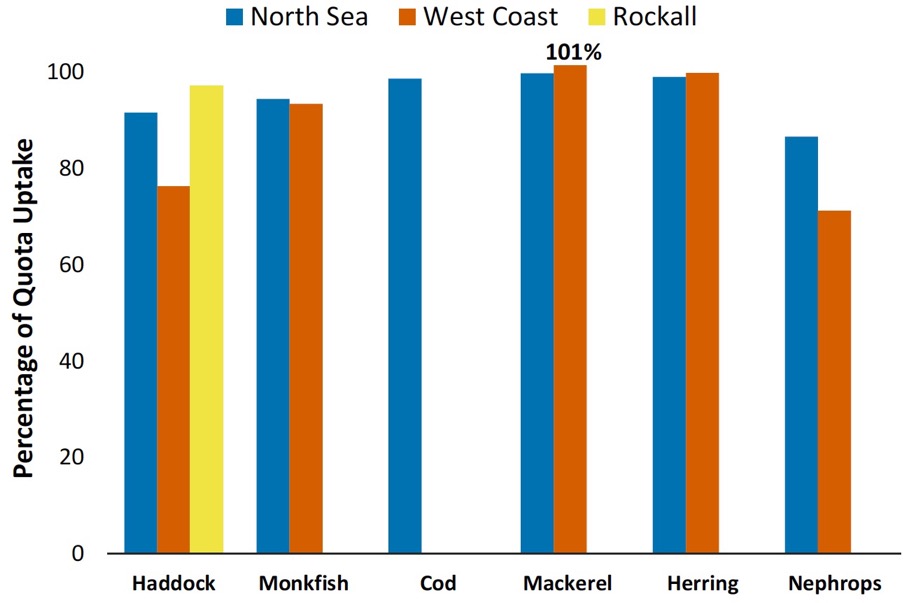