In 2017, 4,799 fishers were working on Scottish based vessels, representing 0.2 per cent of the total Scottish labour force. The number of fishers working on Scottish vessels was consistent between 2016 and 2017 with a less than one per cent change (Table 41 and Chart 13). In addition to regular and irregular fishers, Scotland has a small number of Crofters who engage in commercial fishing. There were six crofters in 2017 down from 51 (88% change) in 2016. This may reflect difficulty in identifying which fishers are crofters. Since 2008, employment on Scottish based fishing vessels has fallen 12 per cent. This is composed of a 14 per cent decrease in regular employment and an increase of seven per cent in irregular employment.

Overall, employment in fishing accounts for a higher percentage of employment in island communities (Shetland, Orkney and Na h-Eileanan Siar local authorities) and in Argyll and Bute, where it exceeded two per cent each and one per cent, respectively. This highlights the importance of fishing to these communities (Table 43). 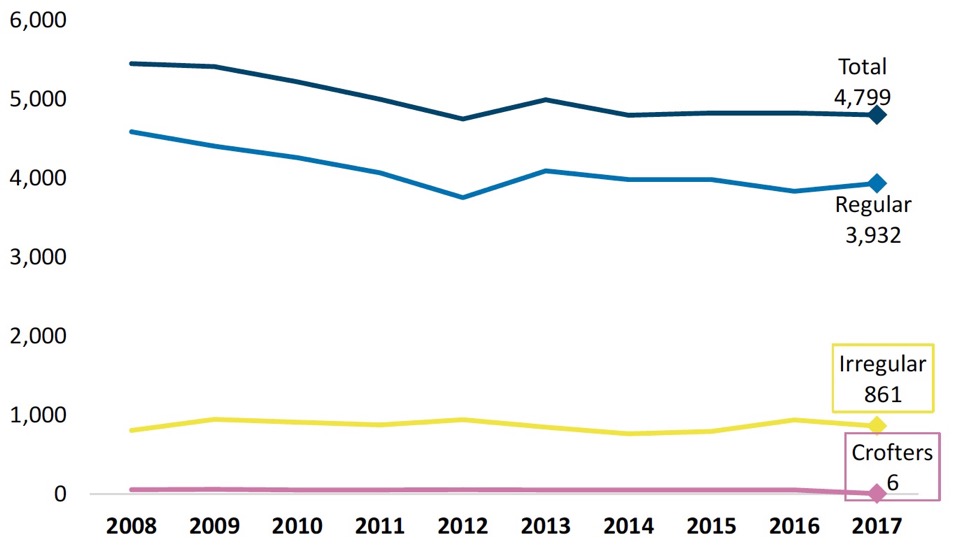