Active Vessel An active vessel is a fishing vessel that is registered and licensed to fish.

Base District A base district is the collection of ports administered by a vessels administration port office.

The extent of the CRZ is illustrated in the map in Annex 6.

The regulated gears are:

Demersal The term demersal fish covers species living on or near the sea bed.

e-Log An electronic log book. Mandatory for vessels of a length of 15m or over.

Entitlements Entitlements are licences which are not attached to an active fishing vessel. A licence entitlement arises when an existing licensed vessel is sold with or without its licence, sinks, is scrapped, or is otherwise deregistered. This is a temporary arrangement.

Fishermen Employed A fisherman is defined as a person working at sea on a commercial fishing vessel, classified as "Regular" or "Part Time" according to whether commercial fishing is their main occupation or not. Crofters who gain some part of their living from fishing are included in the tables (under "Crofters").

Fishing Areas Fishing areas are defined by an international convention. The immediate waters around the UK are subdivided into ICES Sub-areas; IV (North Sea), VI (West of Scotland) and VII. VII is further divided into Western Approaches, VIIg,h; the Irish Sea, VIIa; and the English Channel, VIId,e.

Fishing Effort Fishing effort is a measure of the fishing activity of vessels based on fishing capacity and the time spent fishing. For example, it could be expressed in days at sea or kW days. The Scottish Government's scheme for managing fishing effort in 2012 was called the Conservation Credits Scheme ( CCS). The aim of the scheme is to make sure that stocks of valuable whitefish stocks in Scottish waters, particularly Cod, are able to recover to sustainable levels

Fixed Gears Fixed gears are mainly used for demersal species. They are normally vertically hung curtains of netting which entangle the fish, fixed to the seabed with anchors or weights and held upright with floats.

GRT GRT (Gross Registered Tonnage) is a general term applied to a range of volumetric measures of vessel capacity.

GT GT (Gross Tonnage) is a volumetric measurement of vessel capacity under the rules of the ITC69 (International Tonnage Convention). By the end of 2003 all UK fishing vessels over 15m overall length were required to have their tonnage measured on this basis.

ICES The International Council for the Exploration of the Sea ( ICES) coordinates and promotes marine research on oceanography, the marine environment, the marine ecosystem, and on living marine resources in the North Atlantic.

Inactive Vessel For the purposes of this publication an inactive vessel is a vessel that is registered but not licensed to fish.

Landed Weight Mass (or weight) of a product at the time of landing, regardless of the state in which it has been landed. Landed fish may be whole, gutted, headed or filleted.

Landing Declarations provide information on the species, weight and presentation of landed fish. Under the EU legislation, Scottish vessels landing into the UK are required to submit their log sheets to the authorities within 48 hours of landing for paper or 24 hours if provided electronically. Scottish vessels landing abroad are required to dispatch copies of their landings declaration to the vessels home port within 48 hours or 24 hours for electronic submissions.

Live Weight The mass or weight of a product, when first removed from the water before it is processed aboard the vessel, for example by gutting.

Logbook entries provide details on the time spent at sea including the date of departure and return of a fishing voyage and the date of each fishing operation. All vessels over 12m overall length are required to submit log books electronically. Log books also detail the fishing gear used and net mesh size used for fishing operations. The locations of fishing operations are recorded in logbooks following the international convention to supply positional information defined by ICES statistical rectangles. The corresponding fishing area in terms of ICES divisions is also given. Catch information for each fishing operation include details of the species caught and the quantity of fish retained on board. Scottish vessels landing into the UK are required to submit their log sheets to the UK authorities within 24 hours of landing, while those which land at foreign ports must dispatch copies of their log sheets to the vessels administration port within 24 hours. 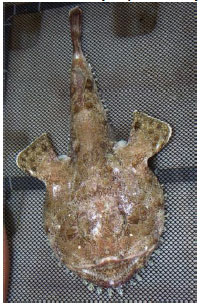 Pelagic The term pelagic fish covers species found mainly in shoals in midwater or near the surface of the sea. E.g. herring and mackerel

Quota Fish quotas are the volume of fish of different species that may be legally landed from defined sea areas by individual EU Member States. The U.K. Quotas are divided up and allocated to Fish Producer Organisations according to the number of Fixed Quota Allocation units held by the Producer Organisation and their member vessels.

Register of Buyers and Sellers In September 2005 a scheme of registration for Buyers and Sellers of first sale of fish and designation of fish auction sites was introduced by the UK Fishery Departments. This requires Sales Notes which provide information on the quantity and value of the first sale of fish as well as details on the grade and freshness. Sales notes should be submitted within 24 hours of sale by the registered buyer of the fish, except at designated auction sites where the seller has the responsibility for submitting sale notes. Registered Buyers and Sellers with an annual turnover of €200,000 in first sale fisheries product are required to submit their sales notes electronically. www.fishregister.gov.uk

Seining Seining is a method used exclusively for demersal fishing. The net, lighter than for trawling, is set on very long ropes designed to herd or contain the fish for capture in the net. After the fish have been surrounded by the ropes, the net is slowly hauled back to the vessel. 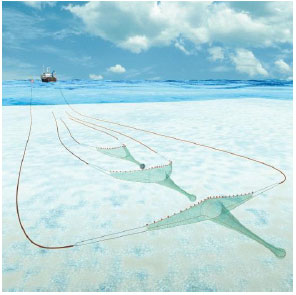 Shellfish The term shellfish covers all crustaceans and molluscs and cephalopods.

Total Allowable Catch (T.A.C.) Total allowable catch is the maximum permitted amount all the EU member states can catch of a given species in a defined area.

Trawling Trawling may be used either for bottom-dwelling (demersal) or mid-water (pelagic) species, the net being of a basic funnel-shaped construction and towed behind a vessel or between two vessels (pair trawling). 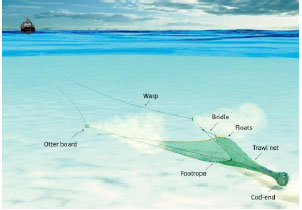 Vessel Monitoring System ( VMS) A GPS system that emits a 'ping' every two hours, providing information on the location of a vessel.