This chapter brings together information on the quantity, value, species and area of capture of sea fish landings. The focus is on Scottish based vessels and landings into Scotland.

1.1 Landings by Scottish based vessels

In 2012, Scottish based vessels landed 365 thousand tonnes of sea fish and shellfish into the UK and abroad with a value of £466 million ( Table 1.1.e and Chart 1.1.). This represents a two per cent increase in quantity but a nine per cent decrease in value in real terms compared to 2011, a record high year for landings value. However, the value of Scottish landings in 2012 remained higher than that landed in 2010.

1.1.1 Demersal, pelagic and shellfish landings by Scottish based vessels

Chart 1.2 Quantity and value of landings by Scottish vessels; percentage of each species type, 2012.

The nine per cent reduction in the value of landings by Scottish based vessels between 2011 and 2012 was driven by decreases in value across all species types (Chart 1.3). In real terms pelagic species saw a reduction in value of 11 per cent, demersal species value fell by eight per cent, whilst the value of shellfish landings decreased by six per cent from 2011. The main driver for the reduction in value across the different species types was the low prices obtained for key fish species (Chart 1.4). However, the vast majority of the total value lost from 2011 to 2012 is attributed to the loss in value of mackerel. Mackerel is the most valuable species to the Scottish fishing industry. It accounted for 28 per cent of the total value of Scottish landings in 2012 and 79 per cent of the value of pelagic landings. The value of mackerel in real terms fell 21 per cent from 2011, even though the quantity landed was only eight per cent lower. Mackerel value was further driven down by a 14 per cent decrease in price, from £1,134 per tonne to £976 per tonne. Mackerel's reduction in value contributed to half of the total loss in value of all landings by Scottish vessels between 2011 and 2012.

Chart 1.4 Percentage change from 2011 to 2012 in the real term price obtained for key fish species.

Chart 1.5.a Quantity and value of landings of the key demersal species by Scottish vessels: 2008 to 2012.

Chart 1.5.b Quantity and value of landings of the key pelagic species by Scottish vessels: 2008 to 2012.

Nephrops are the most valuable shellfish species to the Scottish fishing industry, worth £82.4 million in 2012 and accounting for 18 per cent of the total value of all Scottish landings. The value of Nephrops landings by Scottish vessels decreased four per cent in real terms from 2011. This decrease in value was driven by a six per cent decrease in the quantity landed (21 thousand tonnes) but was buffered slightly by a three per cent rise in the price of Nephrops. The value of scallop landings in 2012 remained similar to that in 2011, despite an eight per cent decrease in price (Chart 1.4). This is a result of an eight per cent increase in volume of landings. This increase in scallop landings represents 1.3 thousand tonnes, offsetting the decrease in quantity landed of the other key shellfish species.

Squid, lobsters and Queen scallops all reduced considerably in terms of value and weight landed between 2011 and 2012. Edible crab value and weight landed remained fairly constant, dropping only three per cent. Squid landings experienced the greatest changes from 2011 and 2012; decreases of 31 per cent in terms of volume landed and 20 per cent in terms of price. This combination resulted in squid dropping 45 per cent of its value, from £9.3 million to £5.1 million. However, the 2012 value of squid is similar to the 2008 and 2009 real term values, suggesting that 2010 and 2011 could have been good years for squid.

Chart 1.5.c Quantity and value of landings of the key shellfish species by Scottish vessels: 2008 to 2012.

1.2 Landings abroad by Scottish based vessels

Landings abroad accounted for 31 per cent of all landings by Scottish vessels in terms of volume and 24 per cent in terms of value. Of this, 86 per cent of the quantity of landings abroad was pelagic; 12 per cent were demersal and two per cent were shellfish. The main species landed abroad was mackerel, contributing £72.9 million, 65 per cent of the total value of fish landed abroad. Mackerel landings abroad have increased in volume by 18 per cent and increased in value (real terms) by nine per cent since 2011. This occurred despite an overall decrease of eight per cent in terms of quantity across all mackerel landings. More mackerel caught by Scottish vessels in 2012 was landed abroad than into the whole of the UK. This could be partly attributed to the difference in price obtained between domestic and foreign landings. The price for mackerel landed into the UK in 2012 was, on average, £939 per tonne, but for mackerel landed abroad fisherman received an average of £1,008 per tonne. This could be an influencing factor for decisions on where to land.

Figure 1.1.a Quantity of landings abroad by Scottish vessels by country of landing: 2012 (tonnes). 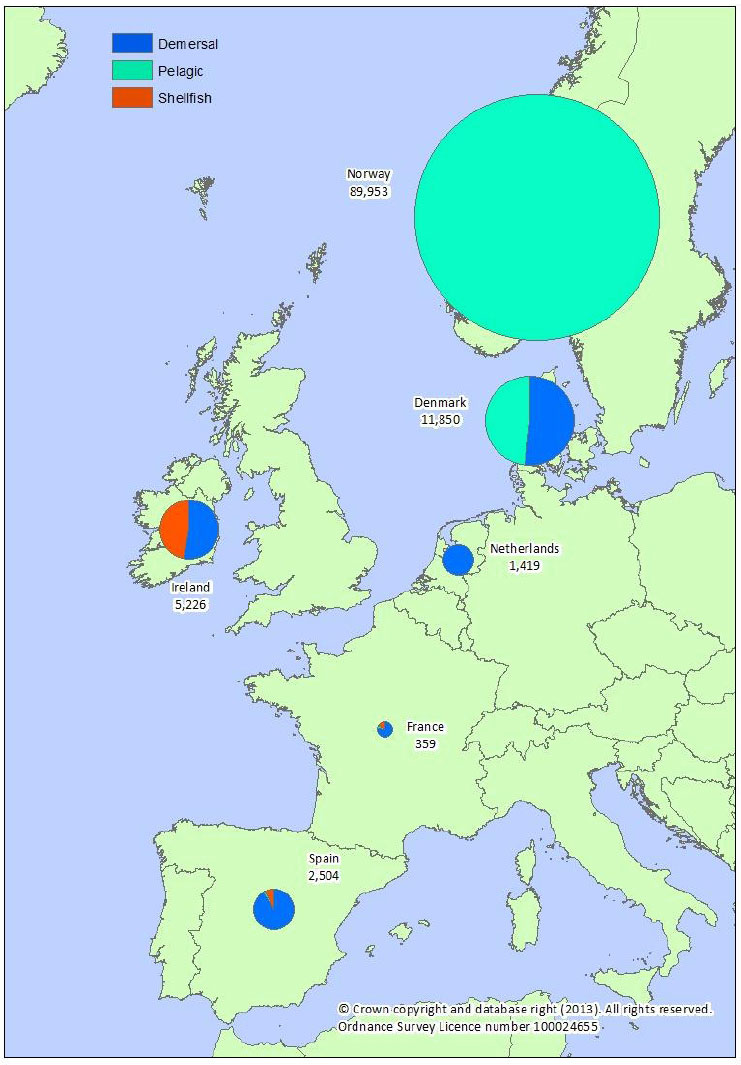 Figure 1.1.b Value of landings abroad by Scottish vessels by country of landing: 2012 (£' thousands). 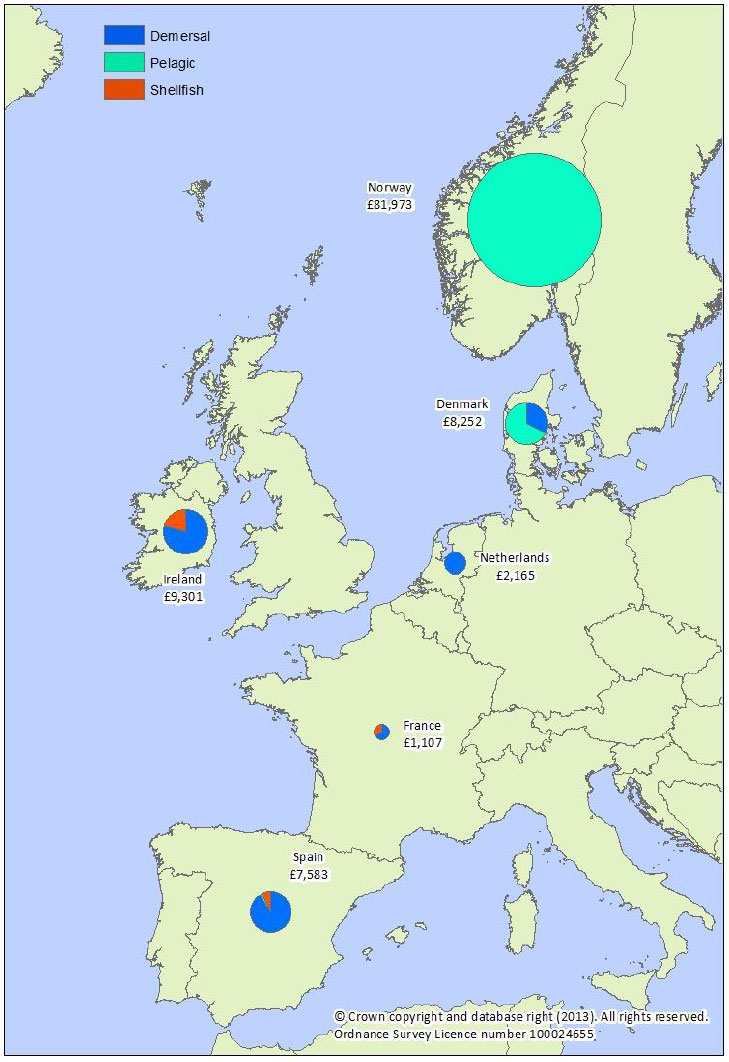 1.3 Landings by area of capture

The two main ICES areas that Scottish vessels were most active in during 2012 were the Northern North Sea ( ICES division IVa) and the West Coast of Scotland ( ICES division VIa) (Figures 1.2.a and 1.2.b). In the Northern North Sea, 161 thousand tonnes of fish were caught with a value of £190 million, representing 41 per cent of the value of all landings by Scottish vessels. Over a third of landings by Scottish vessels, in terms of quantity, were caught in the West Coast of Scotland, providing 37 per cent of the total value of all Scottish landings.

Further maps of fishing activity in the seas around the UK by Scottish vessels, other UK vessels, and foreign vessels that land into the UK will be available on the ICES rectangle webpage on the Scottish Sea Fisheries Statistics website. These maps show the quantity and value of landings by species type by ICES rectangle.

Figure 1.2.a Quantity of landings by Scottish vessels by area of capture: 2012 (tonnes). 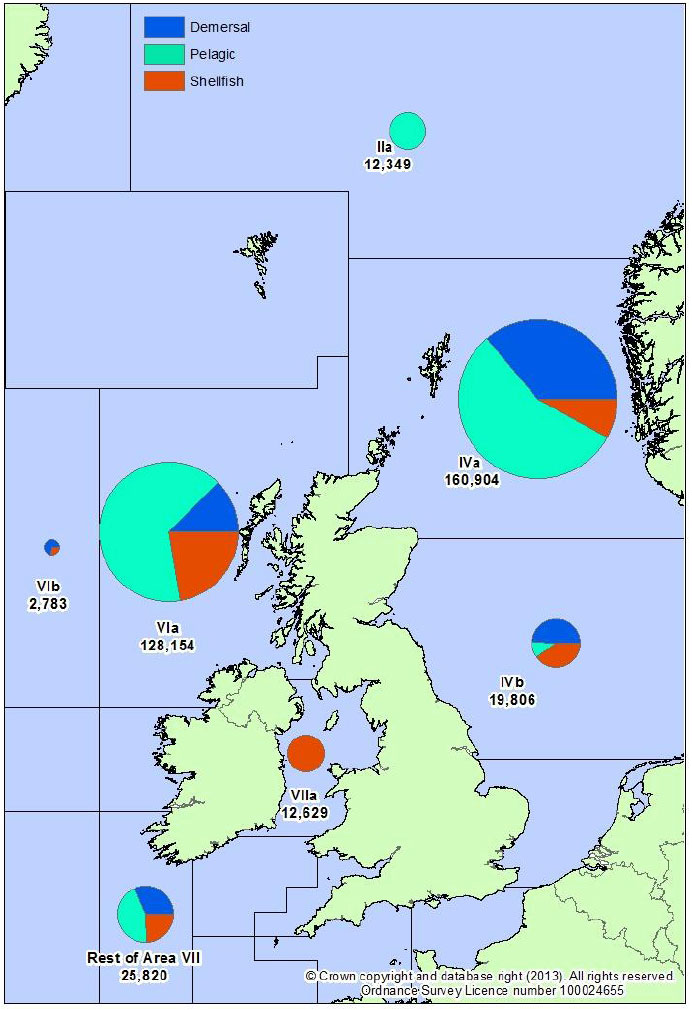 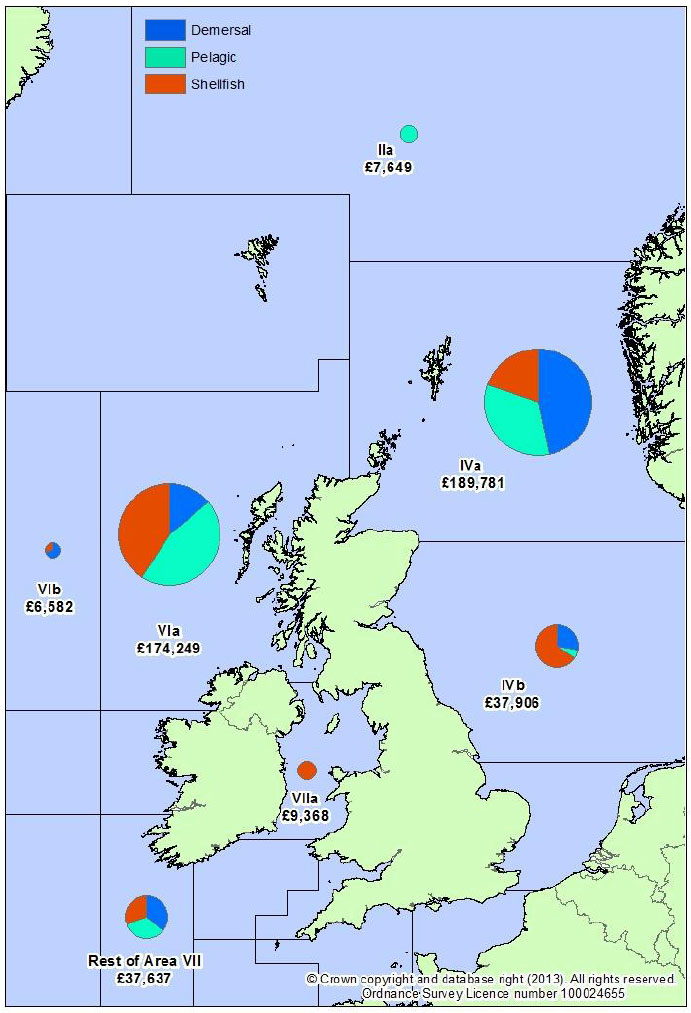 Figure 1.3.a and b show landings by all vessels by species type into the eighteen Scottish districts. Landings into the south-west coast and south-east coast were dominated by shellfish, while landings into the north-west coast constituted both demersal and, to a lesser extent, shellfish species. The three largest districts in Scotland in terms of landings were; Peterhead (east coast), Shetland (north) and Fraserburgh (east coast). These districts receive landings of all three species types, but Peterhead and Shetland receive relatively small amounts of shellfish compared to demersal and pelagic species.

Combined, the top three districts accounted for 74 per cent in quantity and 57 per cent in value of all landings into Scotland. One hundred and fifty two thousand tonnes, worth £142 million, were landed into Peterhead. In terms of volume, two thirds (67 per cent) of the landings were pelagic accounting for 49 per cent of landings value into Peterhead. Landings into Shetland totalled 67 thousand tonnes at a value of £59 million, just over a third less than in 2011. This reduction in value was driven by a 46 per cent decrease in the value of pelagic species landed into Shetland. Pelagic species accounted for 57 per cent of the total value landed into Shetland, whilst demersal species accounted for 36 per cent and shellfish species accounted for seven per cent. In contrast, the third biggest district, Fraserburgh, was dominated by shellfish landings, representing over half the value of the landings. In terms of volume, over half of landings into Fraserburgh were pelagic species and 23 per cent were shellfish landings.

Figure 1.3.a Quantity of landings into Scotland by all vessels by district: 2012 (tonnes). 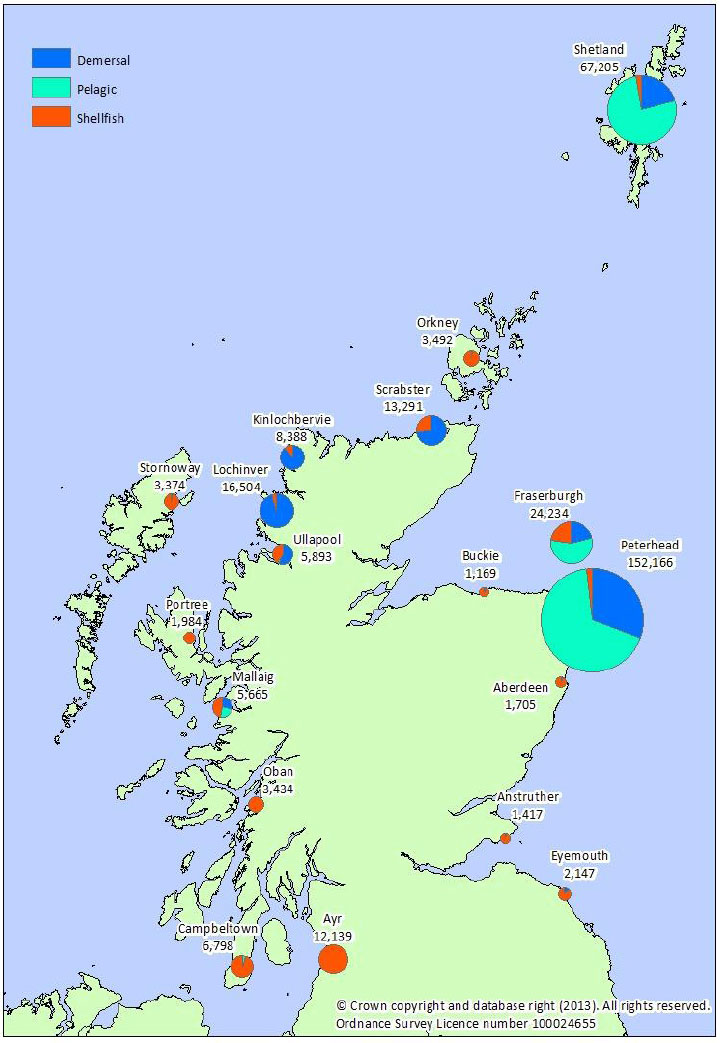 Figure 1.3.b Value of landings into Scotland by Scottish vessels by district: 2012 (£'thousand). 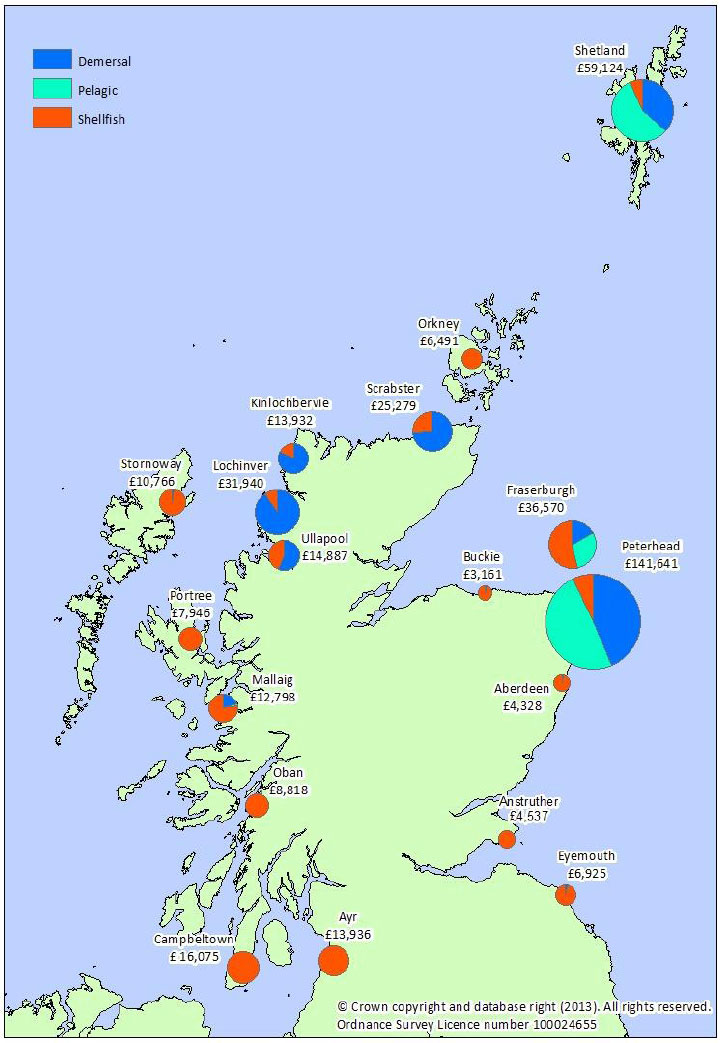 Table 1.10 shows the total allowable catch ( TAC) for stocks. TACs are a catch limit set by the European Commission for individual stocks. TACs are fixed on an annual basis at negotiations held by EU member states. A share of the EU TAC is allocated to EU member states based on a number of factors, including the member state's past catch record. This share, known as quota, is displayed in Table 1.10 at the UK and at the Scottish Producers Organisations ( POs) level. The quantity and percentage uptake of this quota is also given for each stock in Table 1.10.

Chart 1.5 compares the quota uptake of important demersal and pelagic stocks in Scottish Producer Organisations in 2012 and 2011. North Sea cod, haddock, whiting and saithe all exceeded 90 per cent quota uptake in 2012. North Sea Nephrops and monkfish quota uptake was relatively low, at 54 per cent and 62 per cent, respectively. At the end of 2012, North Sea Nephrops uptake was 14 percentage points below what it was in 2011. This is an outcome of the continuation of poor Nephrops availability in the Fladens. North Sea monkfish quota uptake was 26 percentage points lower than in 2011 which was partly due to a slight increase in quota. The West of Scotland demersal stocks had generally lower quota uptakes than North Sea stocks, which is not out of the ordinary. Quota uptake for the important pelagic stocks all reached or exceeded 100 per cent.