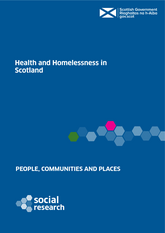 Annex A: Alternative measures of homelessness in Scotland

The HL1 data provides a rich source of homelessness data. However, other data sources exist that could provide useful information in addressing the research questions.

When households seek assistance for housing-related issues from their Local Authority, they may be presented with advice on a range of housing options, including the opportunity to make a homelessness application. This approach, which is known as Housing Options, began to be implemented from around 2009, and more so after 2012, when the priority need test was abolished – this widened access to settled accommodation for all people experiencing homelessness. The aim of the Housing Options approach is to ensure that households are better aware of their options for accommodation, in order to make a more informed choice.

The PREVENT1 dataset was introduced in April 2014 as a way of capturing information on Local Authorities' Housing Options work.

Whilst local authorities have a general prevention duty under section 2 of the Housing (Scotland) Act 2001, Housing Options itself is not specifically defined within a legislative framework. As such, there is no single definition of Housing Options operating across all Local Authorities. Because of the differing approaches to deliver their duty, the local authority figures are not directly comparable with each other.

In direct contrast, the homelessness legislation provides an assessment framework and each assessment decision gives a statutory entitlement to some form of assistance. The operation of the homelessness legislation can therefore be evaluated, by benchmarking against this framework. For example, the proportion of unintentionally homeless households who secure settled accommodation can be tracked over time.

A single year of PREVENT1 data covering 2014/15 was obtained for the study. However, it was decided to omit it from the analysis as it was felt that this would not significantly add to the pool of HL1 data gathered. In addition, the statutory framework surrounding the HL1 data also ensured a consistent definition of homelessness across Scotland and the people included in the study.

The Scottish Household Survey ( SHS) has previously captured data on homelessness in Scotland. For example, in 2015 and 2016, the Random Adult component [52] accommodation section contained multiple questions on homelessness and housing experiences. This includes asking the random adult "Have you ever been homeless, that is, lost your home with no alternative accommodation to go to?" According to the Scottish Household Survey published in 2012, 5.3% of adults living in Scotland said that they had ever been homeless, with 1.9% saying that this has happened to them in the previous two years. This means that about 50,000 adults (1.1% of the adult population) experience homelessness each year [53] . This is based on a sample of 9,890 adults [54] .

During 2015/16, there were around 36,000 homeless applications to Local Authorities. In the same year, just under 30,000 cases were assessed as homeless or threatened with homelessness. This suggests that not all those who have experienced homelessness may necessarily apply to their Local Authority for assistance.

We have not used the Scottish Household Survey in this study because:

Annex B: The homelessness data used in the Study (The HL1 Dataset)
Chapter 11: Discussion